Liverpool will attempt to secure their first major piece of European silverware for 11 years when they take on Sevilla in the Europa League final in Basel, Switzerland, on Wednesday.

Sevilla finished seventh in Spain's La Liga, 39 points behind champions Barcelona, yet cannot stop winning in the Europa League and are looking to win the trophy for a fifth time since Liverpool's Champions League win in 2005 - and the third time in a row.

But who is their main threat? Why are they so good in this competition? Who is the mastermind behind their Europa League success?

Here, we take a look at what awaits Jurgen Klopp's Reds at St Jakob-Park.

Sevilla earned a place in this season's Champions League group stage with a successful defence of their 2014 Europa League triumph - one that ended with a thrilling 3-2 victory over Ukrainian side Dnipro in Warsaw, Poland 12 months ago.

A 3-0 win over Borussia Monchengladbach suggested Los Sevillistas could make an impression and advance to the knockout stages of Europe's elite competition.

It wasn't to be, however, as four straight defeats saw them eliminated from Group D, which also contained Manchester City and Juventus, although the third-placed finish did send them back in their favourite tournament.

Sevilla have owned the Europa League in recent years, with their back-to-back triumphs in the past two seasons following in the footsteps of consecutive wins in 2006 and 2007.

"Everyone connected with Sevilla thoroughly enjoys taking part in this competition, and I've always encouraged everyone to approach it with the passion it deserves," said boss Unai Emery.

Since their first European triumph in 2006, Sevilla have also won the domestic Copa del Rey twice, and will have another chance to lift that trophy when they face Barcelona in the final at Atletico Madrid's Vicente Calderon on 22 May.

That's no accident because Sevilla have fielded some fabulous players in the past decade, including Barcelona pair Dani Alves and Ivan Rakitic, as well as prolific strikers in their prime such as Luis Fabiano, Frederic Kanoute, Alvaro Negredo and Carlos Bacca.

The club's sporting director Monchi has been showered with praise for his ability to repeatedly build high-quality squads packed with ambitious players who are on an upward curve - and the silverware has been fully deserved.

Last season it was Carlos Bacca who was Sevilla's main goal threat. The 29-year-old Colombia international's departure to AC Milan has seen Kevin Gameiro step up to become the forward the opposition fear most.

Half of Sevilla's 14 Europa League goals this season have come from the former Paris St-Germain player, who has proved influential since moving to Spain three years ago.

The 29-year-old France international marked his first season in La Liga with 15 goals and has followed it up with another 24 since.

Gameiro's goalscoring form is excellent, but his biggest asset to the team is his insatiable work rate - and it makes him the kind of player who is a real pain for defenders.

Though he is not particularly physically imposing, Gameiro is fast, strong, has great balance, shows intelligent movement and never stops running. He also has the happy goalscorer's instinct of finding space inside a congested penalty area.

Considering the form he has showed this season and the controversial omission of Karim Benzema, it is somewhat surprising that Gameiro has not been selected in the France squad for their home European Championship this summer.

But it could still be a busy summer for Gameiro because he has been heavily linked with a move to Barcelona, who are looking for an experienced striker to offer cover and competition for Luis Suarez.

"He has a fantastic turn of pace to get away from players and he's very good at getting shots away quickly - a really sharp finisher," said Emery.

"He puts the first line of pressure on the opposition, with his speed and ability in transitions. That's very positive for the team."

Emery does not always get the credit he deserves. He really should be regarded as an elite manager considering the success he has enjoyed throughout his career.

After starting out by leading lowly Lorca and Almeria to promotion, he guided cash-strapped Valencia to three consecutive third-place finishes in La Liga - and the scale of that achievement is underlined by how much they have struggled since he departed in 2012.

The 44-year-old Spaniard then had a brief and unsuccessful stint with Spartak Moscow before returning to Spain with Sevilla, where he has kept the team in the top half of the league as well as masterminding their cup successes.

He was strongly tipped to move to AC Milan last summer before eventually rejecting the Italian giants - but his work with the Andalusians will surely earn him more big-name suitors before long.

While he was at Valencia, Emery worked with Manchester United midfielder Juan Mata before the player moved to Chelsea in August 2011, as well as David Silva, now at Manchester City.

West Ham reportedly wanted Emery before Slaven Bilic was appointed, while Everton have also been linked with the former midfielder since Roberto Martinez was sacked.

Emery is an expert video editor as well as a football obsessive and does not employ a video analyst. Instead he edits footage of his side's opponents himself.

Sevilla have endured a fairly disappointing season in La Liga to finish seventh, but that's mainly because they have suffered a series of disappointing results against lower-ranked opposition.

In the big games they have been excellent, beating Barcelona,Real Madrid and fourth-placed Villarreal at home - and they also defeated Juventus in the Champions League group stage on their own turf.

Their route to the final has included impressive wins over La Liga rivals Athletic Bilbao and Shakhtar Donetsk.

However, Liverpool will be encouraged by Sevilla's poor form away from their Ramon Sanchez Pizjuan home.

They were the only team in La Liga not to win on their travels in 2015-16, while their away success in the Europa League was a 2-1 victory in Bilbao.

Emery and his highly regarded sporting director Monchi have built an extremely strong squad with plenty of depth, and that is particularly the case in midfield where a wide range of options are available to support Gameiro.

Perhaps the most important player is the talented Argentina international Ever Banega, who is enjoying a real renaissance after being rescued from a frustrating spell at Valencia when he joined Sevilla two years ago. 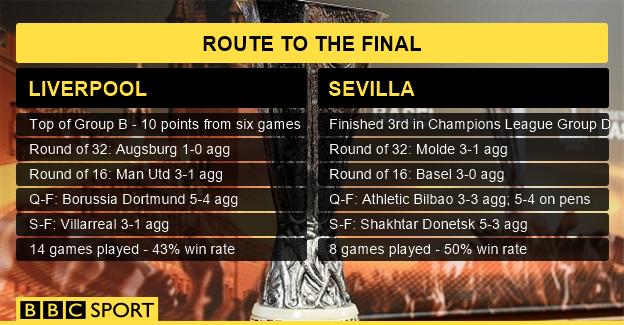 Although he often only appears from the bench, the ace in the pack could prove to be Konoplyanka, who is Sevilla's most naturally talented player. His ability to cut in from the left wing to shoot, or deliver dangerous balls into the box from either flank, makes him a real potential match winner.

There is another familiar name in the shape of Steven Nzonzi, the former Blackburn Rovers and Stoke City midfielder.

The 27-year-old Frenchman has been a regular starter during Sevilla's Europa League campaign - despite being sent off three times this season.