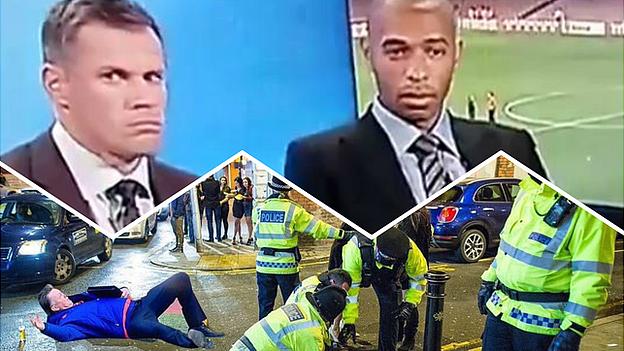 Tweeting explosions, biting memes and vines looping the exquisite farce of the Premier League soap opera - the twists, turns, highs and lows of the 2015-16 season were captured brilliantly on social media.

By bringing together some of the best content we remember the moments that made us 'ROFL' or 'SMH' or both.

It would be folly to start anywhere else but Leicester City.

The naysayers declared there was more chance of finding Elvis alive than the Foxes winning the title. In fact the odds for both occurrences were the same - a generous 5,000-1.

The bookies forked out an estimated £20m on Leicester's achievement, now if 'The King' reappears that would definitely have them all shook up.

One Leicester fan who should keep his hip swinging to a minimum at the start of next season is Gary Lineker.

This is what the Match of the Day presenter tweeted in December:

And this is a mock up of what it could look like (a bit generous perhaps): 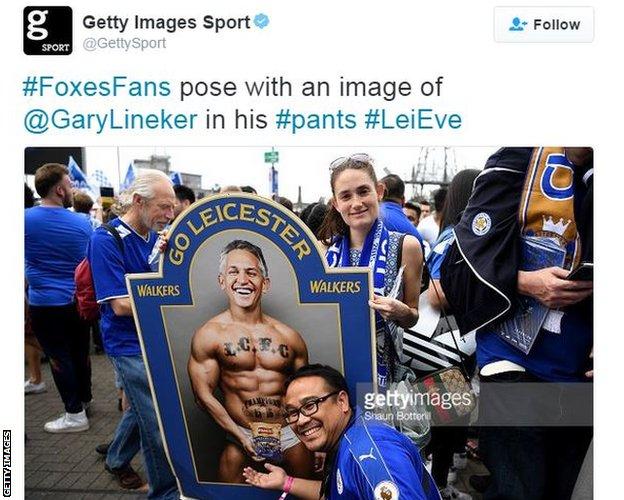 Week after week Leicester and their players were among the top trending topics, culminating in the explosion that occurred on 2 May moments after Tottenham's dreams were obliterated.

By this point the 'Vardy Party', which will undoubtedly become a club night in the city, was well and truly under way at the striker's home.

England player Jamie Vardy, or was it his lookalike, partied like it was 1999 (RIP Prince) with as many of the squad he could cram into his... eight-bedroom £1m mansion.

It was perhaps fitting that captain and tattoo parlour aficionado Wes Morgan, having performed heroics throughout the campaign, provided one of the moments of the social season when he was dragged along the kitchen-come-dancefloor.

There weren't too many other clubs who deserve a slap on the back, but a special mention should go West Ham, Bournemouth and Watford.

The Hammers' beanie-wearing manager Slaven Bilic inspired his side to some memorable wins - coming back from 2-0 down to beat Everton, the FA Cup extra-time victory over Liverpool, to name two. A top-seven finish is a great way to say #FarewellBoleyn.

His chief playmaker in the success was Dimitri Payet - a summer signing who turned free-kicks into an art form, literally.

Cherries boss Eddie Howe, who we discovered has a penchant for breakfast-time news conferences, and Hornets counterpart Quique Sanchez Flores, fresh from apparently filming The Night Manager, ruined many a pre-season Premier League prediction. Including this one:

Where do we start?

Chelsea's implosion was perhaps the most spectacular. They were a strong tip to retain their title, but by the end of December they were 16th and an outside bet to go down.

The ultimate ignominy was having to again sack the club's Special One, Jose Mourinho, resulting from several contributing factors. Or perhaps the ultimate jibe was West Ham's co-owner's tweet after his side defeated the beleaguered Blues back in October.

As for another strong favourite, Manchester City, their season followed a similar trajectory to this trending graph below which highlights the moment when it was confirmed Pep Guardiola would be taking charge of the team from next season.

The red half of Manchester spent an astonishing £36m (rising to an even more astonishing £58m) for a teenage forward many of us only became familiar with on the day he signed.

Louis van Gaal's side were beset by injuries during a curious campaign which finished with the side missing out on a Champions League spot but with a place in the FA Cup final. Van Gaal out? Read below.

As for Arsenal, move aside 'Brexit', the big 'in or out' debate trotted out was whether Arsene Wenger should remain manager of the Gunners or not.

Aside from the fact the Frenchman led the side to second place and a 20th (TWENTIETH) successive Champions League qualification, he continues to be pilloried more by his own supporters than those who don't follow the club.

The committed leader of 'Wengxit' was in full campaign mode when in April the Gunners boss suggested that his side played in a "difficult climate" at home.

And Everton? All those very good international players and a manager who endeared himself to many with his football philosophy and dancing to Jason Derulo - where did it all go wrong?

Will they? Won't they? How dare they!

There is a lot to be said for managing a so-called lesser club whose seasonal expectations do not amount to more than mid-table safety.

The pressure gauge was ticking low for the likes of Howe, Mark Hughes and, to a lesser extent, Alan Pardew, but for others speculation of their futures was rife.

City's Manuel Pellegrini seemed to be the last person to know he was going to be replaced by Pep Guardiola, although he does have a great poker face.

And, as touched on above, Van Gaal's future has been questioned - often directly at the man himself - since it was reported United chiefs had spoken to Mourinho about taking over next season. The Dutchman is contracted at Old Trafford until the end of the 2016-17 campaign.

Fans have had a love-hate relationship with him. 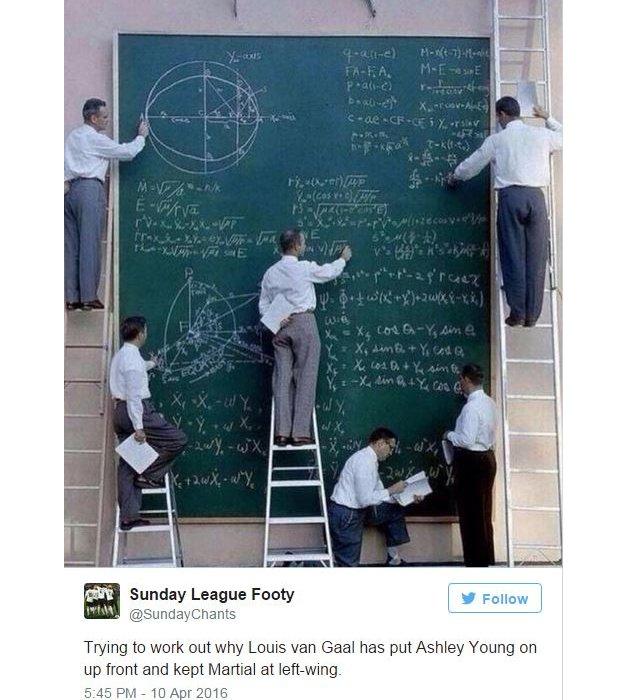 Whether the Premier League is treated to another season of the Dutchman's idiosyncrasies remains to be seen.

There were 10 'partings of company' this season - up five from the previous season, but down two from the 2013-14 campaign.

The first of those took place one Super Sunday at the beginning of October when both Sunderland's Dick Advocaat and Liverpool's Brendan Rodgers were booted from the boot rooms.

The live announcement of Rodgers' sacking on Sky Sports prompted the normally unruffled Thierry Henry to ruffle the trousers of fellow pundit Jamie Carragher, which in turn became one of the most shared football clips of the season. 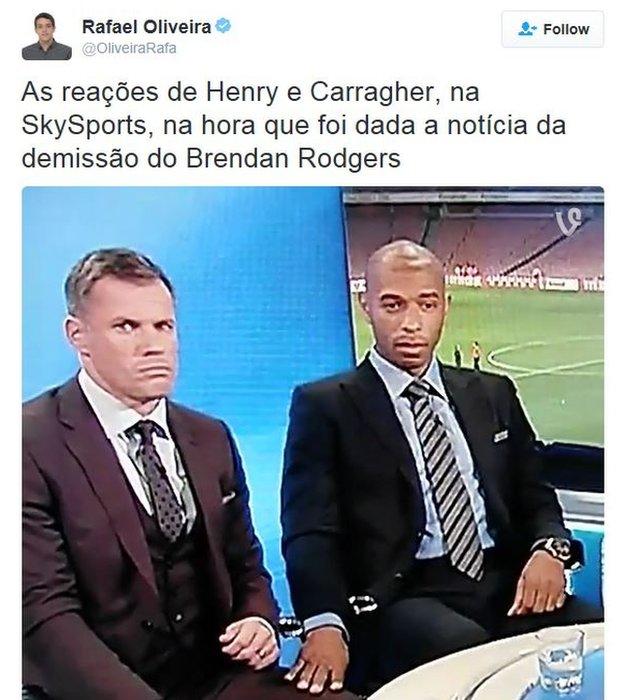 Tim Sherwood was next to depart later that month after leading Aston Villa to rock bottom, where they remained. Remi Garde, another young gaffer but minus the rogueish Home Counties charm, also went the same way in March.

In what was a disappointing season for gilet-wearing managers, Garry Monk cleared his desk in December after leading Swansea to only one win in 11 league games.

Chairman Huw Jenkins said: "The decision has been made very reluctantly and with a heavy heart." So perhaps you should have kept him?

The big one came a week before Christmas when Mourinho, who had been on the brink for a while, was sacked by Chelsea for a second time.

His side had almost done an 'anti-Leicester' by winning the title then performing dismally the following season. It seems to be either Manchester United or... Indonesia (?!) for the Portuguese.

Next on our list is Steve McClaren, who held his brolly firmly to protect himself against the hail of criticism during his nine months at Newcastle. He spent north of £80m on transfers and departed with the club in 19th - best to leave that off the CV.

Everton's Martinez had been hanging on a thread for a couple of weeks, until somebody grabbed the scissors on 12 May.

Both Pellegrini and Sanchez Flores said their goodbyes on the final day.

The fate of the Spaniard - who led the Hornets to the FA Cup semi-finals and 13th place in the Premier League - was decided last week after both parties failed to agree whether the season was a success or not. The league will be a poorer place without his rustic appearance.

Not since X Factor series one has there been this much excitement about up-and-coming British talent.

Dele Alli took to the Premier League like a bottle to a Manchester United coach, with 10 goals in his debut top-flight season including that incredible strike against Crystal Palace in January.

The 20-year-old was voted the PFA Young Player of the Year, and was shortlisted alongside team-mate Harry Kane, 22, who had another stellar campaign - that's now 59 goals in two seasons.

Kane ditched his vanilla demeanour to post a photo of hunting lions in April to suggest Tottenham were closing the gap on leaders Leicester.

Foxes counterpart and England colleague Vardy responded during some respite from the 'Vardy Party':

At Manchester United, even the hardcore fans were asking "Who?" when first defender Cameron Borthwick-Jackson and more notably striker Marcus Rashford were introduced to the fold.

Rashford was a last-minute addition to the starting line-up for their crucial second-leg match against Midtjylland in the Europa League. He scored twice to help United to a 5-1 victory and then grabbed two more against Arsenal on his Premier League debut, on his way to seven goals in 16 appearances.

With the addition of an England call-up, how is he supposed to concentrate on his A-levels?

France forward Martial, 20, who in September cost £58m more than Rashford, began his Old Trafford career in spectacular fashion with four goals in five games during what has been an impressive debut campaign. He was rewarded for his exploits with the Facebook Football young player of the year award. Like. 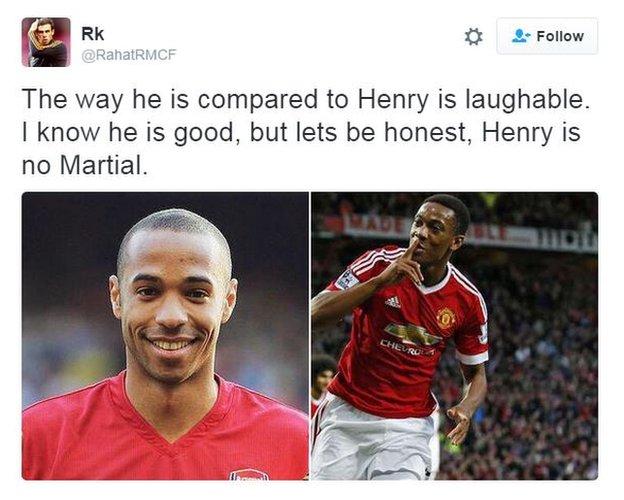 Perhaps Manchester City's Kelechi Iheanacho might feel slightly hard done by that he was not in the running for any major awards having netted 13 times this season, often after coming on as a substitute.

If the 19-year-old goes on to great things then Pellegrini would have left one heck of a legacy, though not many City fans would be about to praise him.

The battle for survival

With the exception of Aston Villa, who appeared hell bent on finishing bottom, all the relegation issues were not decided until the final week of the season.

The fight for the remaining two places - aka the Race for the Championship - was settled last Wednesday when Sunderland secured their Premier League status with a 3-0 win over Everton and in turn sent both Norwich and Newcastle to the gallows.

The Magpies replaced McClaren with Rafael Benitez, but to no avail. Former midfielder Joey Barton targeted owner Mike Ashley, who in his nine years at the helm has overseen two relegations. Do you get a Blue Peter badge for that?

The satirical Suffolk Gazette could not resist having a pop at Norfolk's beloved TV cook and Norwich's majority shareholder:

The final word belongs to Sunderland boss Sam Allardyce, who was brought to the club in October with the Black Cats 19th and winless in their opening eight games.

A few months later and he has managed to maintain his record of never taking a club down. 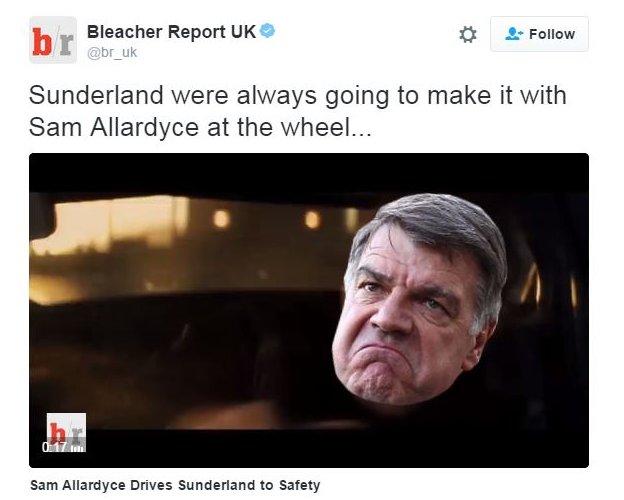 They thought it was all over...

With all the major issues decided, it seemed like the Premier League season would ease into a Yaya Toure jog on the final day.

How wrong we were.

By this stage, large sections of Old Trafford had already been evacuated. Speculation followed as to what the suspect package was and who could have been the perpetrator(s).

The Greater Manchester Police stated it was an "incredibly lifelike" device, before it was later revealed to be a dummy device accidentally left behind after a security exercise. As you do. 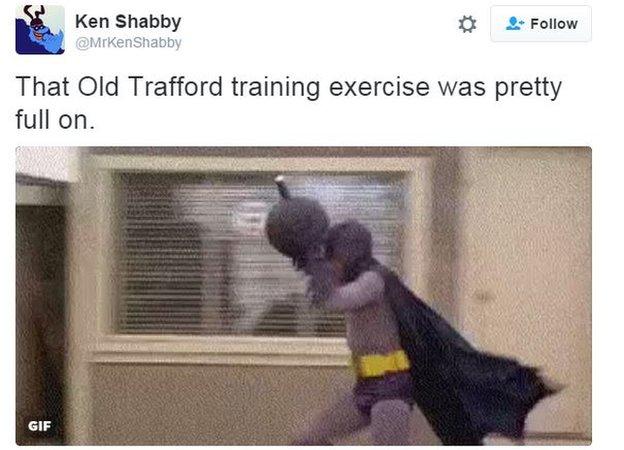 Away from those explosive events, we witnessed one of the most remarkable results of the season at St James' Park where relegated Newcastle defeated Tottenham 5-1.

Benitez, still pondering whether a wet Tuesday night in Rotherham is enough for him to commit to the Magpies, roused both the fans and players as Spurs capitulated.

What was more galling for Spurs was that by caving in they also lost second spot to north London rivals Arsenal. Gunners fans celebrated 'St Totteringham Day' on social media - the point in the season where Spurs can no longer finish above Arsenal. 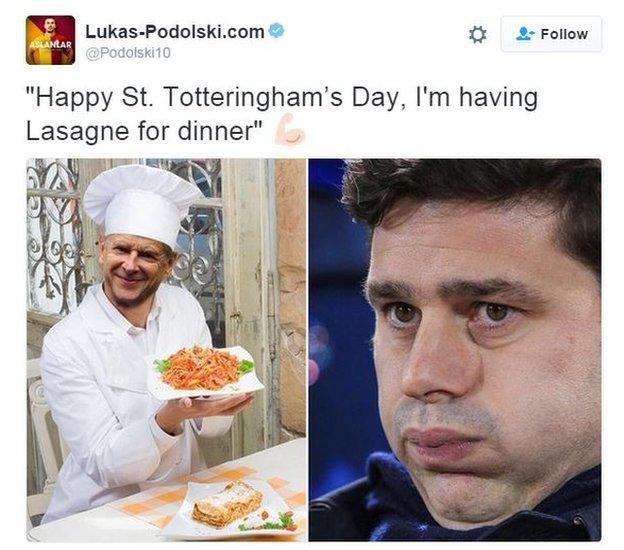 The league campaign eventually came to a conclusion on Tuesday, 18 May when Manchester United played their delayed game against Bournemouth.

The match finished 3-1 to the men in red.

They thought it was all over, it is now.