West Ham co-chairman David Sullivan has apologised to Manchester United after their team bus was damaged before Tuesday's game at Upton Park.

In an interview with BBC Radio 5 live a few minutes after the incident, Sullivan said there had been no attack on the coach.

But he backtracked in a message posted on the West Ham website on Wednesday.

He said he had been "unaware of the damage that had occurred" at the time and vowed to "track down" the culprits.

West Ham have already said they will issue life bans to any fans found responsible for the attack, which smashed a window on the bus and delayed the kick-off by 45 minutes.

Bottles were also thrown at Manchester United goalkeeper David de Gea during the Premier League match, while another fan invaded the pitch to confront the Spaniard.

Tuesday's game, which West Ham won 3-2, was the last at the Boleyn Ground before the Hammers move to the Olympic Stadium.

The Football Association has also condemned the "unsavoury incidents" and plans to work with both clubs and the Metropolitan Police to investigate the matters.

"If we were to have scripted how our final game at the Boleyn would have played out, it wouldn't have been much different to last night's match," Sullivan added.

"The West Ham family then all celebrated our legends and former players together in what was a truly fitting ceremony to say goodbye to our home of 112 years.

"Sadly, the actions of very small minority of people outside the ground prior to kick-off risks overshadowing those celebrations. Their behaviour was completely unacceptable and does not represent our club or our values."

The Metropolitan Police said on Wednesday that four police officers had been injured during the trouble but no arrests have been made over criminal damage to the coach.

Three men were arrested during the game, including a 20-year-old on suspicion of affray and a 47-year-old and 18-year-old for pitch incursion.

Officers from the Met's Central Football Unit are looking at CCTV footage and have appealed for witnesses. 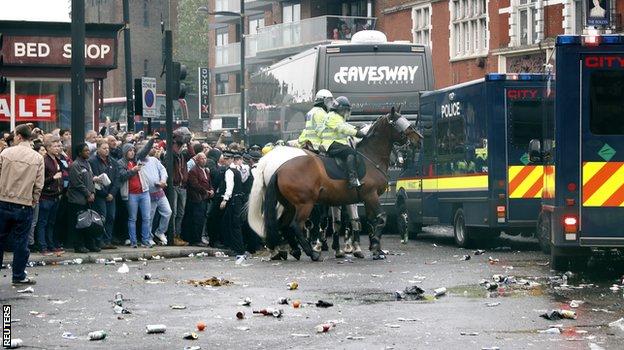