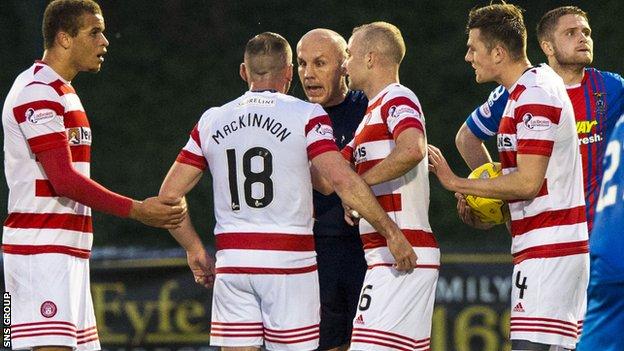 Manager Martin Canning thinks Darian Mackinnon was unfortunate to have been sent off as Hamilton lost their final home game of the season to Inverness.

The Accies midfielder received two yellow cards during the same second-half incident, one for fouling Iain Vigurs and another for his reaction.

"He's stopped, to protect the ball and be aggressive but I didn't think it was a foul or a booking," said Canning.

"The referee's said he then said something but for me it was very soft."

Canning discussed the red card with the match officials after the match and he felt that his players were on the end of a few harsh judgements.

Early on, Eamonn Brophy surged into the penalty area, only to fall to the ground after colliding with an Inverness defender.

"It looked [a penalty] to me, but I thought all game we didn't get much," Canning said.

"The result wasn't the way I wanted it to go, but performance-wise I thought the boys were excellent.

"I thought first-half we lost a sloppy goal, but in the second half we were dominant at times. I'm happy with the performance, but it's another defeat here, which I'm not happy about."

Inverness scored when Iain Vigurs took a quick free-kick that then enabled Danny Devine to squeeze the ball past the Hamilton goalkeeper Michael McGovern.

The three points mean that John Hughes's side sit seventh in the table going into the final game of the season against Dundee, the only other side that can finish top of the bottom six.

"It's all set up nicely, to finish with a win on Saturday and get that seventh spot," Hughes said.

"But we're playing a good Dundee team, the teams are very close, so we'll have to play a lot better than we did in the second half.

"First-half, I felt we were very good, could have passed it quicker and better but we dominated the game.

"Second-half, I felt we sat back, hoping we could keep a clean sheet and even when they went down to 10 men, we never really put a foot on the ball and passed it.

"Hamilton were galvanised going down to 10 men and were the better team for the last 20 minutes, so we're delighted to win."