Manchester United have thanked fans for returning to Old Trafford for a rearranged game with Bournemouth, two days after it was abandoned.

Sunday's game was called off before kick-off after a suspect device - which turned out to be a dummy bomb - was discovered in a toilet.

However, some estimates suggested as many as a third of fans did not return for the rescheduled fixture.

Fans faced strict security controls in and around the ground before kick-off.

After Sunday's game was called off, United agreed to refund all tickets and to allow ticket holders from both clubs to watch the rearranged game for free.

Bournemouth then offered away fans with valid tickets free coach travel for the 500-mile round trip to the rescheduled fixture.

United have the highest average attendance in the Premier League, at 75,000, and it is estimated that their ticket gesture will cost the club about £3m.

United went into Sunday's final round of Premier League fixtures with a chance of qualifying for next season's Champions League, but Manchester City's draw at Swansea meant Louis van Gaal's side needed an unlikely 19-goal victory on Tuesday.

"Manchester United are known for their worldwide support and it is true that fans tend to come from far and wide to games at Old Trafford.

"Evidently, with the FA Cup final to come on Saturday, many decided, at 48 hours' notice, this was a match too far.

"United count season ticket holders in their attendance figures whether they are present or not. Officially, since the ground was expanded to its current capacity, their lowest Premier League crowd was 73,401 for the visit of Stoke in January 2011.

"I can say with absolute certainty that the crowd tonight is below that, although the same could be said for the visits of Aston Villa and Crystal Palace last month, when higher figures were recorded."

The Sir Alex Ferguson Stand and the Stretford End were evacuated and sniffer dogs brought in to search the ground, with an "operation red code" alert issued over the public address system.

Supporters who were still in the ground were advised to stay in their seats while the forecourt was cleared of fans who had been in the two evacuated stands.

Fans were then advised that, because of the discovery of a suspect package in the north-west quadrant of the ground, the match was "abandoned" on police advice.

A bomb disposal team carried out a controlled explosion at about 16:30 BST, around the same time United players were seen leaving the ground.

It emerged later on Sunday that the device, found in a toilet, was left accidentally by a private firm carrying out a training exercise at the ground on Wednesday.

Fourteen mock explosive devices were used in Wednesday's exercise. That included the elusive device hidden behind a toilet door, which would have made it visible only from inside the cubicle.

Chris Reid, boss of Security Search Management & Solutions Ltd, said he wrongly logged the "mock up of a pipe bomb" as found.

Greater Manchester Mayor and Police and Crime Commissioner Tony Lloyd has called for a full inquiry into the "fiasco".

Meanwhile, executive vice-chairman Ed Woodward stressed United and the police "would ensure that robust security measures continue to be of the highest priority" for the rearranged game. 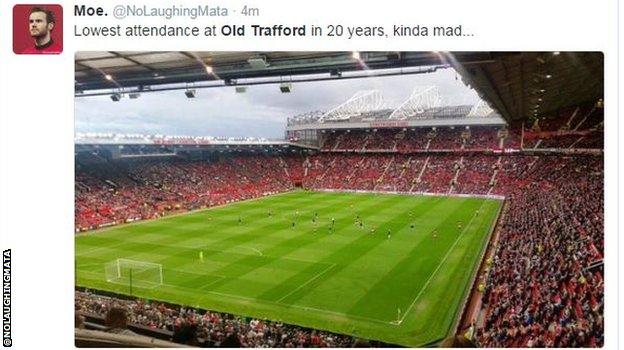