Wayne Rooney sees his Manchester United future in midfield after impressing in the role during Tuesday's 3-1 win over Bournemouth at Old Trafford.

The England captain scored the opener and set up Ashley Young for the third.

"Sometimes you have to make choices in your career and at the moment it's better for me to play deeper," he said.

"It could be a bit different for England where I could still be the striker but probably next season that's where I see myself playing."

"I'm sure Roy Hodgson will have his ideas of where he thinks is best for me," Rooney, 30, told BBC Sport.

"It could be where I play for England, but that's down to Roy. I'm sure we'll speak when we meet up and he'll tell me where he wants me to play."

Rooney, England's all-time top scorer with 51 goals, is only four off Bobby Charlton's club record of 249 goals for United.

His goal on Tuesday was his 100th Premier League goal at Old Trafford.

Where should Rooney play this summer?

BBC Sport have launched an England XI team selector, which lets you choose who you think should start at Euro 2016. 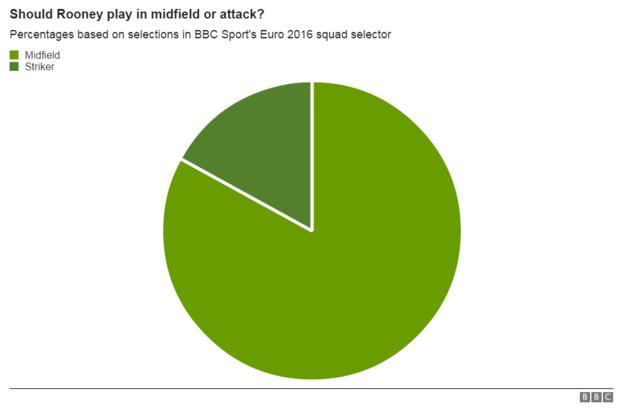 When chosen in a traditional 4-4-2 formation - the most popular shape - just 7% had Rooney as one of their two strikers. But in that same formation, he got 200,000 picks as a midfielder - putting him as the third choice behind Tottenham pair Dele Alli and Eric Dier.