Celtic have appointed Brendan Rodgers as their new manager.

The former Liverpool, Swansea City, Reading and Watford boss has signed a 12-month rolling contract to replace Ronny Deila, who departed the Scottish champions at the end of the season.

Rodgers, 43, left Anfield in October after more than three years in charge.

"I will give everything I have and do all I can to bring our supporters exciting, entertaining and winning football," said the Northern Irishman.

Rodgers can give Celtic hope - Sutton

"The club has been in magnificent shape in recent years and has collected silverware regularly during this time.

"My objective now, of course, is to continue this work, to keep us at the top and again make our mark in Europe." 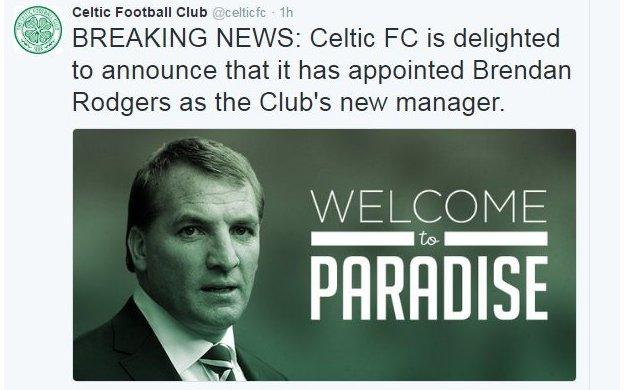 Speaking to the BBC earlier this week, Celtic's largest individual shareholder Dermot Desmond described Rodgers as "a great manager", adding that the Scottish Premiership club had interviewed "in excess of six" candidates,

It also emerged that Rodgers met club representatives for several hours on Wednesday.

"Brendan is a highly-sought after manager and we are pleased we have been able to bring such a high calibre individual to Celtic," said chief executive Peter Lawwell.

"I know Brendan feels privileged to be named Celtic manager and he will bring huge experience, knowledge and ability to the role.

"We wanted to bring one of the biggest and best names to the club to match our own aspirations and those of our supporters - we believe, in appointing Brendan, that we have done this.

"We have appointed a special manager and we are sure he can bring some special times to Celtic."

'There's no doubt about his qualities'

Rodgers moved into management with Watford and subsequently had a spell in charge of Reading before leading Swansea City to promotion to the Premier League.

A switch to Liverpool followed and Rodgers came close to the title in 2013-2014, finishing two points behind Manchester City. However, he left Anfield without winning a trophy.

Rodgers will come up against Rangers manager Mark Warburton next season, with the two men having worked together on the coaching staff at Watford.

John Hartson, a former Celtic striker is also a fan of Rodgers and believes his appointment will be warmly greeted by the Celtic supporters.

"I think they've got themselves a proper manager of the highest regard," the former Wales international said.

"I think he'll do very, very well. It's a great opportunity for Brendan and I think the fans will embrace his appointment. "

Former Celtic manager John Barnes is not surprised that the club have managed to lure Rodgers.

"He will not view it as a step down, despite what others will think," he said. "Celtic is a huge club. They are in the Champions League and I'm sure Brendan would want to pit his wits against the big sides there.

"The fans can expect a very exciting brand of football. In terms of playing the Celtic way, they couldn't pick a better man for the job."

"For Celtic, the most comparable spell has been Rodgers' time at Swansea - an aspirational club, with a well-defined budget, and a sense of momentum.

"The Northern Irishman embraced the club's past, but also redefined its horizons, taking them into the Premier League and then to 11th place.

"He signed shrewdly, seeking talented players who had not been coveted by larger clubs or were not yet ready for that stage, and moulding them into a side that played attractive, engaging and artful football."

'Rodgers' Swansea model can be a success at Celtic'