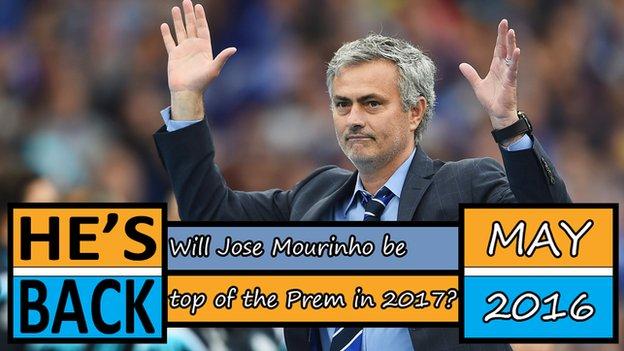 Jose Mourinho's appointment as the next Manchester United manager in succession to Louis van Gaal was finally concluded on Friday.

The 53-year-old Portuguese will be charged with bringing back the domestic and European successes of the Sir Alex Ferguson era - plus the sort of winning, exciting football "the Theatre Of Dreams" demands after the boredom of the David Moyes and Van Gaal eras.

So what will be Mourinho's top priorities on his countdown to success?

There is certainly enough around Manchester United to set up a fire sale - so who might Mourinho target? There are plenty of under-achievers that might catch his attention.

Mourinho likes experience but 31-year-old Bastian Schweinsteiger, once undoubtedly world class, is injury-plagued and past his best, while Michael Carrick is 35 in July and out of contract. Mourinho may feel they are surplus to requirements.

Memphis Depay, a flop since his £19m move from PSV Eindhoven, does not fit the Mourinho template and Van Gaal did not even consider him worthy of a place in United's FA Cup final squad.

And what about the likes of Phil Jones and Marcos Rojo? Jones was once considered one of England's brightest products but has struggled with an ankle injury this season while Ashley Young, Morgan Schneiderlin and Ander Herrera will come under close scrutiny.

Juan Mata is one of Manchester United's most popular figures, with players and fans alike. This will only have increased with his equaliser in the FA Cup final win against Crystal Palace.

The 28-year-old held similar status at Chelsea but it cut no ice with Mourinho when he felt Mata was not mobile or pacy enough around the pitch, and did not contribute enough defensively, for his needs.

Mourinho was happy to sanction his £37.1m sale to United in January 2014 and was vindicated as Chelsea won the Premier League the following season. His arrival does not sound like good news for one of the game's genuine nice guys.

Mourinho's appointment means Ryan Giggs is once again passed over for a job many - maybe even a few in United's hierarchy such as Ferguson and Sir Bobby Charlton - thought would be his.

Giggs played 963 times for United, winning 13 Premier League titles, four FA Cups and two Champions Leagues, but will there be any place for him on Mourinho's tried and trusted backroom team?

He has been the virtually silent sideman to David Moyes then Van Gaal. Mourinho always works with coaches Rui Faria and Silvino Louro - what influence would Giggs have and would he simply be a symbolic nod to United's traditionalists?

It may actually be time for Giggs to go elsewhere and prove his managerial credentials for the United job rather than remain as a token appointment.

Manchester United pride themselves on a certain style and Sir Bobby Charlton has publicly expressed doubts about Mourinho's demeanour in the past, adding: "He pontificates too much."

It was also suggested Ferguson has not been fully sold on the idea and it may be United will demand Mourinho ditches the confrontational approach that has brought him into constant conflict with authority throughout his career.

Mourinho has shown nothing but reverence for Old Trafford and its traditions in the past. He is smart enough to understand there will be those who do not see him as the right profile for a Manchester United manager - he can ease those fears by finally learning lessons then dealing in the currency he knows best, success.

Manchester United have a rich history of developing their own players and watching with pride as they graduate to senior level. There were "the Busby Babes" in the 1950s and of course "The Class Of 92" with Giggs, Paul Scholes, Gary and Phil Neville, David Beckham and Nicky Butt.

Mourinho, in contrast, has earned a reputation for a reliance on battle-hardened players he can count on, an image not helped by Belgian pair Romelu Lukaku and Kevin de Bruyne failing to flourish under him at Chelsea. 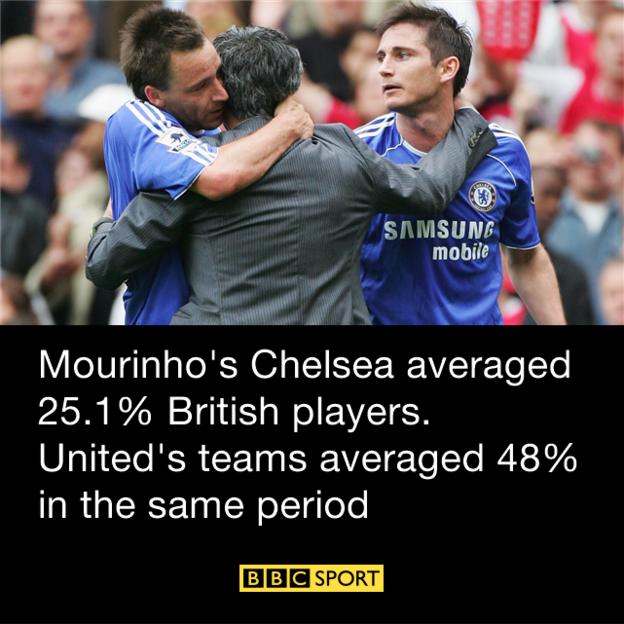 They had to go elsewhere to fulfil their potential. De Bruyne was sold to Wolfsburg for £19m in January 2014 while Lukaku was sold to Everton in summer 2014 in a £28m deal. De Bruyne, 24, moved to Manchester City for £55m last August and Lukaku scored 18 goals for Everton this season. He is currently being linked with a £65m move back to Chelsea.

Mourinho has youth to work with in the brilliant attacking pair of 18-year-old Marcus Rashford and Antony Martial, 20, while Jesse Lingard - scorer of the winning goal in this year's FA Cup final - Cameron Borthwick-Jackson and Timothy Fosu-Mensah are all earmarked as stars who should flourish, not be cast aside.

Even 21-year-old Adnan Januzaj, currently an outcast after a failed loan spell at Borussia Dortmund, is a player United retain high hopes for.

And in Mourinho's defence, it is worth stating that when Chelsea won the title in 2004-05, they did it with the youngest average age of any side in Premier League history, under 26.

Old Trafford's "Theatre Of Dreams" tag has been tarnished by the dullness of the last three seasons under Moyes and Van Gaal - and questions have already been raised about Mourinho's pragmatic approach that has winning as its sole objective.

He will need to add some dash and flair to enliven Old Trafford and reignite a fanbase that has too often been bored into submission in recent years.

It is a fallacy, however, to suggest this is beyond Mourinho and the statistics back him up.

When Chelsea won the league in 2014-15 they scored 73 goals, 10 fewer than Manchester City in second but two more than Arsenal, so often held up as the romantics' dream.

When he won his second title with Chelsea in 2005-06, they equalled the tally of runners-up Manchester United with 72 but only conceded 22 compared to United's 34.

Mourinho is not a one-trick pony.

When Manchester City announced that Pep Guardiola would be arriving this summer, it was a stunning coup as the world's most celebrated coach headed to Etihad Stadium. It was also a shot across Manchester United's bows.

In recruiting Mourinho, United are recreating a bitter, intense personal and footballing rivalry from their time together in La Liga with Real Madrid and Barcelona.

United's appointment of Mourinho can easily be seen as their response to City - a declaration that they are not prepared to stand aside and let them have things their own way.

The pair first met at Barcelona more than 20 years ago when Mourinho was on the staff and Guardiola a player. It is in the technical area where the real battle lay. They have met each other 16 times in opposition, Guardiola winning seven and Mourinho three.

Guardiola won the Champions League twice with Barcelona in 2009 and 2011. Mourinho interrupted that run with Inter Milan in 2010 - beating Barca in the semi-final - and also won with Porto in 2004.

Both men are fierce competitors but differing personalities. United will hope that Mourinho will challenge Guardiola's profile, prove they mean business once more - and most of all compete with the Catalan for trophies.

Spain goalkeeper De Gea is quite simply United's key player. The 25-year-old wins points and matches and his importance has become even more apparent since the breakdown of a move to Real Madrid last summer.

De Gea signed a new four-year contract last September but there is the lingering fear that Real may yet return to try again - Mourinho will know how hard his chances of success would be hit if he left.

He must make it his business to ensure De Gea is satisfied about his ambitions.

United won the FA Cup and somehow kept themselves in contention for the top four until the season's final weekend - a feat at odds with the quality of their performances.

Manchester City will move their aspirations on to a new level under Guardiola while Chelsea will expect to fight for honours again under Antonio Conte. Mourinho must lead United's response.

He will surely focus on rebooting United's central defence that, the inconsistent Chris Smalling apart, lacks class and quality.

Mourinho wanted to pay £40m for Everton's John Stones last summer but he may have to get into another battle with Guardiola to sign the talented 21-year-old.

He has been a long-time admirer of Real Madrid's elegant defender Raphael Varane, who he brought to the Bernabeu in 2011, and has also been linked with Juventus's Paul Pogba, who was sold by United four seasons ago before developing into a £70m-rated midfielder.

Will he go for a Hollywood signing and go for 34-year-old Zlatan Ibrahimovic, who he was close to at Inter Milan, or Borussia Dortmund's Pierre-Emerick Aubameyang, 26?

Mourinho will know United's squad needs urgent work - and has probably prepared for his arrival months in advance.

Easier said than done with competition increasing with the arrival of Guardiola and Conte, as well as Jurgen Klopp getting his feet further under the table at Liverpool.

Mauricio Pochettino will build on a fine season at Spurs while Arsenal manager Arsene Wenger will want to prove that, for once, his optimism is not misplaced.

There will be reservations about Mourinho at Manchester United but they have gone for the managerial default option when it comes to success. He is as close to a guarantee of trophies as it gets.

He will want to be challenging for the Premier League right away - that is what United will be demanding and they will provide the financial firepower to help him achieve the objective.

This feature is an update of one published on Monday, 23 May before Mourinho's appointment was confirmed.