AFC Wimbledon were promoted into the third tier for the first time in their history after beating Plymouth Argyle in the League Two play-off final.

Lyle Taylor turned in Callum Kennedy's cross for his 23rd goal of the season.

And substitute Adebayo Akinfenwa netted a penalty in the 11th minute of injury time after a foul on Adebayo Azeez.

The Dons achieved a sixth promotion since their formation in 2002 by fans of the old Wimbledon FC following their relocation to Milton Keynes.

Argyle, who topped the Championship back in August 2004, will remain in League Two for a sixth season, having almost gone bust in 2011.

Neither goalkeeper was troubled until after the break, when Argyle midfielder Graham Carey's free-kick forced an excellent diving save from goalkeeper Kelle Roos.

A game of few chances was lit up with Taylor's goal, as Wimbledon edged towards a deserved win in front of 57,956 fans.

As Argyle pushed forward the Dons had chances to seal the game, but Luke McCormick made excellent saves from Barry Fuller as he broke through, Akinfenwa's close-range header and from Taylor, who shot tamely when clean through.

Having seen semi-final hero Peter Hartley carried off on a stretcher in the closing moments after a clash with Akinfenwa, the Plymouth defender's replacement Jordon Forster fouled Azeez after he cut in from the left in the box.

That allowed Akinfenwa to step up and send McCormick the wrong way from the spot.

Phoenix from the ashes of MK move

Promotion for AFC Wimbledon keeps the remarkable story of the club's rise from the aftermath of Wimbledon's move to Milton Keynes going.

They have now won six promotions since they first took to the field in the Combined Counties League in the ninth tier of English football.

While the club still hope to return to their home borough of Merton, next season raises the tantalising prospect of two league fixtures with MK Dons, who were relegated from the Championship.

The clubs have played three times before in cup matches - all at Milton Keynes - with AFC Wimbledon getting the better of MK Dons once. 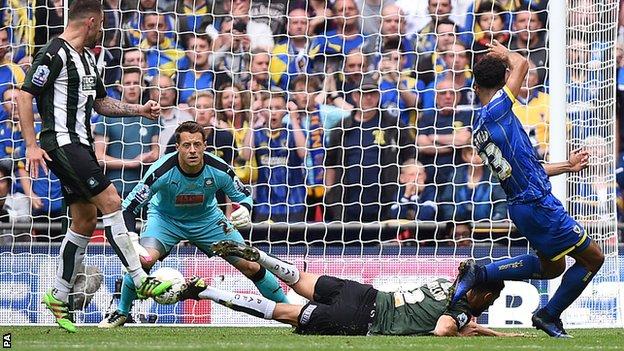 In a game short on memorable moments, Taylor's goal stood out as a piece of class, taking the ball well as it came across his body.

A thorn in Argyle's side throughout, he was an excellent foil to first Tom Elliott and then his replacement Akinfenwa up front.

He should have had a second late on when through on goal, but he will not mind his weak effort as he created a memory that will last a lifetime both for him and the fans of AFC Wimbledon.

AFC Wimbledon manager Neal Ardley: "It's surreal at the moment. It hasn't really sunk in.

"Once we got to Wembley, we prepared them to the letter about trying to win this game.

"To pull it off, to stand there in front of 25,000 people who 14 years ago had their club ripped away from them and have been through so much, to stand there as one of their own who's come through the ranks at the age of 11 - you can write anything you want, it doesn't get any better than that."

Plymouth manager Derek Adams: "We didn't perform well enough today, we weren't composed enough at times when we had possession.

"It's a huge disappointment, but we've come a long way. We've been working with a threadbare squad and it's a testament to the players to get here.

"We didn't pass the ball well enough and we didn't open up Wimbledon through the wide areas or down the middle.

"We've put a lot of pride back into Plymouth Argyle this season, and hopefully that can continue."