Northern Ireland are preparing for their first ever European Championship finals, where they will face Poland, Ukraine and world champions Germany in Group C.

Michael O'Neill, the man who led them to France, talks to BBC Sport about their expectations for the tournament, how they have prepared, and his hopes of creating a 1982 World Cup-style legacy.

The wait for Euro 2016 has dragged

I'm glad Euro 2016 is almost here. There has been a sense that it is never going to come and you're waiting and waiting.

It's a huge thing to be there. When we won our first three qualifying games people really began to think we can do this. Then you feel there is a lot to lose because you feel it is possible.

So to deliver qualification for the people of Northern Ireland was a huge achievement by the players. I'm delighted for the players who have had long careers and at times there have been difficult moments in those careers. Their loyalty alone has been rewarded by reaching Euro 2016.

My message to the players is this is an experience we all have to enjoy. We don't want to come away with regrets. I don't want the players burdened by expectation but they have to grasp this opportunity.

Leicester success can inspire us

It's amazing how football changes. In our third qualifier we beat Greece and Claudio Ranieri was the coach. He lost his job the following game. For him to come to the Premier League, at his stage of his career, and win it is an amazing achievement - the stuff of fairytales.

There are similarities between Leicester and Northern Ireland when you look at the route a lot of the Leicester players took to get to where they are. We have lads who are at Fleetwood Town [Vardy's previous club].

In terms of how we play there are similarities, too. Hopefully the neutrals will see a nice humility and work ethic about our team.

While we're realistic enough to think we're not going to win the tournament, hopefully we get that level of support where we get a huge groundswell of people willing us to do well, which takes us as far as we can go.

Started at the bottom - but this will be hard to top

O'Neill managed Scottish third tier side Brechin City from April 2006 until December 2008, when he became Shamrock Rovers boss. He led the Dublin club to two Irish titles and to the group stages of the Europa League.

He left Rovers for the Northern Ireland job in December 2011 and recently signed a new four-year deal.

I started my managerial career at the bottom. I had to go to a small club in Scotland who were part-time and I was working in financial services.

I had an opportunity to go over to Shamrock Rovers. People thought that was a bit of a strange move but I felt it was a good opportunity.

I didn't plan to be the national manager when it came around. I was 42 but I said to myself 'why not see where it takes me?'.

It's been a huge challenge. There were difficult times in the first two years but it taught me about perseverance. I probably underestimated the size of the job to progress things. But we have got where we are and it has been immensely rewarding for me.

It will be hard to top taking my country to a major finals whatever happens in my future career.

Order of our games suits us 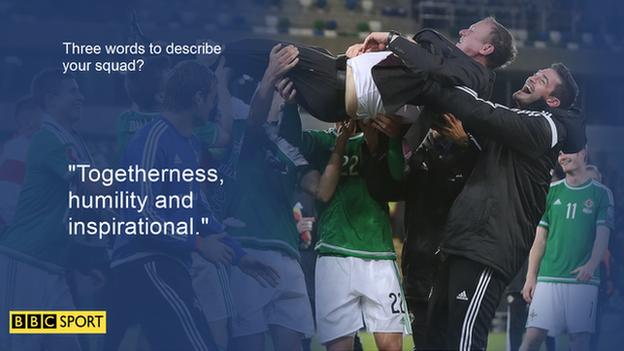 Northern Ireland open against Poland on 12 June, before playing Ukraine four days later and facing Germany on 21 June. With four third-placed teams going through to the last 16, one win might be enough.

The order of the fixtures is favourable to us. I'm glad we are playing Germany last because we could have been playing them earlier, had a really tough result and had to lift the players. At least we don't have to face that until the last group game.

Even if we draw the first game, we go into the second game almost like a cup final and know if we win this game we will probably qualify.

Poland is a tough game but when I look at qualification both Scotland and the Republic of Ireland drew with them. Robert Lewandowski is obviously a player that we are going to have to deal with but it is not beyond us to get a draw or a win.

Ukraine's strength is in their wide players - Andriy Yarmolenko and Yevhen Konoplyanka. They narrowly got past Slovenia [in Euro 2016 play-off], who we beat in March. I spoke to Chris Coleman about Ukraine because his Wales team were beaten 1-0 by them in March. He said they were tough and physical. We'll have to match that.

Germany had a bit of a hangover from the 2014 World Cup in qualification - losing to the Republic of Ireland and Poland. It will be a tough ask but when you go into a game like that you have everything to gain. Our aim is to have something to play for by the time we face them.

Between myself and one of my coaches who does the analysis, Austin MacPhee, we've watched the 10 qualification games of each of the countries in our group.

I've seen Germany live and we've had Poland and Ukraine watched live whenever the opportunity existed in the recent friendly matches. One of our biggest strengths is the knowledge we have of the opposition.

I went to Poland and Ukraine for Euro 2012 and I felt the atmosphere in the stadiums was fantastic.

I remember thinking it would be magical to come to something like this with Northern Ireland and now we're getting a chance to do it. It's going to be special.

It's been a huge few months. When you look at the scenes after the Greece game, it was euphoria. There's a generation of people in Northern Ireland who have never had the chance to see their country compete in a major tournament.

The excitement is tangible anywhere you go in Northern Ireland. It's hard not to feel it. Jumping in a taxi, the driver wants to talk about it. It's nice that we've created that.

Green shirt lifts some players above their club ability

A lot of people talk about the spirit and the work-rate of the squad. But there's quality within that. Some players when they pull on a green shirt are able to lift themselves above the level they play club football.

It's not just spirit and togetherness that gets you to Euro 2016. We won our qualifying group by being the top scorers. We are a big threat at set-pieces, which is a big part of the game. The template that got us to France will hopefully stand us in good stead.

We want to create our own legacy

The last time Northern Ireland qualified for a major tournament was the 1986 World Cup, but it was their campaign in 1982 which lives in fans' memories - beating hosts Spain on the way to the knockout stages.

I remember it vividly. I was 12, at home in Ballymena, watching on television. It was different then because there was not the amount of coverage on television as now.

So when the World Cup and European Championships came round it was huge. I remember Gerry Armstrong scoring, Mal Donaghy getting sent off and Pat Jennings playing amazingly well.

Northern Ireland were playing host nation Spain with 10 men and still won. It was just magical. That team achieved great things and that is the inspiration we will take for this tournament. We want to go to France and create our very own legacy.

Unfortunately [manager for both those World Cups] Billy Bingham's health is not good at the minute - he has dementia. But I received congratulations and well wishes through his son when we qualified.

[Golfer] Rory McIlroy has been in touch, so too boxer Carl Frampton, singer Gary Lightbody and actor Jimmy Nesbitt.

All the previous players have been very generous with their praise. Sammy McIlroy [who played for Northern Ireland in 1982 and 1986] was one of the first to call me up after we qualified. Hopefully our players can be talked about the same way as those players are talked about.