Zlatan Ibrahimovic could "plug the financial gap" of Manchester United's failure to reach the Champions League - should he join the club.

The Sweden striker, who is out of contract after four years at Paris St-Germain, could follow former manager Jose Mourinho to Old Trafford.

Football finance expert Rob Wilson says the 34-year-old would be United's most marketable player since Cristiano Ronaldo, and linking up with the three-time European champions would be a "match made in heaven".

Wilson says Ibrahimovic's shirt sales alone would help cover the cost of finishing fifth in the Premier League this season and missing out on the riches of playing in Europe's elite competition, worth up to £50m.

"It would not surprise me if Zlatan sold more shirts than Ronaldo or Lionel Messi," Wilson, a lecturer at Sheffield Hallam University, told BBC Sport.

"The cost of missing out on the Champions League is £30-50m. Zlatan will help plug that gap significantly with the number of shirts shifted by United.

"It is a match made in heaven. The football club is commercially so aware who will exploit every commercial opportunity.

"To them, they are signing a player who understands commercial endorsements and behaves in a way that allows him to maximise them.

"Put that together and you get the holy grail stakes of shirt sales, and stacks of corporate sponsorship.

"Zlatan is also the sort of player who brings ad hoc ticket buyers to a match, even if it is the Europa League or League Cup.

"It is matching the world's biggest sporting brands with one of the most marketable players, who has cult following, plus it is his career swansong.

"If you marry that with Manchester United, he will probably shift more shirts in the next year than any player in the squad because of the superstar status that he has."

Wilson claimed that Ibrahimovic could become the face of Manchester United.

"Zlatan has a global profile, and global appeal," he said. "Fans will buy shirts with Ibrahimovic on the back in Africa, South East Asia - markets United had a foothold in but not the leverage.

"Only a few select few players can do that: Gareth Bale, Neymar, Lionel Messi and Ronaldo."

If they are the off-pitch benefits of signing Ibrahimovic, what else will the enigmatic Swede bring to Old Trafford and the Premier League? 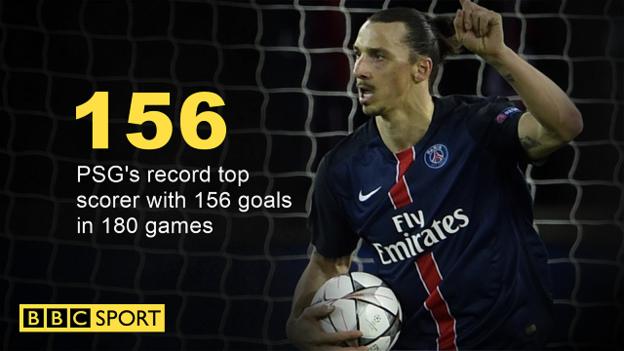 Since making his debut for his hometown club of Malmo in 1999, Ibrahimovic has played for some of Europe's biggest clubs: Ajax, Juventus, Inter Milan, Barcelona, AC Milan and PSG, commanding transfer fees of more than £120m.

Ibrahimovic does not do ordinary goals. He scored four against England in a friendly in 2012, including an amazing overhead kick and then there are the free-kicks, long-range goals, back-heels, flicks and scorpion goals. 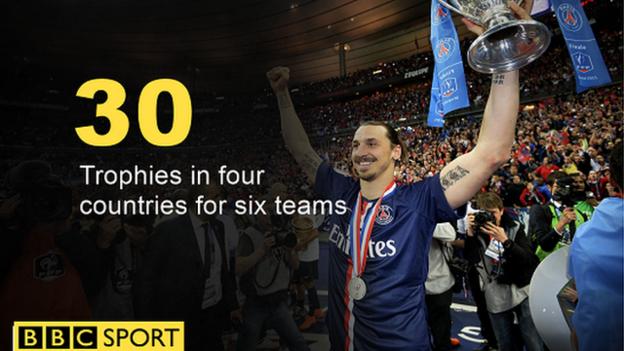 Manchester United's FA Cup victory on Saturday was their first trophy since the Premier League title in 2013, when Sir Alex Ferguson retired.

But Ibrahimovic is used to regular success and has won 12 trophies in four seasons at PSG, including the domestic quadruple twice.

While he may not have the same Ballon d'Or collection as Messi or Ronaldo, at least Ibrahimovic can console himself with being - beyond doubt - the best player in Sweden.

The striker has won a record 10 Guldbollen (Golden Ball), the award given to the best male footballer in his home country.

Ibrahimovic is one of the most quotable figures in world football. Here are just a few examples:

"He will play up to that image that people had of him," Franden told BBC Sport.

"When he says these things there is still a smile behind it, but for the last 15 years he has had so many people telling him how good he is that I think he does believe all of it."

His way with the media

Ibrahimovic has always enjoyed a spiky relationship with the media and his critics.

In 2015, after the semi-final of the French League Cup, he ordered his team-mates not to talk to journalists. When questioned why, he said: "Because I am the boss."

"Only God knows" was Ibrahimovic's answer when quizzed by a journalist about Sweden's chances against Portugal in the 2014 World Cup play-offs.

"Well, it's a bit hard to ask him", the reporter said, to which the player replied: "You're talking to him now."

On another occasion, he was forced to apologise for describing France in not so endearing terms.

"There will be a clash [with the media]," said Franden. "He will not hold back. He is not scared by the media; he will tell the journalists what he thinks.

"You expect if there is any discontent it will leak out.

"He can handle the pressure, but he keeps his private life private, he does not invite the press in and his partner Helena Seger will be in the limelight more than she has been so far."

His way with team-mates

Ibrahimovic could soon be linking up with England captain Wayne Rooney.

In a BBC documentary, he said of Rooney: "I'd prefer to have him in my team than play against him. I've not been lucky enough to play with him but I enjoy seeing him on the pitch. If I cannot play with him, I will watch him."

But it is fair to say Ibrahimovic has not always enjoyed the best relationship with team-mates and it is safer to stay on his good side.

He once put AC Milan team-mate Gennaro Gattuso in a bin after a training session, in retaliation for being teased by the Italian.

A fight with AC Milan team-mate and 6ft 5in American Oguchi Onyewu ended with a broken rib for Ibrahimovic, he once threatened to break Ajax team-mate Rafael van der Vaart's legs and another time he hit Mido after the Egyptian threw a pair of scissors at him.

Earlier this year, Ibrahimovic told his PSG team-mates at half-time to "play as I tell you and everything will be fine".

"It is a good time for him to go to United, as there is not such a clear leader in the squad," said Franden.

"If he goes to United it is because Mourinho has told him he will be the number one, the most important voice in the locker room.

"Zlatan wants to be the most important player on the pitch. He is not a leader in the way he talks, but he expects team-mates to listen to him especially when he is not happy. He is also extremely demanding of himself.

"He will be a good example to the young players in how disciplined he is and how hard he works. He is always early for training and one of the last to leave. He eats healthy and does not drink or smoke."

Former United assistant manager Rene Meulensteen told BBC Radio 5 live: "In some ways Ibrahimovic is the perfect fit for Manchester United at this moment in time. They have young players in the dressing room and he is a leader, a winner.

Ibrahimovic is joining United to link back up with Mourinho, who coached him at Inter Milan for a season from 2008-09.

"From being a cat, I felt like a lion," was how Ibrahimovic described the impact of Mourinho in an interview with Radio 5 live.

"He was amazing. He dragged out of me things that no other coach has done before. When I played I felt like a Terminator, I felt so confident under him."

In his book I Am Zlatan Ibrahimovic, he described Mourinho as a manager he was "willing to die for".

"The first time he met my partner Helena, he whispered to her: 'Helena, you have only one mission: feed Zlatan, let him sleep, keep him happy'."

"Mourinho knows what he is bringing. Zlatan has always wanted to work with him again," said Franden.

"He had been very eager and was disappointed Mourinho had not got him in before.

"He said at Inter that Mourinho was the best he had worked with and was disappointed Mourinho has, until now, not picked up the phone to ask him to come. Mourinho has always praised Zlatan.

"When Zlatan left Inter some players said they were two seconds away from getting physical with each other. There was not enough air to breathe but Zlatan is willing to work with him. They are two big egos and they do clash."

"If Mourinho lights up a room, Guardiola draws the curtains," wrote Ibahimovic about former Barcelona boss Pep Guardiola, who takes over at Manchester City next season.

He referred to the Spaniard as a "spineless coward" in his autobiography, and Barcelona president Josep Maria Bartomeu revealed Ibrahimovic said he "might punch Pep" during his time at Barcelona.

Barcelona bought Ibrahimovic for £57m and he scored 21 goals in 51 matches, but he felt he was used incorrectly by Guardiola and once confronted him on the training ground over lack of playing time.

"I said I was being used in the wrong way and that they shouldn't have bought me if they wanted another type of player," he wrote about a meeting with Guardiola.

"I told him what a friend had said to me: 'You bought a Ferrari but drive it like a Fiat.'"

Expect fireworks at the Manchester derby next season.

'Born to play at United'

"We had Cantona in the mid-90s. A lot of what happened in the 1990s would not have happened without him. Now it is time to have someone like that again. Zlatan fits that bill.

"In the last five years Zlatan has only improved his fitness, his abilities and output . His stats are unbelievable. Not just say in the French league, because he does it in Europe and for Sweden. He finds the goals, he finds the tricks, he finds what the crowd needs. I said this before, he was born to play for United."

Ex-United midfielder Paul Scholes added: "Zlatan joining United does excite me. I know it might only be one or two years at the most, but he is a fit lad, looks after himself and is a great character, he could pull it off without a shadow of a doubt."

Will Maxwell join him?

Brazil left-back Maxwell and Ibrahimovic first met at Ajax in 2001 and have followed each other to Inter Milan, Barcelona and Paris St-Germain. They are close friends.

The pair have won 10 league titles together, so could we see Maxwell join his friend across the English Channel?

And of course the big question...