France midfielder Lassana Diarra has been ordered to pay a fine of 10m euros (£7.6m) to his former club Lokomotiv Moscow.

The Court of Arbitration for Sport ruled that the 31-year-old had breached his contract when leaving the Russian club in 2014.

Diarra, now with Marseille, left Lokomotiv after having his salary cut.

"I will accept the situation as I have always done," said the former Chelsea, Arsenal and Portsmouth player.

Diarra, who won the FA Cup in 2007 with Chelsea and then with Portsmouth a year later, was named in France's final 23-man squad for Euro 2016 on Saturday. 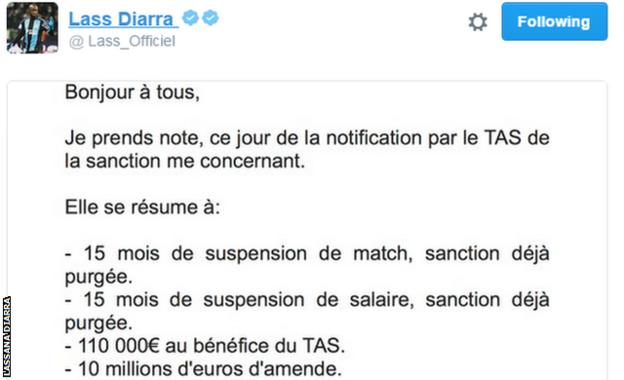 Having left Lokomotiv after a year with the club, Diarra was banned for 15 months before signing for Marseille in the summer of 2015.