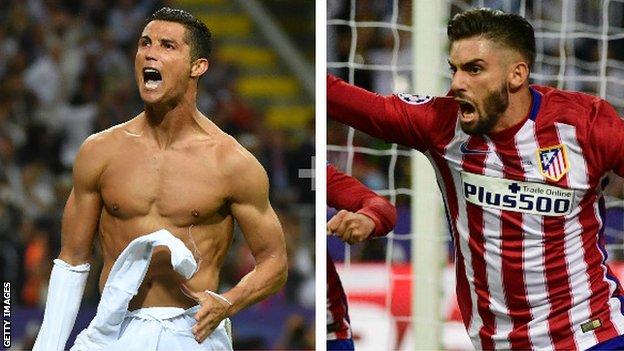 But how did the Portugal winger fare over 120 minutes in the San Siro? Which substitute made a big impact for Atletico? And who was "embarrassing" for Real?

Did not put a foot wrong. Antoine Griezmann has missed two of his four penalty kicks this season, both against Navas.

He was not bad in the first-half, but did not do anything special.

Absolutely immense, did not give the Atletico attacking line an inch. Ramos is the first defender to score in two different Champions League finals.

A solid display but his antics were embarrassing. Ramos was the only defender to make more clearances - with eight - than Pepe's six.

A good threat throughout the game. Marcelo made 35 passes in the opposition half; only Luka Modric made more with 44.

He was the big reason Real won the final. Casemiro made the most tackles in the final, with eight.

Cool and calm as always and grew in influence as the game went on. Modric played seven key passes, more than any other player.

Not in his favourite position where he likes to control the game, but did not put a foot wrong.

Immense, he always looked a threat and was unlucky not to get on the scoresheet.

Did not have an impact on the game, some nice touches but was lacking sharpness.

Did not do much throughout the game but ended up scoring the winning penalty for his third Champions League title.

Provided a lot of energy, especially in extra time, but was erratic at times. No Real player made more interceptions than Danilo with five.

At fault for Atletico's goal - when he fell asleep while marking - and had a good opportunity to score the winner but took a touch when he should have hit it first time. He stepped up and took the first penalty and put it away.

He made some massive saves in the game and kept Atletico in it, especially with his two stops to deny Ronaldo. But you might question his penalty shootout technique. Oblak made six saves during the match, but failed to save any of Real's five penalties.

He was fantastic through the whole game and provided the assist, so it was unfortunate that he missed his penalty. Juanfran became the first defender to assist in two different Champions League finals.

Strong as ever. Godin made six clearances, the most for Atletico.

He had quite a good game and was not caught out. Savic made five blocks during the game; three more than any other player.

He struggled with Bale in the first half but was much better in the second half and more of an attacking influence.

He was very good, even though he was not as attacking as usual. Koke was one of two players to attempt more than 100 passes (107).

Did not do much in the first half and was hauled off at the break.

Did some nice stuff but struggled a little at times.

He tried to make things happen in the first half and was a lot better in the second half but was always trying to get back into the game after his penalty miss.

Worked hard, but that is not enough for a striker. Feel if Atletico had somebody of real quality, a real powerful centre-forward, then they would have won the game.

Not much time to make an impact.

Not much time to make an impact.

He was phenomenal, the most influential player from an attacking aspect. The first Belgian player to score in a European Cup final.

Man of the match - Sergio Ramos