Most of Europe's top players are now gearing up for the start of Euro 2016 after being named in their country's 23-man squad for the tournament.

Injury has prevented the likes of Belgium's Vincent Kompany, France's Raphael Varane and Germany's Marco Reus from being involved.

But other top names have been deemed surplus to requirements for the competition in France, which starts on 10 June.

BBC Sport has put together a starting XI (plus substitutes) of players omitted by their country this summer.

The 25-year-old goalkeeper has had a superb first season with Paris St-Germain, keeping 25 clean sheets in all competitions to help them win an unprecedented domestic treble (including the Ligue 1 title by 31 points). However, this was not enough to force his way into the Germany squad, with Joachim Low opting for Manuel Neuer (Bayern Munich), Bernd Leno (Bayer Leverkusen) and Marc-Andre ter Stegen (Barcelona) as his three keepers.

After an inconsistent start to his Liverpool career, the 26-year-old has now established himself in Jurgen Klopp's starting XI. Unfortunately for the central defender, his relationship with Croatia head coach Ante Cacic is not as strong. The pair fell out during a friendly in March, when Lovren was an unused substitute, before he reportedly sought guarantees he would start games. "When it dawns on him that he can't look down on his team-mates, the staff and the coach, he will perhaps find a way to get back in," said Cacic.

The former Arsenal and Fulham defender has 55 international caps but will not be adding to those this summer. The 31-year-old is now back playing in Switzerland with Grasshoppers Zurich, after leaving Aston Villa in January, but has clearly not impressed sufficiently enough over 14 appearances to warrant a trip to France. "It's a difficult moment for him," said coach Vladimir Petkovic. "He has maybe lost a bit of confidence and that positive feeling is not there."

The defensive midfielder/defender has had his share of injury problems but he remains a high-profile absentee. The 27-year-old made 27 appearances for Bayern Munich this season as the German side won a domestic double and reached the semi-finals of the Champions League. But this was not enough to give him the chance to add to the World Cup and European Championship winners medals he won in 2010 and 2012 respectively.

The 26-year-old defensive midfielder's omission prompted some anger from fans on social media. Drinkwater played a key role in Leicester's Premier League title-winning success this season and was named man of the match on his international debut in the 2-1 friendly defeat against the Netherlands in March. But with Eric Dier likely to start and Jordan Henderson and Jack Wilshere fit again, Roy Hodgson clearly feels he has enough midfield options.

Ben Arfa has resurrected his career at Nice this season after it went off the rails at Newcastle and Hull. The attacking midfielder scored 18 goals in 36 appearances, prompting his return to the international scene for the 2-0 friendly loss to England last November. "Hatem has had a great season but he's not the only one in that position," said France coach Didier Deschamps, who also has Antoine Griezmann, Anthony Martial and Dimitri Payet at his disposal.

Marco Reus' absence from the Germany squad drew the headlines, but Bellarabi is also a surprising omission. The 26-year-old Bayer Leverkusen midfielder has had a superb season, which he ended in style, scoring seven times in his final 16 appearances to help his club to a third-place Bundesliga finish. However, this was not enough to force his way past the likes of Julian Draxler and Andre Schurrle and into Joachim Low's squad.

Such is the abundance of quality available to Spain coach Vicente del Bosque, he is able to leave out a player who has just helped Real Madrid win their 11th European title. The 24-year-old midfielder appeared regularly for his country during qualifying for France and made 43 appearances for Real this season but lost out as Del Bosque opted for Atletico Madrid's Koke and Isco's club-mate Lucas Vazquez instead.

Three goals in 23 appearances in his second loan spell at AC Milan was never likely to be enough to earn Mario Balotelli a spot in the Italy squad. The forward was one of the stars of Euro 2012, scoring three goals to help Italy reach the final, but his career has stalled since then. The 25-year-old now has a summer to reflect on whether he can salvage his club career with Liverpool.

If the tournament had been played last summer, Costa would surely have made the cut, but the forward's second season with Chelsea has been far more inconsistent than his first. He actually ended the campaign in decent form, scoring 12 of his 16 goals in his last 20 appearances, but after just one strike for his country in qualifying and doubts over his fitness, coach Del Bosque clearly feels he has better options.

The 28-year-old striker has suffered for matters off the pitch rather than on it. His record of 28 goals in 36 games this season for Real Madrid is enough to warrant inclusion in the France squad. However, he has been excluded following his implication in an alleged attempt by one of his friends to blackmail international team-mate Mathieu Valbuena over a sex tape. Arsenal's Olivier Giroud is likely to lead the French line in his absence. 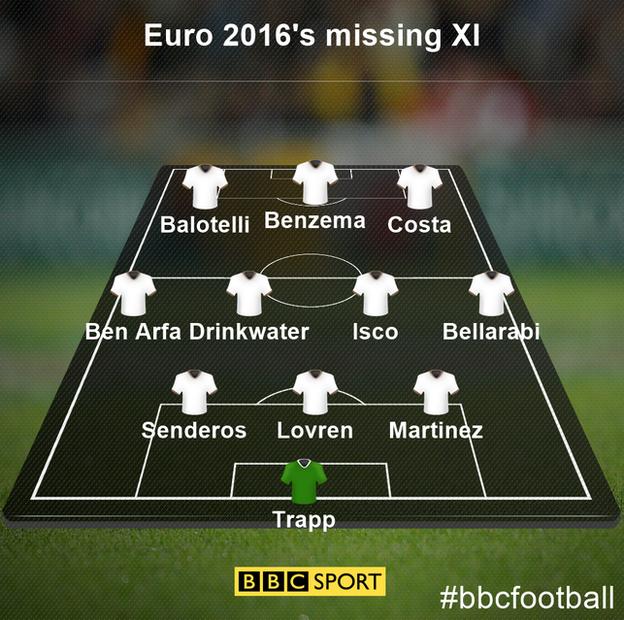