Owen, 36, who scored 40 goals for England, said the 22-year-old had been unfairly criticised because he likes to play out of defence rather than hack it clear.

"The problem is that because he's so much better than most other players no-one can relate to how he's thinking," Owen says.

So is Owen right to put Stones on such an elite pedestal? Do statistics back up the former England striker's view?

Another ex-England international, defender Sol Campbell, recently stated that Stones makes too many mistakes to be considered for the England starting XI at Euro 2016.

BBC Sport team selector users are also decided - centre-backs Chris Smalling (825,000 selections) and Gary Cahill (789,000 selections) start in the majority of the 1m teams, with Stones the 12th most popular player with 384,000 picks.

Back in March, a slip by the young defender eventually led to a Netherlands penalty in the 2-1 win over England, and in January a risky backpass to keeper Tim Howard resulted in Everton conceding a penalty to Swansea.

In fact, according to Opta's statistics, both Stones and his fellow Toffees centre-back Phil Jagielka made the most errors directly leading to goals in the last Premier League season - three. Only Southampton's Maya Yoshida and West Ham's Aaron Cresswell made as many.

Stones' rivals for the England centre-half spot, Manchester United's Smalling and Chelsea's Cahill, made no such errors.

"He will make the odd mistake but so will everyone - everyone just goes on and on and on about mistakes," Owen says.

So is Stones a liability? Not according to these statistics.

The Barnsley-born player conceded only 11 fouls in the Premier League last season, giving away a free-kick only once every 2.8 games.

That is a better rate than Smalling and Cahill, and many of his other Premier League and European counterparts. 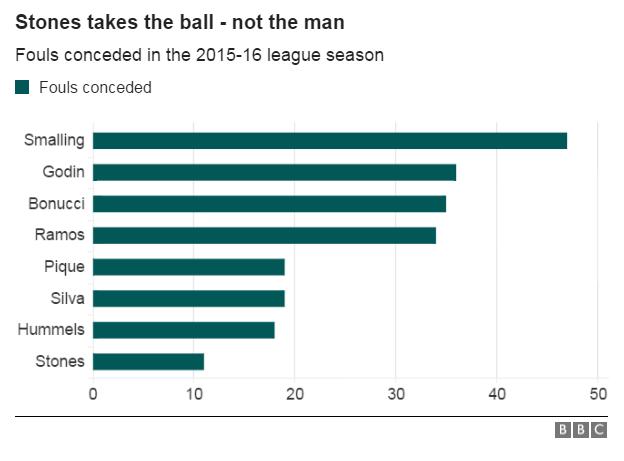 But could he play for Barca?

Both Pique, 29, and Javier Mascherano, 31, have been rocks in the Barca backline this season. Only Atletico Madrid conceded fewer goals (18) than the Catalan side's 29 in La Liga last season.

But the graphic below suggests the 22-year-old Everton defender would not be such a bad fit for Luis Enrique's La Liga champions after all. 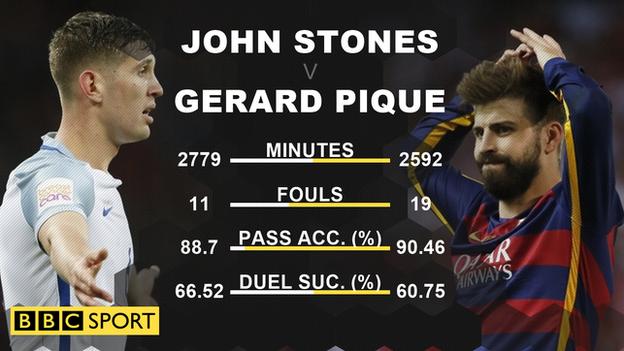 How does he compare to Europe's elite?

If you widen the comparison to include the best on the continent, then again he fares well.

Aside from conceding fewest fouls, his pass completion rate in the third best and he has a high rate of success in one-on-one situations.

View of the journalist

"Stones received heavy criticism during a tough season at Everton - but there is no doubt there is a truly outstanding defender waiting to re-emerge.

"He suffered from playing under Roberto Martinez's management in an Everton side where good defending was almost regarded as optional, allied to a dip in form that often afflicts younger players.

"Stones was also arguably a victim of Martinez's indulgence, where he was almost actively encouraged to stick rigidly to his natural ball-playing style at any cost rather than adopt a more risk-averse approach. This led to nervousness, not just in Stones but Everton's supporters, and consequently mistakes.

"In stronger coaching hands, at least defensively and with greater emphasis on positioning, there is every chance the defender perfectly suited to all aspects of the modern game - one with pace, vision, aerial ability and timing in the tackle - will be back.

"Whether this will eventually all add up to a defender good enough to grace Barcelona is another matter. Stones still has much developing to do before he can keep that elite company, but there is no question the potential is there in a talent that was allowed to fall into disrepair at Goodison Park last season."