England's warm-up matches before Euro 2016 are complete - but manager Roy Hodgson was left with as many questions as answers after a narrow win over Portugal at Wembley.

Hodgson's full strategy will only be revealed when he names his line-up for the opening fixture against Russia in Marseille on 11 June and he will be pleased England's players emerged unscathed from their final warm-up game on Thursday.

There was no clear evidence, however, that Hodgson has yet put a winning game plan in place.

So what are the key questions Hodgson must answer as he puts the finishing touches to his game plans for Euro 2016?

Wayne Rooney's presence in England's team has been a constant narrative for the past two years - and his role in the side at Wembley seemed to cause their main weapons to be disarmed.

Rooney was being used as the central figure, albeit lying deep, in an attacking triumvirate with Harry Kane and Jamie Vardy.

Kane and Vardy scored 49 Premier League goals between them for Tottenham and champions Leicester City but it is hard to see how they could have a serious impact on Euro 2016 employed as they were against Portugal.

Once again Rooney is central to the debate, still a figure of such influence and one Hodgson is determined to shoehorn into his England team

Rooney appeared to be deputed at the tip of a diamond when the teamsheet dropped but as he drove through the middle, Vardy and Kane were pushed wider and wider to the point where they could have taken a seat in the stands.

If they line up together in France, England's opponents will be delighted to see them occupying positions where much of their threat is nullified and their presence marginalised. They are not wingers, never will be and Hodgson is wasting them in those roles.

Vardy made eight passes and did not have a serious threat on goal, but it was the system rather than the player himself who was to blame. Kane's only reward for his unfamiliar wide role was when he was almost decapitated by the challenge for which Bruno Alves was sent off. 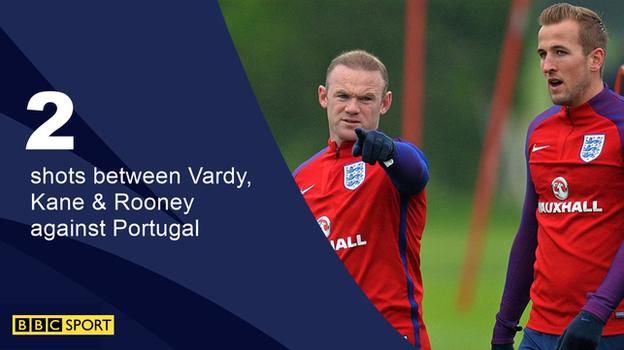 Kane and Vardy have proved they can adapt to international football in their short careers and Hodgson will be squandering a big opportunity if he does not play them closer together and more centrally located. They were strangers at Wembley.

As for the idea of Kane, England's main striker, taking corners and free-kicks out wide, it is to be hoped that is put in the dustbin reserved for flawed experiments.

And what about Dele Alli? The 20-year-old Tottenham player was shifted to the left of midfield to ensure Rooney was accommodated centrally and, like Kane and Vardy, had all his best attributes removed by a role unsuited to his talents.

Alli was outstanding playing a progressive central role when England beat world champions Germany in the recent friendly in Berlin, but he disappeared down the same hole as Kane and Vardy at Wembley, where England struggled to beat 10-man Portugal, who had Alves dismissed after 35 minutes and were without the rested Cristiano Ronaldo.

Hodgson has fine attacking players at his disposal. He must now find the system, unless this was merely late experimentation, to suit them.

There is of course, another option, which would be to drop Vardy, play Rooney as a striker alongside Kane and restore Alli to the number 10 role - but that would be harsh on a striker flying high on confidence.

Once again, Rooney is central to the debate - still a figure of such influence and one Hodgson is determined to shoehorn into his England team.

Will England's defence hold up?

There was not much to test England's unconvincing defence here, but there were still one or two anxious moments from set-pieces against a Portugal side devoid of ambition without their superstar, Ronaldo, and operating at a numerical disadvantage for 55 minutes.

Kyle Walker's man-of-the-match performance pushed his claims for a starting place ahead of Nathaniel Clyne for England's Euro 2016 opener against Russia, while the selection of goalscorer Chris Smalling and Gary Cahill in the centre of defence and Danny Rose at left-back suggests they will be the preferred options in Marseille.

If Hodgson persists with Kane, Vardy and Rooney, it will be up to Walker and Rose to provide most, if not all, of the natural width. It is a role they can fulfil but the serious test will come when they are pressed defensively.

It will apply to all of England's back four and there remains an air of vulnerability that may well be exposed against elite opposition in France.

Are England in good shape?

It is worth placing this game in context. England were playing their final game before a major tournament, against a side above them in the Fifa rankings. This was never going to be a no-holds-barred physical encounter as there was too much at risk for both sides.

Hodgson has shown ambition with his attacking selections and the inclusion of 18-year-old Manchester United prodigy Marcus Rashford in the squad, but he now has to find a system that does not put square pegs into round holes, as this selection appeared to do.

England have options in the forward positions - Liverpool's Daniel Sturridge is also available - and the defence looks to be picking itself, however unpalatable the selection in that area might be.

Hodgson will hope that defence exceeds low expectations and he can then devise a formula to utilise England's strongest assets.

There remains plenty of work to do behind closed doors at England's training base in Chantilly after they arrive in France.