Slight of frame, devoid of searing pace or show-stopping skills.

His speed lies in the mind, drifting into pockets of space to exhibit the art of a footballing metronome, an unerring passing machine and heartbeat of the Northern Ireland team.

"Steven probably gets 15 seconds a season on Match of the Day. He's been as good as any midfielder in the Premier League this season," said Northern Ireland boss Michael O'Neill.

Davis has hit a career pinnacle at the grand old age of 31, adding goals to his repertoire.

He scored two for the Saints in defeating title-chasing Spurs last month and hit another double against Greece to clinch qualification for Euro 2016.

Not a demonstrative captain of high emotion and bellowed commands - his calm authority has guided Northern Ireland to a first major tournament in 30 years.

Davis developed his fledging talent on the fields of Cullybackey, a small village near Ballymena in County Antrim.

This is 'Bible Belt' territory, rooted in traditional values with a rich, rural accent flowing from a close-knit community of 2,000.

I travel to Cullybackey and meet up with Leonard Wiseman in a Main Street cafe, run by his two daughters.

Leonard formed the Cullybackey Blues football club back in 1972 and coached hundreds of boys in its youth teams.

And over a coffee he recalls a little ginger-haired lad coming along to training.

"He was about eight at the time - there wasn't much to him physically but he was head and shoulders above the rest in terms of ability," said Leonard. 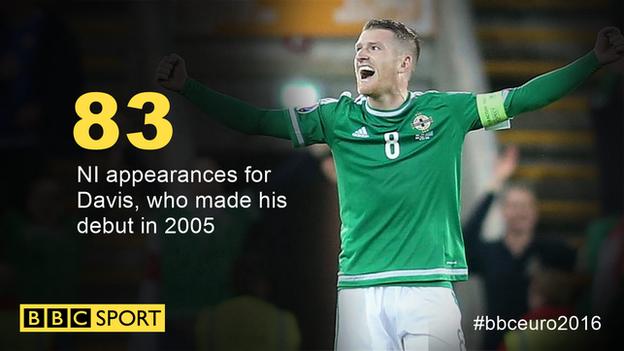 "It was a combination of things. His ball control, passing, movement and mannerisms set him apart.

"He was quiet but determined and I knew from early on that he had what it took to be a professional.

"It's just fantastic to see the progress of that wee boy through to playing in the Premier League and becoming Northern Ireland's captain.

"Everyone in Cullybackey is so proud of him and there's a real buzz in the village for the tournament in France."

Leonard brought two footballs with him, both signed by Davis.

One for a local raffle with the other destined for Buick Memorial, the village primary school and alma mater of Davis.

Leonard is chairman of Buick's board of governors and we make a short trip to deliver the special ball to the school.

An elegant 1930s facade, with a large clock its centre-piece, gives way to a modern interior and Leonard speaks proudly of the school's expansion and vitality as we walk the corridors.

This is the epicentre of the Euro 2016 excitement in Cullybackey and special events include pupils creating a mosaic of Davis from ice-cream toppings.

Davis is the ultimate role model for football-mad boys at Buick and Jonny Douglas and Peter Martin aim to emulate the famous former pupil.

Jonny wants his beloved Manchester United to sign Davis, although this is partly because "our midfield is rubbish".

Peter quickly interjects: "It's Northern Ireland's first time in a big competition for ages and he's captain - you can't beat that.

"He's brilliant and he went to our school."

The affection is mutual, for Peter was among the boys in the Buick football team to receive a letter of congratulation from Davis after a tournament success earlier this year.

"He was a fantastic wee fella," according to Marlinda Orr, who taught a young Davis at Buick.

"Pleasant and intelligent but also very grounded, modest despite his sports talent and from a supportive family. He keeps in touch and comes in to present awards, which is typical of Steven as he doesn't forget his roots."

Success for Davis is success for Cullybackey - an ambassador for a small community which revels in a strong connection with its most famous son.

"He's one of us, Cullybackey through and through," added Leonard.

"He's done so much for our village and I'm confident he will represent Cullybackey and Northern Ireland with distinction when it all starts on Sunday."