Everton have agreed a deal with Premier League rivals Southampton that paves the way for Ronald Koeman to become their new manager.

The Toffees will pay about £5m compensation for the 53-year-old Dutchman, who leaves Saints after two years in charge.

Everton have been without a manager since they sacked Roberto Martinez just before the end of the 2015-16 season.

It is expected Koeman's appointment will be confirmed by Friday.

Koeman, who has been headhunted by new Everton owner Farhad Moshiri, will sign a deal reported to be worth about £6m a year.

The former Netherlands international, who is on holiday, will take brother Erwin and fitness coach Jan Kluitenberg with him to Goodison Park.

Saints have finished seventh and sixth under Koeman - their best Premier League campaigns.

Martinez promised Champions League qualification when appointed but Everton finished 11th in 2015-16, his third year at the club. 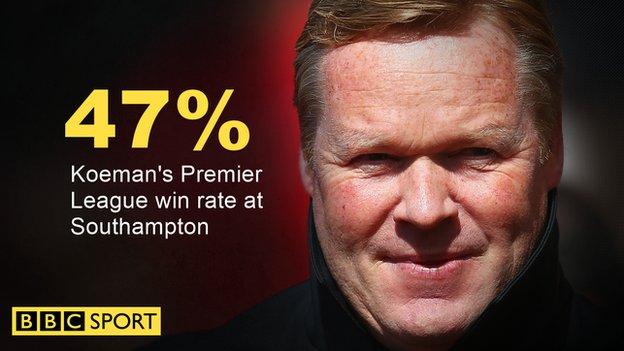 In April, Saints chairman Ralph Krueger said discussions with Koeman over a new deal were progressing "in a very good direction", but added the club was "not in any real hurry".

And last month the former Ajax, PSV Eindhoven and Barcelona defender said he expected to stay with the Saints for the final year of his contract.

Koeman made more than 763 appearances as a player, scoring 253 goals, and won the 1988 European Championship with the Netherlands.

He won the European Cup - now the Champions League - with PSV Eindhoven in 1988 and Barcelona in 1992, scoring the winner for the latter against Sampdoria at Wembley.

He also won four domestic league titles apiece in the Netherlands and Spain.

He has won the Dutch league with both Ajax and PSV.

Former Southampton and England forward Matt le Tissier said he was "disappointed" and "quite surprised" at Koeman's decision to leave, particularly with Saints playing in the Europa League next season.

"He may feel he has got a better chance of winning trophies at Everton. I'd be of a slightly different opinion," Le Tissier told BBC Sport. "I understand they've got a new owner and want to splash a bit of cash, but it might not be as easy a job as he thinks.

"Most clubs in the Premier League are pretty wealthy now and can compete in the transfer market. We just have to move on and look to the next man to take us forward again.

"The players' loyalty lies with the football club and hopefully they will kick us on again next season."