Emanuele Giaccherini and Graziano Pelle scored as Italy began their Euro 2016 campaign with victory over much-fancied Belgium in Lyon.

Southampton's Pelle sealed the win in injury time with an emphatic volley following an incisive break.

Belgium were very disappointing, with Romelu Lukaku and Divock Origi wasteful in front of goal.

Everton forward Lukaku curled over from the edge of the box with just the keeper to beat while Liverpool's Origi missed two opportunities to head his side level.

A triumph of team over individuals

Before the tournament began some pundits condemned this Italy squad for a lack of quality, and even coach Antonio Conte said: "It isn't a good time for our football."

The soon-to-be-Chelsea boss added: "It's important the squad has a good spirit. I work a lot at this."

On the evidence of this game, that is not the only thing he has worked at.

Italy's triumph was a result of superior organisation and discipline against 11 Belgian individuals who appear to possess, on paper at least, the greater talent.

Both sides now face games against the Republic of Ireland and Sweden, who drew 1-1 in the Group E opener earlier on Monday.

With 16 of 24 teams progressing from the group stage, Italy took a huge step towards advancing with victory against their likeliest challengers.

Italy have won this competition once, in 1968, and finished runners-up twice - most recently in 2012, when they were demolished 4-0 by Spain in the final.

While the current Azzurri side went unbeaten through qualifying, winning seven of their 10 matches, they compare unfavourably with the side of four years ago, lacking the calm, creative brilliance of Andrea Pirlo in midfield and an attacking spearhead to adequately replace a faded Mario Balotelli.

What they do have is a meticulous and tactically astute coach in the Chelsea-bound Conte and a stubborn Juventus-centric defence.

Such a foundation allowed them to limit and frustrate Belgium, leaving them vulnerable to one piece of ruthless counter-attacking brilliance - which Bonucci's 50-yard, defence-splitting pass and Giaccherini's cool finish provided.

The second half would have been more comfortable for Italy had a second goal been scored from an unmarked position by Pelle, who also had a second header saved by Thibaut Courtois after the break.

Despite only having qualified for one major tournament in the past 14 years, Belgium came to France as Europe's top-ranked side and one of the favourites to triumph in Paris on 10 July.

Their status is built around the attacking potential and club-forged reputation of individuals such as Kevin de Bruyne, Eden Hazard and Lukaku, as opposed to consistent evidence of a cohesive international team.

However, the Red Devils did little to suggest they are ready to convert this promise into something concrete on the big stage.

They were pedestrian in the first half, failing to get in behind the Italian backline, with De Bruyne particularly isolated.

They upped the speed after the break but still struggled to test Gianluigi Buffon, with Lukaku curling over a good chance and substitute Origi spurning two glorious headed opportunities.

Equally as worrying for Belgium was the performance of their defence.

Already without the injured Vincent Kompany, they looked particularly vulnerable with Jan Vertonghen deployed at left-back instead of alongside his Tottenham colleague Toby Alderweireld in the centre.

Italy coach Antonio Conte: "What we demonstrated tonight is that there were two teams who played exciting football, with changes at both ends. It proves that nothing is already written in football, and it is on the field where you have to make your point.

"In a tournament like this, you need an alchemy, of people who get on well together and the biggest satisfaction for me tonight is to see how happy they all were, also those on the bench. There's a very good spirit in this squad."

Belgium goalkeeper Thibaut Courtois: "Now we have to win the other two matches and be a better team. Italy outclassed us in organisation, and tactically they were the best team."

BBC pundit and former Italy striker Gianluca Vialli: "I don't want to brag, but we were almost perfect. We dominated the game, we showed desire and commitment and we played like a team. We had a perfect game plan."

BBC pundit and ex-England defender Rio Ferdinand: "That was a perfect example of one playing like a team, the other like a group of individuals. What was so impressive is the way they can go from defence to attack so quickly." 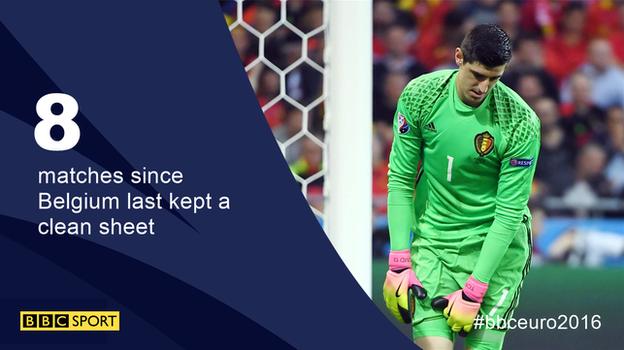 Italy face Sweden in Toulouse at 14:00 BST on Friday with Belgium taking on the Republic of Ireland in Bordeaux at 14:00 the following day.