England have never won their opening game at a European Championship but there is an extra incentive for them to finally put that right against Russia on Saturday.

When only the top two went through from each group, you could generally expect to meet another good team as soon as you reached the knockout stage.

But the expansion of the tournament for Euro 2016 means that this time, if we can win our group, we will play the third-placed team from Group A, C or D in the last 16.

They will almost certainly be weaker, giving us a much easier route to the quarter-finals - something which I think is a must for Roy Hodgson's team.

We have to get that far, otherwise, with the players we have and the format of these finals, we will have failed.

So, a positive start against Russia is imperative.

Why Roy will ditch the diamond

In our final warm-up game, against Portugal, the diamond failed. There is no hiding from that.

It did not work because most of the midfield was too deep and defensive and the forwards ended up like wingers, dealing with the opposition full-backs, when they should have been picked up by the wide midfielders or our own full-backs, higher up the pitch.

A few weeks ago I thought the diamond was probably the best way to get Wayne Rooney, Jamie Vardy and Harry Kane in the same team. Now, I will be amazed if that happens.

I played under Hodgson and his assistant Ray Lewington for three years at Fulham and, knowing them like I do, they will choose a system that their players feel comfortable in. That is the most important thing.

They will have had a good look at what went wrong with the diamond and will either revert to the 4-3-3 shape they used in March's win over Germany or the 4-2-3-1 that everyone will be familiar with.

Personally I would go with a 4-2-3-1 but I think Roy will use 4-3-3. Unfortunately, that means he will have to leave out Vardy. 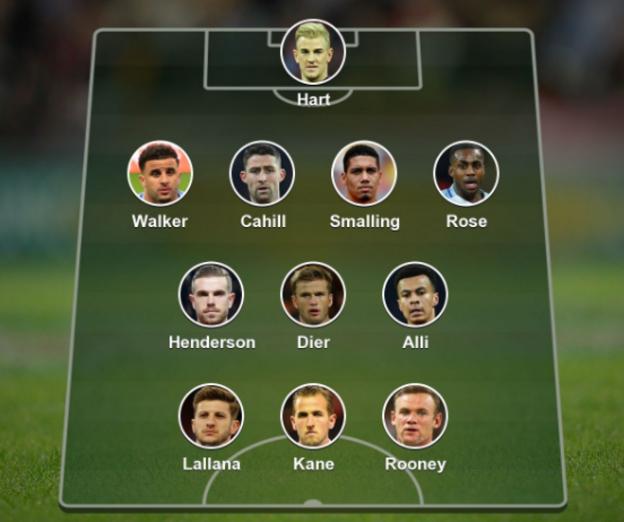 I don't think playing strikers out wide works just to get them in the team because they look so unnatural doing it.

Rooney is different when it comes to taking one of the wider roles because he has done it before and would not operate as a winger.

He would sit narrower. That way he can support Kane and also drop deeper as Dele Alli flies forward.

What we need to see from England

Whatever the formation and selection, what I want to see from England in Marseille is a high-intensity performance, with us on the front foot, pressing Russia and trying to make things happen.

We can do that in a controlled fashion so we do not have to be gung-ho.

But it will be up to us to take the game to Russia because they will definitely have a more cautious approach.

We should beat them with the extra quality we have in attacking areas but we certainly will not just roll them over.

Their defensive record in qualifying once Leonid Slutsky took over was pretty impressive, conceding only one goal in four matches.

I am not expecting a great game on Saturday, if I am honest, but I would expect us to dominate the ball and have a good go at them.

Russia will be dangerous too, of course. Artem Dzyuba is a powerful centre-forward and there are plenty of players with good technical ability in their side, even without injured playmaker Alan Dzagoev.

There is concern about how England will cope at the back against Russia - and everyone else - because we have looked so vulnerable at times in our warm-up games.

But the fact we are not perfect defensively does not worry me too much because we have the firepower to cause opposition teams a lot of problems.

Why Wilshere will be key - when he is fit

If I have any doubts about England it is actually about the creative aspect of our team in midfield.

From my perspective as a former midfielder, we played it too safe in the games against Turkey, Australia and Portugal and just looked to keep possession. We have some steady, solid players but they have to be braver on the ball.

Dele Alli gives us that higher up the pitch when he looks to slide in Harry Kane - but, in the middle of the pitch against a tight defence like Russia's, who is going to find a pass to unlock the opposition?

The only player we have who can really do that from deeper positions is Jack Wilshere. If he is fit, he will start.

Eric Dier has become an important player in that holding role because he is in such good form and Wilshere is not 100%.

But in an ideal world, Wilshere would be sitting in there dictating play. He is not quite as defence-minded as Dier but, as a ball player, he is superb.

It might be a case of easing him into this tournament but, when he is fully fit, he will be the key to giving us that balance we need in midfield because he sees the passes that no-one else does.