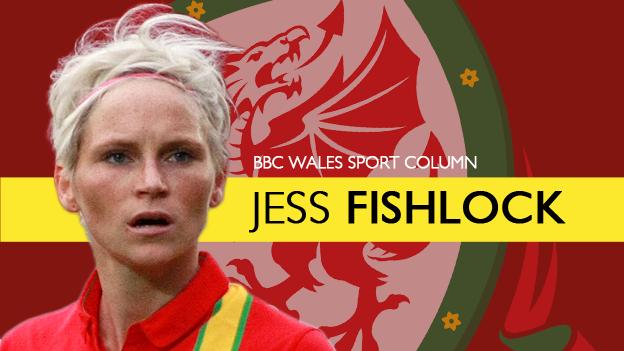 The Euros are upon us and I am super excited, even though my club commitments at Seattle Reign mean I cannot go and be a tourist in France.

Would I if I could? You bet! I would be there loud and proud and singing all the songs as I followed Wales all over France.

But I've been prepared for the fact my career comes first and that means prioritising Seattle Reign.

But the tournament should be fantastic, I can't wait to follow Wales' fortunes.

Wales can be brilliant

It is not just as a proud Welsh women that I follow Wales with so much optimism, I genuinely believe in this team and the job that Chris Coleman has done with them.

This is a properly talented side and it extends far beyond Gareth Bale.

If I wasn't in my season for Seattle Reign, I would have followed Wales in every game, for every mile.

It is so nice to see them qualified and they are good, genuinely good, they are a team I want to watch.

He's part of an amazing defence built around Ashley Williams, who is such a rock for them.

I actually think we have a very good team.

At least Seattle loves its 'soccer'

I am lucky being in Seattle.

I will be in a soccer bar, and yes, they call it soccer, not football, in a pub called The George and Dragon where they show loads of Premier League games.

It will be weird going there for breakfast and for coffee, trying to wake up before training by watching the games, but I will totally be there!

Hopefully a lot of Seattle fans will come and join me and follow Wales.

Seattle is a soccer hotbed, has been since the 1970s and I believe there will be some secret Welsh fans coming along.

Hopefully, because of me, I can recruit some Seattle Reign fans to come and support Wales.

So near and yet so far... again

Obviously it has been a disappointing time for Wales' female footballers, after our dream of reaching Euro 2016 ended with defeat to an excellent Norway side.

I haven't decided what that means for my own future yet, but I feel like we played very well against Norway, it was no disgrace to go out in the way we did.

We played so well, that's what hurts the most at the moment, it's a bittersweet feeling.

But we are getting stuck in that little pocket of 'could've, should've, but just fall at the last.' We've been in that bracket for probably the last three campaigns.

But with Jayne in charge now, with the group that she has and the way she is working right now, this is the best chance a Welsh group is going to have.

If anyone is going to break this cycle, it will be Jayne.