Crowd trouble and flares on the pitch marred the Euro 2016 Group D draw between Croatia and the Czech Republic.

The match was halted in the 86th minute when flares from the Croatia end rained down on the Saint-Etienne pitch.

A steward appeared to be hurt by a firework during a five-minute stoppage.

Ivan Perisic and Ivan Rakitic had given Croatia a 2-0 lead, but the Czechs hit back through Milan Skoda's header before Tomas Necid smashed in a penalty for handball in the 93rd minute.

That late equaliser will have hurt the Croatian players, who dominated much of the match, and the team could be punished further by Uefa for the fan violence.

Coach Ante Cacic's men were counting down to a deserved win before a volley of flares appeared towards the left of Czech keeper Petr Cech's penalty area.

Stewards and players went to the corner in an attempt to remove the objects and quell the trouble among the Croatia supporters.

However, one of the stewards appeared to be struck by a firework as he went to remove it and had to be escorted away by his colleagues.

English referee Mark Clattenburg eventually restarted the match, and in the additional time allowed the Czechs levelled after Domagoj Vida handled in the area.

Reaction to the trouble

A Uefa spokesman said disciplinary proceedings looking into the trouble in the stadium would begin on Saturday.

Croatia have already been charged for a pitch invasion and letting off fireworks during their opening game against Turkey.

Journalist Andy Mitten, who was at the game against the Czech Republic, told BBC Radio 5 live: "I was in a section full of Croatia fans. The team was playing really well, everything was good, the people around me were happy but then I noticed a big line of police and soldiers building up in front of the Croatia end.

"It became clear they knew something was going to happen and it did happen. I saw fighting. It was horrible to watch. It went on for two or three minutes before it calmed down."

Kevin Kilbane, who was working for BBC TV, said during the incidents: "It's ruined it, totally ruined it from Croatia's point of view. These are sad, sad scenes."

Read more reaction to the trouble in Saint-Etienne here

This was a match Croatia should have won.

Midfield duo Rakitic and Luka Modric led an impressive Croatian attack, as the Czechs struggled to contain them and mount any sort of response. They failed to have a single effort on target in the first half.

Inter Milan winger Perisic put Croatia in front when he ran on to the loose ball from Milan Badelj's mistake and fired in an angled drive. Rakitic doubled the lead after the break when he dinked his shot over the onrushing Cech.

Substitute Skoda gave Pavel Vrba's side a thread of hope when he directed a brilliant header in with 15 minutes remaining before Necid landed a final blow after the unscheduled interruption.

Modric, who left the field with an injury on 62 minutes, is a doubt for the final group game against Spain.

"The Czech Republic are a quality team. We played one of the best games since I've been coach and we had a lot of chances. But this is the Euro every team has chances. They scored two goals. What can I say?

"We should have won and had six points. I'm just happy about the team's performance - until it was 2-1, we did everything perfectly. After the interruption, we lost concentration. We're used to this kind of situation. We can only be stronger and better after this. I'm sorry we lost two points, but that's football."

"I'd be careful using the word miracle. We managed to get one point, which is very important for us.

"We'll play for everything in the last match. It wasn't going well, but we've given ourselves a spark of hope to get out of the group. All the players gave their utmost in the second half, and of course the two substitutes helped a lot.

"What helped most was that we didn't give up. We didn't give up on the point and I'm really proud of all the players. We didn't look at who was substituted - Luka Modric is important for Croatia, but I only look at my team.

A point from their final Group D game against Spain will see Croatia book their place in the last 16, and the Czech Republic will most likely advance with a victory over Turkey. 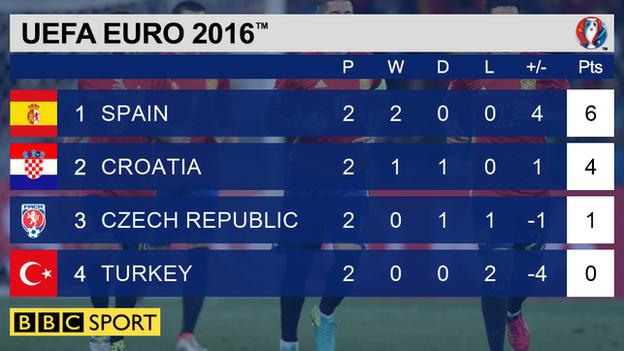