Wales stand on the brink of history with the sense of anticipation around the squad palpable on the eve of their first match at a major tournament for 58 years.

Chris Coleman's side face Slovakia in Bordeaux on Saturday in their opening Group B fixture of Euro 2016.

Yet Coleman has told his team they must focus on putting in a good performance before they are able to revel in the significance of the occasion.

"I thought it would never happen, but we're here. It's something we've dreamed about," he said.

"It's not the time to sit back and enjoy the moment.

"It's time to do what we can, perform like we can perform and then we will enjoy the moment."

Not here to have a laugh

Wales' last match at a major tournament was in 1958 - 35 years before Czechoslovakia reverted to Slovakia and the Czech Republic.

Slovakia, by contrast, played at a major international tournament as recently as the 2010 World Cup, but both sides are about to make their first appearance at the finals of a European Championship.

Coleman says he has no concerns about the fact Wales have won only one of their past seven matches, and he is eager for his players to immerse themselves in the magnitude of Saturday's encounter.

"Walking out will be something special but we've got to remember we're not just here to smile and have a laugh and a joke - we're here to perform," he added.

"If we perform, that's what it's all about. I just want to see them do what they're capable of doing.

"Taking points on top of that would be superb, but we can only do what's made us successful, concentrate on our performance.

"Just walking out and singing the anthem in any game when you play for Wales is the most powerful emotion.

"The fact we're at a tournament is the icing on the cake."

Coleman has spoken about doing the nation proud, seizing the opportunity that eluded the illustrious former Wales players who never qualified for a major tournament.

John Toshack, Neville Southall and Ian Rush are among those often mentioned, as is Ryan Giggs, who remains an inspiration to the talisman of the current side, Gareth Bale.

"He was my hero growing up, an amazing player and it would have been amazing for him to play on an international stage like this," said Bale.

"I've been playing for Wales for 10 years and it's been a massive goal of mine to get to a major championship.

"We've achieved that but, as I've said many times before, we don't want to come here just to make up the numbers.

"We've done something amazing our country hasn't done in a long time, but now we want to do even better."

How they line up 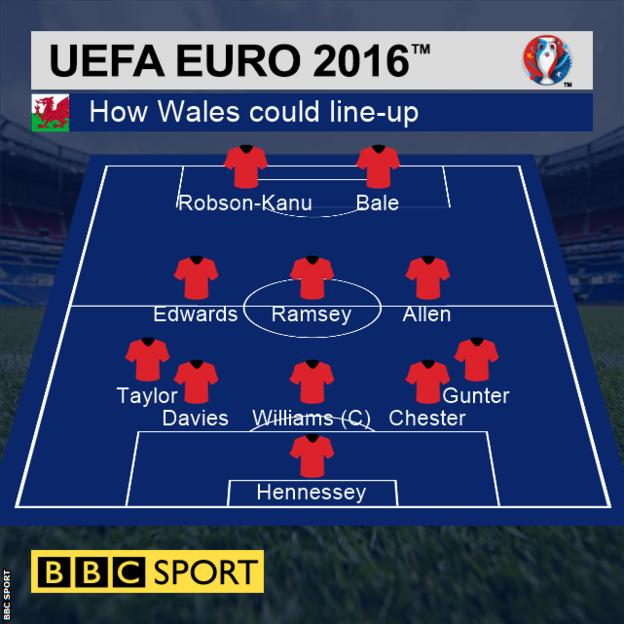 Bale insists Wales are not a one-man team, although it is no secret how pivotal a role the Real Madrid forward plays for his country.

Scoring seven and assisting two of Wales' 11 goals in qualifying, Bale is their undoubted star man- but what about the rest of the team?

Coleman favours a 5-3-2 formation, where the team's width comes from the two wing-backs, Chris Gunter and Neil Taylor, whose advances when Wales attack mean the shape can morph into a 3-4-2-1, allowing Bale and Aaron Ramsey to roam behind the lone striker.

Hal Robson-Kanu is likely to fill that position having recovered from injury, and his role is to occupy opposition defenders with tireless running to create space for the likes of Bale and Ramsey.

Holding in midfield are Joe Allen and, when fit, Joe Ledley. The latter is not expected to start against Slovakia having only recently returned to full training after breaking his leg in May, so he is likely to be replaced by Andy King or David Edwards.

The foundation upon which this team is built is the defence, which conceded just four goals in 10 qualifiers.

With Gunter and Taylor the wing-backs, the three centre-backs against Slovakia are expected to be captain Ashley Williams, Ben Davies and James Chester, whose main competition for a starting spot comes from James Collins.