Romelu Lukaku scored twice as Belgium recorded their first win at Euro 2016 and damaged the Republic of Ireland's chances of reaching the last 16.

After a goalless opening half, Lukaku scored the Belgians' first goal at the tournament with a neat finish from the edge of the area.

Axel Witsel headed in a second in the 61st minute, before Lukaku sidefooted home after a quick counter.

The Republic did not force goalkeeper Thibaut Courtois into a single save.

Relive Belgium's win over the Republic of Ireland

It means Martin O'Neill's side, who are bottom of their section with one point, will probably have to beat Italy in their final Group E game on Wednesday.

Belgium, meanwhile, are second on three points and next face Sweden. 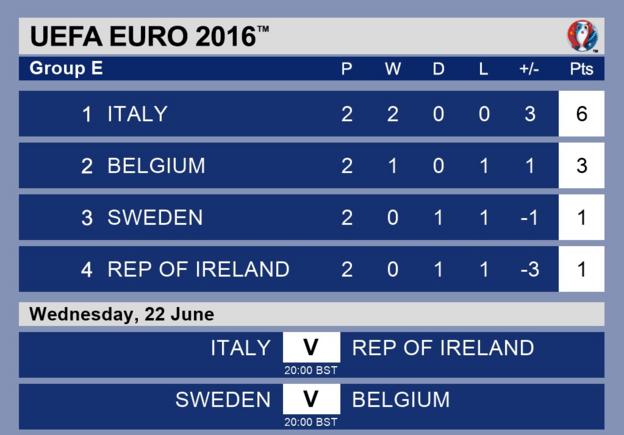 It was a disappointing performance from the Republic after a promising display in their opening fixture, when they drew 1-1 with Sweden.

Shane Long, operating as a sole striker, found himself isolated for long periods but may feel he should have won a penalty when he was caught by a wild Toby Alderweireld boot inside the Belgium area, just before Lukaku opened the scoring.

Belgians back to their best?

Belgium boast a wealth of individual talent and had topped the Fifa rankings within the last year, making them one of the favourites to go far in France.

However, they looked nothing like a team capable of winning the tournament against Italy, against whom they lost 2-0 on Monday.

The Belgians lacked fluidity and a sense of unity. As goalkeeper Thibaut Courtois put it: Tactically, technically and organisationally, they came up short.

It was a different story against the Republic.

They dominated possession throughout, with Eden Hazard and Kevin de Bruyne proving much more effective at stretching their opponent's defence than they were against the Italians. Both finished with an assist each.

The win means they are in a strong position to finish second in the group and, while they will face opponents much more attack-minded than the Republic, the victory will undoubtedly boost a side that had appeared lacking in confidence at the start of the tournament.

Play it long to Long

Before Saturday's game, Belgium's De Bruyne had suggested the Republic would be one of their toughest opponents because of their physical power.

An element of that physicality was missing on Saturday with Jon Walters not deemed fit enough to take his place in the side, but the Republic had showed against Sweden on Monday that they have another side to their game.

With the impressive Wes Hoolahan pulling the strings in midfield that day, the Republic were composed on the ball, retaining possession to build attacks before deservedly taking the lead.

Time on the ball was not as forthcoming against Belgium and when they did have possession, they went long. However, without Walters' ability to hold up the ball, it was a tactic that did not work.

Lukaku's opener did force the Republic to abandon their cautious approach but that in turn left gaps at the back for their increasingly confident opponents to exploit, which they did to full effect.

"Creativity was slack and there was no real spark in the side. I'm looking for a lot more going into the Italy match."

With no goals in 11 competitive games for club and country, Lukaku's place in the Belgium starting XI had come under scrutiny, especially after a lacklustre display against Italy.

In the first half against the Republic, he struggled to make an impact once again. The Everton striker did not have a single shot on goal in the opening 45 minutes, nor did he complete any successful dribbles or create a chance.

Coach Marc Wilmots resisted the temptation to replace him at half-time with Divock Origi, and it was a decision that paid off.

Moments after the second half started, Belgium hit their opponents on the break as De Bruyne fed Lukaku on the edge of the area and he placed the ball beautifully into the corner of the goal. He then showed good composure to pass the ball into the net following excellent work by Hazard for his second and Belgium's third.

If Belgium are to go far in this tournament, they will need Lukaku to perform like he did in the second half of this game on a consistent basis.

Man of the match - Romelu Lukaku

Republic of Ireland boss Martin O'Neill: "You have to analyse the performance and assess where mistakes are made. The first goal was vitally important and that came from our attack - they broke and got the goal. Then as we started to chase the game we got caught a few times, Belgium are a good side and put the game beyond us.

"We're bit disappointed with our performance considering how well we played against Sweden. We have to win this game against Italy and we feel that, once we've freshened ourselves up again, we'll be ready to go."

Belgium coach Marc Wilmots: "Unity is very important. We win and lose together.

"With Romelu Lukaku, we wanted to give him some confidence. I think he scored four goals in four matches but when he missed against Italy everyone was saying it's all different. I just needed to explain things to him and make sure he knew I trusted him. He did what I expected today."

The Republic of Ireland face Italy at the Stade Pierre-Mauroy in Lille in their final group game on Wednesday. Belgium's victory means the Italians have won the group, but Wilmots' side are favourites to finish second. A win against Sweden in Nice on Wednesday will ensure they do.