Sweden captain Zlatan Ibrahimovic has warned the Republic of Ireland that "the legend can still deliver" ahead of their Group E opener on Monday.

Ibrahimovic, 34, said he "came like a king, left like a legend" when departing Paris St-Germain last month.

Sweden face Ireland at the Stade de France, where Ibrahimovic played his last game for the French champions in a French Cup final win against Marseille.

"I feel I am getting better and better with every year that passes," he said.

"I have been dominating wherever I go. I have no issue about that.

"I am very confident. I go into the tournament with a strong season behind me and I am here in France, where I have been living for the last few years, to enjoy." 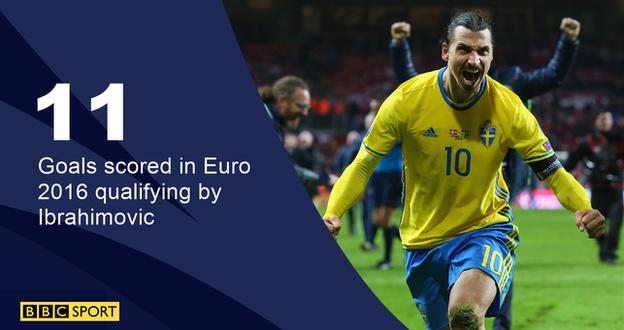 Sweden's hopes of progressing from a group also containing Italy and Belgium will rely largely on Ibrahimovic, who scored 11 times in the qualifying campaign.

"What I do every day is play football. You have to have the hunger to become a better player, to learn new things and work hard on the pitch," he added.

"If you want it, you are able to do it. I know what I want and I know I am going to do it - the legend can still deliver."