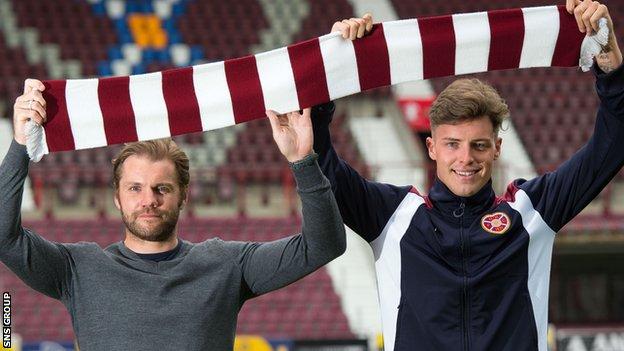 Hearts head coach Robbie Neilson says Robbie Muirhead has an opportunity to get his career back on track at Tynecastle.

"I'm pleased to get him," Neilson told BBC Scotland.

"I think he has good potential. He still has a long way to go but he is the type of player we want to get in."

United paid Killie a transfer fee of around £150,000 for Muirhead, handing him a three-and-a-half year deal in January 2015, but he only scored twice in 27 appearances.

He spent time on loan at Partick Thistle last season, scoring twice in eight games, with both goals coming against Kilmarnock in a 5-2 victory.

Muirhead was released by United in late April and Neilson hopes to coax the best form out of the Scotland Under-19 international after a frustrating spell at Tannadice.

"We all knew of his time at Kilmarnock," he said. "We had looked at him, then obviously Dundee United came in and paid a big fee for him and he went there.

"The way things have worked out with United getting relegated there was an opportunity to get back in and we have managed to do something.

"He did really well at Kilmarnock. We think coming here he still has a lot of hard work to do. We want to bring in Scottish players as well we want to develop."

'Two good additions to the squad'

Neilson confirmed that two further signings, Conor Sammon and Faycal Rherras, will join up with the squad for pre-season training this week.

"Connor gives us a bit experience up front. He played really well when he was at Kilmarnock and got a big move to England. He has played at the highest level down there so I'm really pleased top get him.

"Rherras is a good addition at left back. He is young, he needs to develop. He has played at the top level in Belgium. He has recently been playing for the Moroccan under-23s. He is a good player and another we think we can develop."

Neilson also hopes to bring in a goalkeeper before Monday's deadline for players to be registered for the first Europa League qualifier on 30 June.

"There has been a lot of goalkeepers put to us and we are still going through it and trying to get the right one," he said.

"Jack Hamilton did really well for us at the end of last season so we've got him.

"We would like to get a couple more additions in but it's proving more difficult than we had hoped. We will see how it goes in the next couple of days."