Football fans up and down the country can start to plan their schedules, book time off work and look forward to the big matches following the announcement of the Premier League fixtures for the 2016-17 season.

BBC Sport has taken a look at when some of the big matches, managerial reunions and hostile welcomes are scheduled to take place throughout the season.

All dates and times of matches are subject to change.

Manchester City captain Vincent Kompany has helped his side win the Premier League title twice and the fixtures he looks out for are, unsurprisingly, the Manchester derbies.

"They are the ones I enjoy most," said Kompany who is working for BBC Sport as a pundit during Euro 2016. "In all the fixtures you have good and bad moments but playing against Tottenham is always a good occasion.

"Next season I'm also looking forward to playing West Han away in a different stadium. It will be a new experience and it adds a new dimension to the Premier League."

Jose Mourinho won the Premier League title with Chelsea on three occasions and it may well be an emotional occasion on 22 October, when he takes his new Manchester United side to Stamford Bridge.

New Everton boss Ronald Koeman will expect a lively reception when he faces his former side Southampton on 26 November with the return game at Goodison Park on 2 January.

Bournemouth boss Eddie Howe takes on a Burnley side he managed for a year with the two teams meeting in Burnley on 10 December and then again in Bournemouth on the penultimate weekend of the season.

BBC Sport's Simon Stone: "Champions Leicester City can have no complaints about how their entry into European football has been treated.

"Top four managers tend to look with suspicion at the fixtures that follow each of their Champions League games, when travel fatigue can be a factor.

"Foxes boss Claudio Ranieri will be happy to see his side have been given six home games immediately after those matches, Arsenal have four and Tottenham two.

"Manchester City have three but they must get through an August qualifier before new manager Pep Guardiola can be certain of a familiar campaign in Europe's premier club competition." 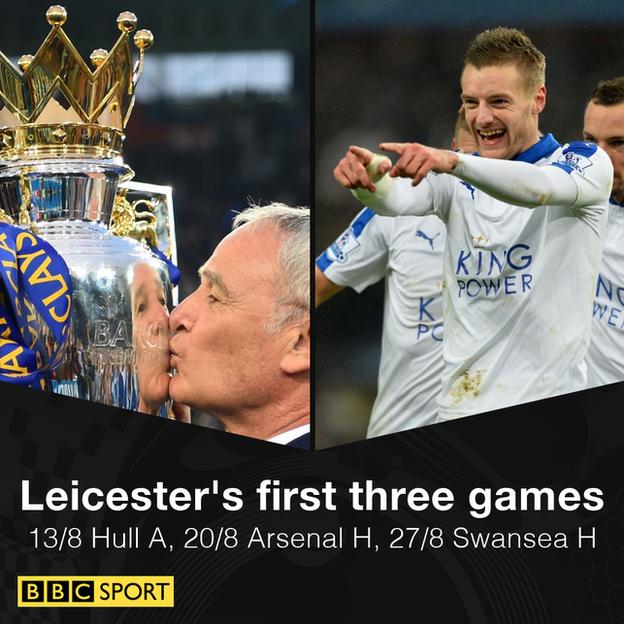 But bad news for the England boss

BBC Sport's Simon Stone: "Premier League managers are not the only ones who keep a close eye on fixtures release day. International managers also get affected, especially when matches involving their players get moved for TV.

"So Roy Hodgson, if he remains in charge of England beyond Euro 2016, might not be too happy to find some of the games that immediately precede World Cup qualifiers.

"Tottenham and Liverpool, who between them are responsible for 10 of Hodgson's 23-man squad in France, play in the last round of matches before the September internationals, Tottenham v Man City is before October's.

"Arsenal have a North London derby against Tottenham before England play Scotland on 11 November.

"And Manchester City play Liverpool and Tottenham take on Southampton before March's games."

Tottenham finished third last season, their highest ever position in the Premier League, and travel to Goodison Park on the first weekend of the campaign. It will be Ronald Koeman's first game in charge of Everton and former Spurs midfielder Jermaine Jenas thinks that will make it tougher for the London side.

"Tottenham have set the benchmark of what they can achieve and they should be going for the title this year," Jenas told BBC Sport. "Every match at Everton is tough, but with a new manager even more so."

'Liverpool are one of the favourites'

Former Arsenal defender Martin Keown says his side will get off to a great start to the season if they can defeat Jurgen Klopp's Liverpool on the opening weekend.

Arsenal finished second in the Premier League, while Klopp guided Liverpool to the Europa League final, and Keown believes the Anfield side will be Premier League title challengers this season.

"Jurgen Klopp will have brought in new players by then and if Arsenal can win that game then they are off and running as I see Liverpool as one of the favourites," Keown told BBC Sport.

Here are the fixtures for the final weekend of the season on 21 May. Will a team already be crowned champions by then? Or could it go down to the wire?

Your reaction to the fixtures being announced

Diana Brighouse: New fixture list :) Glad we've got an away game the day of my daughter's wedding! #saintsfc

Martin Walsh: A tough start for Arsenal and with a north London derby on the 5th of November, there will be fireworks!

Rob Mullarkey: Looking forward to the first 'Eddie Howe' derby. Burnley v Bournemouth on Dec 10 with the reverse on May 13.

Grundy: Excitedly looked through the new fixtures, and then the realisation that Aston Villa definitely aren't there hit me again :(

Nkosilathi Makhaza: Manchester derby nice and early. It will be tougher for Pep than Jose considering Jose's Premier League experience.

Statistics about the opening day matches

Chelsea have won more points than any other Premier League side on the opening weekend of action (51 points).

Liverpool have only won one of their last 16 Premier League away trips to Arsenal (won one, drew seven, lost eight).

Four of Manchester United's five opening day defeats in the Premier League have come away from home.

Wayne Rooney has scored more goals on the opening weekend than any player currently playing in the Premier League.

Sunderland have never won away at Manchester City in the Premier League (won none, drew two, lost 10).

Watford managed just one shot on target in 180 minutes of Premier League action against Southampton in 2015-16.

Your team's fixtures in full