England manager Roy Hodgson says it is a long time since he celebrated a goal as much as Daniel Sturridge's winner against Wales at Euro 2016.

Substitute Sturridge poked home in the 91st minute to give England a 2-1 victory in the Group B match in Lens.

"It's a long time since myself and the coaching staff have showed such joy," Hodgson told BBC Radio 5 live.

"When the chances don't go in and you've compounded your task by conceding that Gareth Bale goal, it really is a happy moment when both the substitutes score.

"I thought it was on the cards all the way through the second half."

England conceded a stoppage-time equaliser in their 1-1 draw with Russia in their opening game on Saturday.

Hodgson added: "I have great empathy with Chris [Coleman] and the Welsh team because he must have been looking at a good draw. He will be today as I was on Saturday night."

England, who had almost 70% of possession and had 20 shots to Wales' eight, moved top of Group B, a point above Thursday's opponents and Slovakia.

Hodgson's side face Slovakia in the final round of group games in Saint-Etienne at 20:00 BST on Monday, when Wales play Russia.

England, now top of Group B, need a point against Slovakia on Monday to earn automatic qualification into the last 16, while Wales must win against Russia to guarantee a top-two finish.

However, a point will be enough to send Wales through if Slovakia do not beat England. 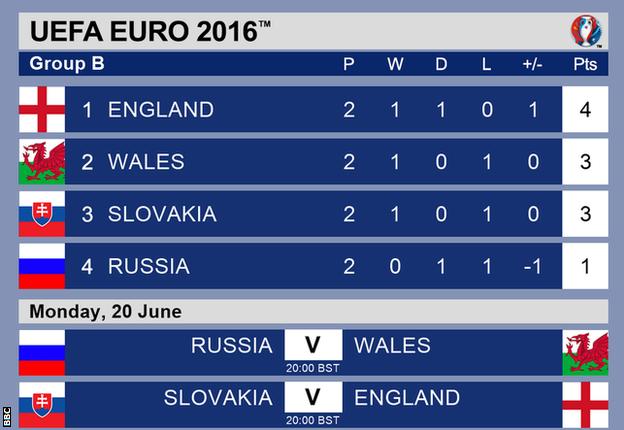 England manager Roy Hodgson: "We thought a lot about what the starting XI should be but I didn't want to start breaking eggs with a big stick. I thought I would keep one or two up my sleeve.

"I was kind of counting on us seeing out the first half and then making a change but the goal meant it was pushed on to me a bit.

"It was always in our thoughts to bring on Vardy and Sturridge, and then bring on Jack Wilshere or Marcus Rashford when we were looking for a goal."

Wales boss Chris Coleman: "Congratulations to Roy. He made some good substitutions and we knew they would push us back.

"Most of the time we looked quite strong and, although they had a lot of possession, I wasn't that worried.

"But when you are bringing on the likes of Vardy and Sturridge and [Raheem] Sterling and [Harry] Kane going off... they are top players.

"The guys showed great heart. They stuck into the game and, with 60 seconds remaining to give up that point we worked so hard for, we are gutted.

"We are here to get through to the last 16. We move on and have to show a reaction against Russia. If we get a result we are still in the tournament and have all to play for."

England striker Daniel Sturridge: "It is a great feeling to represent your country in a rivalry against another great country.

"It is just one more game and I am trying not to get too excited - but the atmosphere is unbelievable.

"It is not often you experience this. It is great to help the boys win."

England striker Jamie Vardy: "Everyone wants to be a part of the starting line-up but it is a team game. There are 23 of us and we are all in it together. I am happy to come on and make a difference.

"We thought we were playing well. The half-time message was simple: carry on what you are doing and hopefully the goals will come. Thankfully they did.

"We just want to take each game as it comes. Hopefully we'll get a win next game and top the group."

England captain Wayne Rooney: "We were unfortunate to go in 1-0 down. The manager made some positive changes and we played really well second half. We showed a lot of character.

"We know as a group we are not just 11 men. We have 23 who are all capable and trust each other to do a job.

"We played some great stuff, it is a great victory and a fully deserved one. Now we need to finish the job off on Monday."

Wales captain Ashley Williams: "It is tough for everyone but we have another game on Monday. It is a quick turnaround so we won't get down about it.

"We were close to another point but we didn't get it. We've all felt like this before and we have to get over it, stay together as a squad and move on.

"We have spoken and the manager has spoken. It hurts.

"We can still qualify and it is all about recovering, focusing on the next game and getting through the group."

Former England captain Alan Shearer: "I said at half-time Roy Hodgson's neck was on the line so he was within his rights to tell those who started that their time was up and put new people on. He put more bodies up front and the guys who came on made an impact.

"Wayne Rooney is the only England player who has been tremendous in both games. He was man of the match in the first game and he won't be far away in this game."

Ex-England defender Rio Ferdinand: "We criticised Roy Hodgson for his subs in the last game but we have to give him credit this time. He brought five strikers and that's why they flooded the box and the chances fell to the right people."

Former Wales midfielder Robbie Savage: "I don't think Wales played that well as a team. Wales were hanging on in the second half and you have to say, Roy's subs have won England the game. Fair play, but Wales will live to fight another day."

Ex-Wales striker Dean Saunders: "We were so close to getting a result but all credit to Roy Hodgson - he put goalscoring players on and they won it for them.

"Jamie Vardy, it's no coincidence it dropped to him. Daniel Sturridge played a nice one-two for the winner.

"It's sickening for the Welsh boys but both teams are still in it."

How did the fans behave?

The build-up to the game had been marred by trouble involving fans and French police but the Welsh and the English supporters came together to create a positive atmosphere inside the Stade Bollaert-Delelis in Lens.

Mixing together before the game, both sets of supporters applauded each other's anthems before kick-off.

At the fan zone in nearby Lille - where England fans appeared to be outnumbering those from Wales - supporters were in good voice throughout the game.