Germany reached the Euro 2016 semi-finals after winning a thrilling penalty shootout against Italy in Bordeaux.

Joachim Low's World Cup holders looked on course for victory in normal time - against a country they had never beaten at a major tournament - when Mesut Ozil rounded off a slick build-up with Mario Gomez and Jonas Hector to score at the near post in the 65th minute.

Italy did not flinch but were grateful for a moment of madness from Germany defender Jerome Boateng when he needlessly handled, allowing Leonardo Bonucci to score the first penalty of his career with 12 minutes left.

Germany missed more penalties in one shootout than in their history - three - but were once again the winners on penalties.

They have still never lost a shootout since the 1976 final of this competition when they lost to Czechoslovakia - some 40 years and 13 days ago.

Germany will now play either hosts France or England's conquerors Iceland in the last four.

Germany on course for glory

This was a meeting between two of European football's superpowers - a last-eight match-up that would have graced the final itself in Paris next weekend.

Instead it was a fight for a place in the last four and Low's Germany did what they do best. They found a way to win, however it was achieved.

Ozil's goal crowned a spell of second-half pressure which meant their lead was deserved, but they then creaked as two of the staples of Germany's football psyche folded under pressure.

With Italy struggling to get back on terms, they were guilty of desperate defending when Jerome Boateng's 'hands-up star jump' conceded the penalty that Bonucci put away with such assurance.

And then in the shootout itself, a team renowned for cool heads in this situation suddenly seemed to find itself gripped by nerves.

When Thomas Muller saw his spot-kick saved by Buffon, it was the first time they had missed a spot-kick since Uli Stielike at the 1982 World Cup in Spain, and Ozil also hit the post.

Indeed, Germany had only missed two penalties - Uli Hoeness the other culprit in that 1976 final with Czechoslovakia - but it was catching, Bastian Schweinsteiger firing wildly over with a chance to clinch it.

However, this was all forgotten in the celebrations as Germany close in on another major title.

The great goalkeeper Gianluigi Buffon was winning his 161st cap for Italy here, putting him 10th on the international all-time list - but were we seeing the farewell to this 38-year-old legend of the game when Hector's penalty slipped under his body to give Germany victory?

Buffon's passion and ability still make him an outstanding keeper, as proved by a magnificent save from a close-range combination of Mario Gomez and Giorgio Chiellini in the second half.

He has no reason to step aside but this was a tearful, and perhaps significant, farewell on the big stage for this emotional, patriotic Italian as he congratulated his German opponents before breaking down as he walked off.

This is the man who has seen it all, from winning the World Cup against France in Berlin in 2006 to being a losing finalist to Spain in this competition in Kiev four years ago.

Buffon's status and standing will never diminish, but will he feel that this will be his final fling at a major tournament and it is time to make way for Italy's younger goalkeeping generation?

Departing Italy coach Antonio Conte has been one of the most charismatic figures at Euro 2016, with his animated touchline demeanour a powerful ally to the team he set up so brilliantly to beat Belgium and then holders Spain in the last 16.

He has whetted the appetite of Chelsea's fans, who will now eagerly await his arrival at Stamford Bridge now Italy are out of the tournament, his reputation as one of Europe's premier coaches greatly enhanced.

Here in Bordeaux, however, his final ploy did not pay off.

With seconds left in extra time he decided to take off the experienced Chiellini to send on Zaza, who barely had time to get on before Hungarian referee Viktor Kassai blew the final whistle.

It was clearly a move to utilise Zaza's penalty expertise - and so it proved as he took Italy's second penalty, but it backfired horribly as he indulged in some form of Morris dance before blazing his spot-kick hopelessly off target.

This was a rare miss-step by Conte, who will bring real quality and excitement when he takes charge of Chelsea in the Premier League next season. 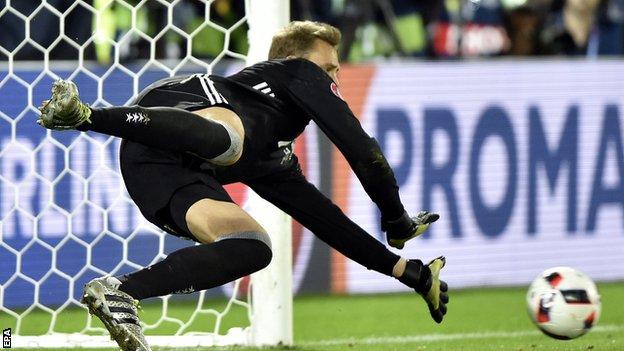 The Germany goalkeeper was an assured presence throughout and was also superb on the ball, before saving twice in the decisive shootout.

Italy manager Antonio Conte: "I want to thank the boys. They were extraordinary for two years for me. They topped it off with this special experience. I'm sorry because they deserved to go though.

"We made the fans proud of us. And we made the players truly aware that it's a privilege to wear the shirt."

Germany manager Joachim Low: "It was a drama - extra time and with two sides on the highest tactical level. The penalties missed were even more dramatic. We were lucky.

"There is nothing I could blame the team for. We were the better team in the 120 minutes. We'll recover now and on Thursday we'll continue. The experienced players missed and the young players scored."