Hosts France advanced to the Euro 2016 final with their first victory over Germany in a major tournament since 1958 on a night of high emotion in Marseille.

Antoine Griezmann, the tournament's top scorer, made the decisive contributions in each half to set up a final against Portugal at the Stade de France on Sunday.

Griezmann scored from the penalty spot right on half-time when Germany's Bastian Schweinsteiger was penalised for handball by Italian referee Nicola Rizzoli in an aerial challenge with Patrice Evra.

France held out against German pressure before Griezmann settled the destination of a pulsating semi-final with 18 minutes left when he turned in from close range after keeper Manuel Neuer could only half-clear Paul Pogba's cross.

Joshua Kimmich then hit the woodwork for Germany and also saw a header brilliantly saved by France keeper Hugo Lloris - but there was no way back for the World Cup holders.

France made a slow start to Euro 2016 but there was a real sense inside Marseille's vast Stade Velodrome that Didier Deschamps' team are now being carried towards the finishing line in Paris on Sunday by a national tide of emotion.

It was, of course, during a friendly between France and Germany at the Stade de France, which will stage Sunday's Euro 2016 final, that the first explosions were heard on the night of the Paris attacks in November in which 130 people died and hundreds of others were wounded. Fourteen players who started that night were in the line-ups that took to the field here in Marseille.

The atmosphere inside the Stade Velodrome was electric after a day of searing temperatures and the togetherness now felt between France's players and their supporters was summed up in one moment in the second half.

Germany were applying pressure in an attempt to claw back a 1-0 deficit when the whole ground erupted into a rousing chorus of national anthem La Marseillaise to urge their team on.

One more task remains against Portugal on Sunday - the whole of France expects.

Antoine Griezmann carried the hopes of a nation into Euro 2016, the diminutive Atletico Madrid forward seen as their greatest threat and biggest weapon.

And how the 25-year-old has delivered, making light of the burden of expectation to emerge as a talisman and match-winner, taking his tally for the tournament to six - the same number of European Championship goals as Thierry Henry, whose tally came across three tournaments.

Griezmann may not yet be in the class of Lionel Messi, Cristiano Ronaldo and Luis Suarez but every performance here at this tournament pushes him closer to that bracket.

He made the difference with two goals when France were trailing to the Republic of Ireland in the last 16 to wrestle the initiative away from Martin O'Neill's side and here, on an even bigger stage, he was the game-changer once more.

Griezmann had already tested Neuer with a low shot after a slick exchange with Blaise Matuidi and even during a period of complete German domination in the first half, he never let the World Cup holders relax.

He put his pressure penalty away with assurance right on half-time then reacted coolly when Neuer could not deal with Pogba's cross.

Griezmann has a superb first touch, links play with quality, is an all-round team player and scores vital goals. He is the complete package.

He is carrying France alone in attack at times as Olivier Giroud continues to struggle, with the France supporters now increasing the volume of criticism, but with Griezmann there is always hope and he will be their inspiration again in Paris on Sunday.

Germany have failed to follow France and Spain in doing the double of holding the European Championship and World Cup at the same time.

They have been the scourge of host countries in the past, defeating six at the semi-final stage in major tournaments, including England at Euro 96 and, most memorably, thrashing hosts Brazil 7-1 at the 2014 World Cup.

France were able to fight the curse on this occasion and run out winners.

Here, Joachim Low's side performed impressively for long periods but either lacked the killer touch or found themselves repelled by fiercely determined French defending or outstanding keeping from Hugo Lloris.

Germany have also found a way of giving away needless penalties, Schweinsteiger once again inviting punishment with a raised arm with his team dominant - in the same manner that Jerome Boateng gifted Italy a penalty in the quarter-final.

On this evidence, Germany remain a European football superpower but every weakness was exploited by France in front of an ecstatic home crowd. 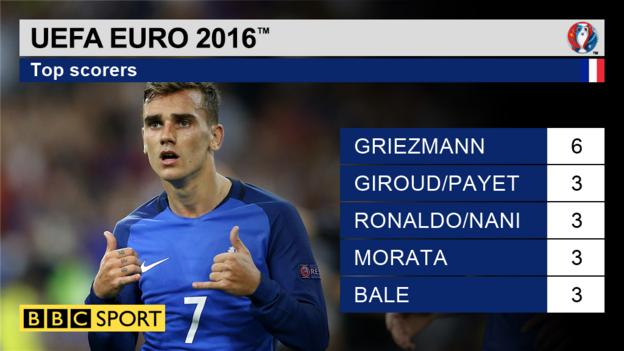 "A sign of a great team is that you take advantage of mistakes. You punish a team. France did that. They were like an Italian or German side of old times. Two opportunities. Two goals.

"I am actually so emotional at the moment. It's nice to see that togetherness in the team, and with the fans. At the back they were great, Evra, Sagna, Umtiti. Everybody.

"The main man Griezmann, we all knew that he had to play this type of game. We again have a hero, a striker who can make us win tournaments. Hopefully. What a player.

"We were the better team. We had good body language. We were good in the one-on-one. It was unfortunate that we conceded the goal.

"The side did everything I told them. We had a lot of courage. There's nothing to blame them for.

"We had our chances. Regretfully we didn't score. We didn't have the luck we needed."

France manager Didier Deschamps: "I'm delighted for the players. It was a tough game against a team that made us suffer but we suffered together.

"We haven't only had easy games. Germany were and are still the best side. We did what we needed to do. We were clinical, and Lloris was great when we needed him to be.

"We are in a final. We have our chance and Portugal have their chance too. It's not as if just because we're hosts and have knocked out Germany that gives us extra power. Portugal believe in themselves, and we believe in ourselves. It's still very open."

"We have to rest up well and already start thinking about the final. We will start training for it tomorrow.