The England winger, 24, has completed his £13m move back to the Premier League, with Dwight Gayle going in the opposite direction in a separate deal.

Mandanda, 31, is at Euro 2016 with France but has joined from Marseille for an undisclosed fee.

"I'm extremely delighted and pleased to be a part of Crystal Palace's future," Townsend said. 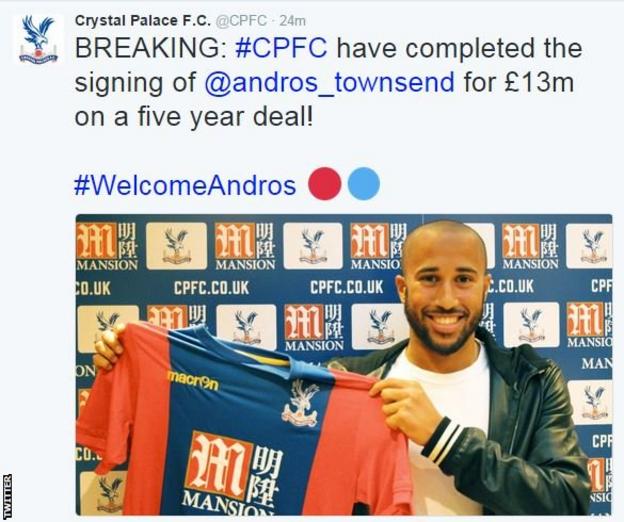 Townsend came through the youth set-up at Tottenham, for whom he made his senior debut in January 2011.

Having had loan spells at nine other clubs - eight of them in the Football League - he established himself in the Spurs team and made 93 appearances in all competitions before his move to Newcastle.

Palace chairman Steve Parish said: "It's fantastic that we've managed to get a player of Andros' quality into the club. He has played in the Premier League for a number of years and represented England.

"I can't wait to see him in a red and blue shirt in the very near future."

Mandanda made 443 appearances for Marseille during his nine seasons at Stade Velodrome, where he won one league title and three French League Cups.

He was named Ligue 1's Goalkeeper of the Year last season.

Parish added: "Mandanda brings a wealth of experience at both club and international level to us, and boasts a proven track record when it comes to winning trophies."