Jose Mourinho has given his strongest hint that Manchester United want to re-sign Paul Pogba from Juventus by saying "you have smoke, you have fire".

The Red Devils are reported to have agreed a world record £100m transfer for the 23-year-old Frenchman.

"I am not going to try to make you naive and believe that we are not trying for one player," said Mourinho.

The Portuguese manager has made three signings so far this summer, bringing in defender Eric Bailly from Villarreal, midfielder Henrikh Mkhitaryan from Borussia Dortmund and striker Zlatan Ibrahimovic.

When asked about the possible signing of Pogba, Mourinho replied: "We set four targets for us, we got three of them and we are going to get the fourth.

"We established the profile of four players to improve the squad, to give us more options, especially adapted to my way of thinking about football.

"Everybody speaks about one, but it wouldn't be a surprise for me if it is not him and it is another one because we went for profile.

"We have two more options in front of us and we are going to close one."

United's FA Cup triumph last season was the first piece of silverware the club has won since Sir Alex Ferguson retired as manager in 2013.

Under the Scot, they won 13 Premier League titles, five FA Cups and two Champions League titles in the space of 26 years.

"It is very important to forget the past three years and to focus on good times," added Mourinho.

"I don't think it's possible for Manchester United to win so much in the next 20 years than in the past 20 years.

"There was a very important evolution in our Premier League.

"I want to bring the motivational levels up and bring the confidence back, but be intelligent and know the reality we face in the Premier League is different than 10, 20 years ago." 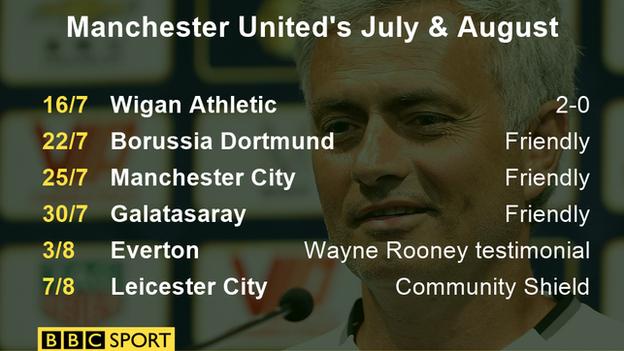 Following the arrival of Mourinho to replace Dutchman Louis van Gaal, who was sacked in May, there has been speculation over the future of Wayne Rooney at Old Trafford.

The 30-year-old was made captain by the previous boss and is just four goals adrift of Sir Bobby Charlton's club record of 249, but was part of a disappointing Euro 2016 with England in the summer, playing as a midfielder.

Rooney was the subject of two failed transfer bids from Chelsea when Mourinho was manager in 2013.

"I trust him a lot. I think he's going to be a very important player for me and no problem for him."

Space for Mata at United

Midfielder Juan Mata's position has also come under scrutiny as Mourinho sold the Spaniard to Manchester United for £37.1m in 2014.

But Mourinho says "there is a space for Juan" in the team and that he must "fight for a place".

He added: "First of all, I think maybe all of you misunderstood what happened in our previous club because I never told Mata to leave. I never pressed the club to sell him.

"But, to be fair, I think he is happy and I am not expecting him to ask to leave."