David Moyes has been appointed Sunderland manager on a four-year deal.

The former Everton and Manchester United boss, 53, takes charge at the Stadium of Light after Sam Allardyce left to become England manager.

"I have taken over a big British club, with a great support, and I'm looking forward to working in the Premier League again," said Moyes.

The Scot has been out of work since being sacked by Spanish club Real Sociedad in November.

Allardyce was confirmed as Roy Hodgson's successor with the national team on Friday.

Moyes was 'number one target' - chairman

Sunderland chairman Ellis Short said Moyes was "by far and away first choice" to take control of the Black Cats and that he had tried to recruit him several times before.

"He is a man whose football pedigree speaks for itself and is someone I have long admired," said Short.

"I have spoken with him on many occasions and I have always been hugely impressed.

"He was my number one managerial target for the last five appointments, but his desire to honour existing contracts meant we were not able to bring him to Sunderland previously. To be able to finally welcome him as our manager is fantastic news for the club." 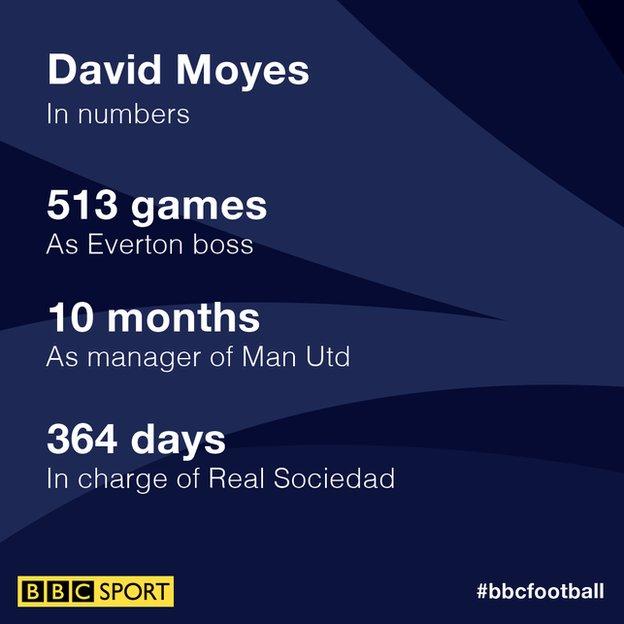 Moyes, who started his managerial career at Preston North End, was voted LMA Manager of the Year three times during an 11-year spell at Everton.

He succeeded Sir Alex Ferguson as Manchester United boss on his fellow Scot's recommendation when he retired after a trophy-laden 26 years in charge at Old Trafford.

But despite signing a six-year deal with the then Premier League champions, he was sacked 10 months later and went on to manage Real Sociedad in Spain.

Moyes was tipped to take over at Aston Villa earlier in the summer but ruled himself out of the running and the job went to Roberto Di Matteo.

"I look forward to continuing the good work done by Sam," said Moyes of the Sunderland role.

He will be the club's fourth manager in less than three years, following Gus Poyet, Dick Advocaat and Allardyce.

Former Bolton, Newcastle and West Ham manager Allardyce joined Sunderland in October 2015, with the club second bottom in the Premier League and winless in their opening eight games.

But they recovered to finish 17th, one place above their relegated north-east rivals Newcastle United.

"David Moyes will benefit from the structure and order Sam Allardyce brought to Sunderland and will look to get a full understanding of the club and its players.

"Cautious by nature, Moyes is an evolutionary, rather than revolutionary, coach. He knows Allardyce well enough to be aware of the problems England's new manager was having trying to buy players.

"It is also worth remembering that after an excellent first full season at Everton, the second had them flirting with relegation.

"History suggests if Sunderland owner Ellis Short is patient with Moyes, he will be rewarded. Yet patience is a commodity in short supply virtually everywhere in football these days."