The FA could lose millions of pounds of funding if it does not reform, says Sports Minister Tracey Crouch.

Money will be given to other projects, and potentially county football associations, if changes are not made, she told BBC Radio 5 live's Sportsweek.

Crouch said: "I'm not shy to say to the FA 'if you don't reform your governance structures, I will give that money to other bodies that deliver football'."

She said the governing body receives £30m to £40m of public funding.

"We have a massive problem in this country at the centre of English football. I'm talking about an outmoded structure which is not modern enough and not independent enough," he said.

Asked about his comments, Crouch replied: "I share David's frustration. That's why we've made it clear that all sports governing bodies have to reform their governance codes.

"The FA is not excluded from that, and if they don't, they won't get public funding. It's as simple as that."

A report from the Commons Culture, Media and Sport Committee in 2013 called for reforms in English football - and outlined concerns including financial management as well as the balance of power between the Premier League and the FA.

Crouch said there was good work being carried out by association executives but problems revolved around the FA Council, which has 124 elected members.

"If there's no move whatsoever, and at the moment we are seeing nothing from the FA in terms of progress, they are likely to lose some public money or it will go elsewhere in the delivery of football," she added.

The FA declined to comment, although a source stressed that it is a not-for-profit organisation with government funding ploughed into grassroots football. 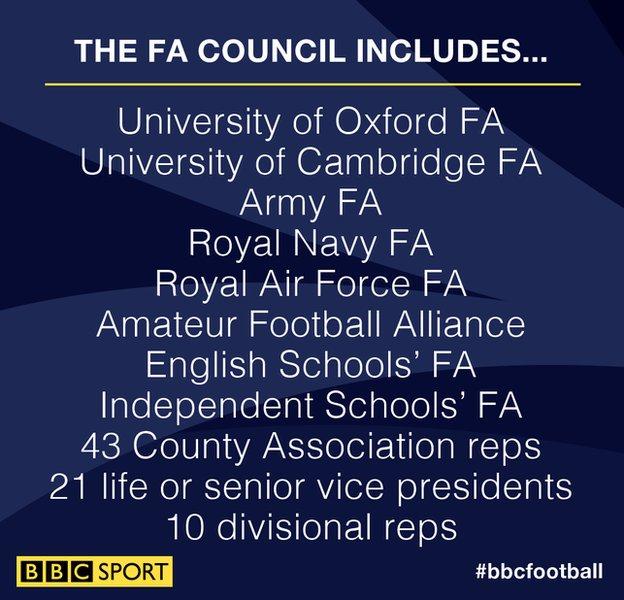