A supporters' group says English Football League fans are "angry" about the cost of tickets for away games, with some paying 40% more than Premier League prices.

In March, Premier League clubs agreed to cap away ticket prices at £30.

But seven of the Championship's 24 teams will be charging more than that for their first away game this season.

The cost has prompted Villa fans to arrange protests at the game, with some planning to attend wearing robbers' masks at Hillsborough.

'There's a lot of anger at the moment' 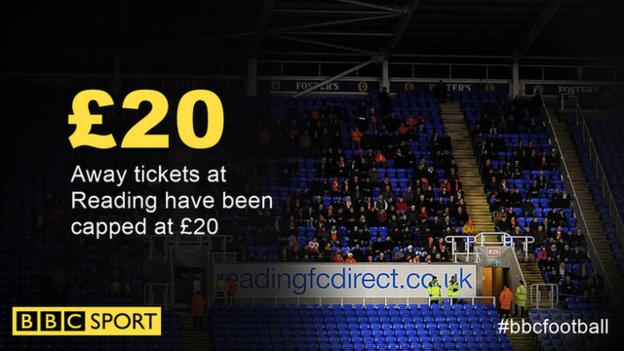 The Premier League's decision to cap prices at £30 for the next three seasons came in during a campaign in which admission prices for away fans peaked at £85 for the most expensive adult ticket.

A spokesman for the Football Supporters' Federation, Liam Thompson, says some clubs outside the top flight "treat away fans as an opportunity to make as much money as they possibly can".

In League One, Sheffield United's supporters are paying the most of any team in their division for their season opening trip to Bolton Wanderers, with entry to the Macron Stadium costing £30.

Huddersfield Town, Burton Albion and Reading offer the cheapest tickets to visiting fans in the Championship for their first home games at £20, while Gillingham and Crawley charge the lowest amount in League One and League Two respectively at £16.

"There's a lot of anger at the moment I think this season, particularly because the prices in the EFL [the new name for the Football League] have been thrown into sharp contrast against the Premier League," Thompson told BBC Sport.

"But there's lots of clubs who are doing a lot of good things, Reading have capped their away ticket prices at £20.

"So there are clubs in the Championship and in the EFL who have shown it is possible to give affordable away tickets to fans even outside of the Premier League's TV money bonanza."

In contrast to falling prices in the top division, Aston Villa fans travelling to Hillsborough will pay £12 more than the £30 Premier League cap.

At £42, entry costs three pounds more than the most expensive away ticket in the second tier last season.

But a spokesman for the EFL said in March that its clubs offered "excellent value for money", and added that ticket sales make up a greater proportion of revenue for teams outside the Premier League.

A statement from Sheffield Wednesday said pricing for their season opening game was dictated by demand and calibre of opposition, with Villa playing in the second tier for the first time since 1987-88.

"Sheffield Wednesday have in place a flexible ticketing structure that we implemented last season, whereby each fixture is categorised and priced respectively," the club said.

"This strategy worked very successfully amongst our fan base in 2015-16, borne out by a significantly increased average attendance at Hillsborough, and as such will be extended into the new season.

"The first game of what promises to be an exciting campaign for both ourselves and Aston Villa was priced accordingly and we are pleased to say there will be an attendance in excess of 28,000, with fantastic support from both clubs."