Seven Premier League clubs will start the season with new managers, four of whom have no experience of English football.

So what can we expect from them? And what do their previous managerial roles tell us about the impact they will have?

If there is one criticism aimed at Manchester City's new manager, it is that he inherited successful teams at Barcelona and Bayern Munich and little work was needed to make them into title winners during his tenure.

However, while he arrived after a treble-winning season at Bayern Munich three years ago, the Barcelona side Guardiola took charge of in 2008 had won nothing the previous year, had lost nine times in the league and finished third.

In Manchester City, he finds himself at a club in a similar position. The English side finished fourth in the Premier League last season, lost 10 times and, like Barcelona in 2007-08, were knocked out in the Champions League semi-finals.

There is work to be done, just as there was at the Nou Camp eight years ago. So what will the man considered by many to be the world's finest coach focus on at Etihad Stadium?

Manchester City were the top scorers in the Premier League last season but had only the fifth best goals-against record, leading many to believe it is their defence that is Guardiola's main priority.

But he won the league title in his first season at Barcelona by significantly improving the side's goalscoring record (an increase in league goals of 38%), winning in the same free-scoring style that saw City lift the Premier League trophy under his predecessor Manuel Pellegrini two years ago.

Guardiola did pay Everton £47.5m for England defender John Stones on Tuesday, but he is City's only defensive reinforcement - and they have spent more than £70m on attackers Leroy Sane, Nolito and Gabriel Jesus. So, expect plenty of goals at the Etihad this season.

The new Chelsea manager has experience of reviving a fallen giant after taking over Juventus in 2011 following the fallout from the Calciopoli match-fixing scandal.

He lifted them from seventh in the season before his arrival to three successive titles. He joins a Chelsea side who made such a hash of their title defence last season that they finished 10th.

Only eight teams conceded more than Chelsea's 53 goals, an anomaly for a club so used to a strong defensive base built around captain John Terry. 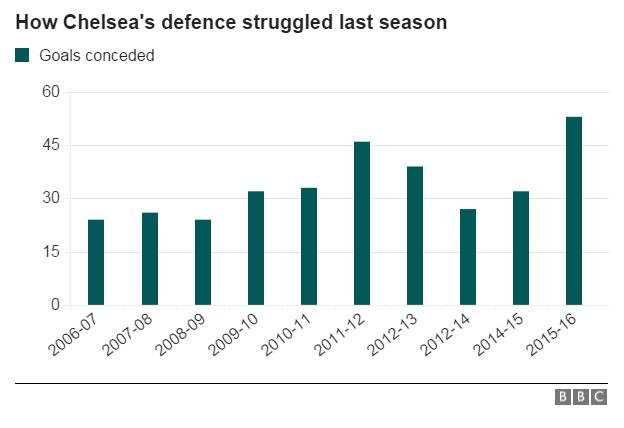 And if resolving their defensive issues is a priority, they have just the man in Antonio Conte, whose arrival in 2011-12 ended Juve's nine-year wait for a title. 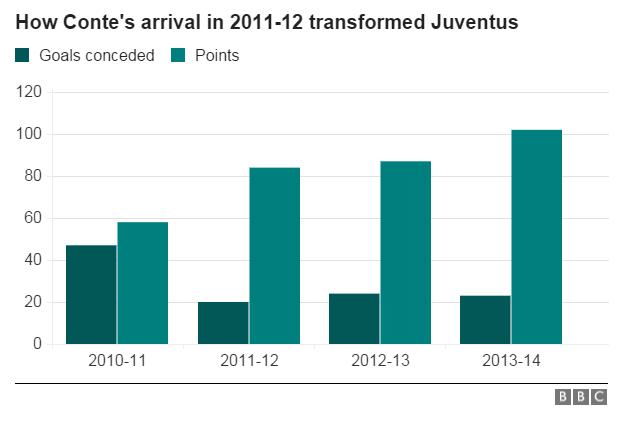 However, he will have to achieve it without the experienced unit of goalkeeper Gianluigi Buffon and 'the BBC' - defenders Andrea Barzagli, Leonardo Bonucci and Giorgio Chiellini - which he inherited both at Juventus and with Italy.

That focus on defensive solidity continued this summer, with Conte's Italy conceding twice in five matches at Euro 2016.

History suggests the appointment of Jose Mourinho as their club's new manager could be both good news and bad news for Manchester United fans.

The good news is there is no surer guarantee of being Premier League champions in one of the next two seasons than appointing the Portuguese, with success in his second year a common theme from every club he has been at.

The bad news is what might happen after that. Just ask Chelsea fans. And don't expect him to still be at Old Trafford for a fourth season.

How do you think Man Utd should line-up for the 2016/17 season? Pick your XI - and then share it with your friends.

At the appointment of their new manager, Southampton's executive director of football Les Reed said it was the club's aim to "repeat and improve on our performances in the Premier League".

If Puel can replicate the work he did at former club Nice last season then that is guaranteed, since the French side had a remarkably similar season to the Saints.

Saints fans can also expect Puel to continue the club's trend of giving young players a chance, with his Nice side one of the youngest in Ligue 1 last season. Good news for the likes of James Ward-Prowse and Matt Targett, who featured under Ronald Koeman before he to take over at Everton.

Perhaps best known in England for Italian side Napoli's Champions League clashes with Manchester City and Chelsea in 2011-12, the Watford owners will hope Walter Mazzarri can have a similar impact to the one he had in Naples.

He took Napoli from 12th to second in Serie A in four seasons, after more modest success at Reggina and Sampdoria. However, a more recent spell at Inter saw him sacked after a disappointing start to his second season in charge.

Strikers Troy Deeney and Odion Ighalo, in particular, could benefit under his tutelage.

After scoring just once in 16 games for Fiorentina in the first half of the 2008-09 season, striker Giampaolo Pazzini joined Mazzarri's Sampdoria and scored 11 goals in his first 12 games for the club, winning his first cap for Italy as a result.

Uruguay striker Edinson Cavani scored 34 goals in 109 league appearances for Palermo before joining Mazzarri at Napoli, where he scored 78 goals in 104 league games under the Italian.

Deeney managed 13 in 38 last season in the Premier League, while Ighalo scored 15 in 37 appearances. The latter was on target only twice in his final 18 league games of the season, though, so there is plenty of room for improvement under Mazzarri.

With Everton scoring the same number of goals as his former club Southampton in the Premier League last season, it is in defence that new Everton manager Ronald Koeman will be expected to have an impact.

It will be interesting to see if the Dutchman also instils the same tactical approach - a love of crossing and a distinct lack of dribbling - at Goodison Park that he did at St Mary's: the Saints crossed the ball more than any other side in the Premier League last season, while only West Brom ran with it less.

A regular supply of crosses into the box could please Romelu Lukaku, since only four of the other 22 forwards who had at least 10 headers at goal in the Premier League last season were more proficient in the air than the Belgium international.

Midfielders Ross Barkley and Gerard Deulofeu might not enjoy Koeman restricting players' freedom to run with the ball, however, as the two of them were among the top 15 most frequent dribblers in the Premier League for players who made a minimum of 19 appearances.

The new Sunderland manager has said the situation at the north-east of England club reminds him of when he took over at Everton in 2002, with the Black Cats consistently finishing in the lower part of the Premier League.

They scored as many league goals last season as Everton did in any of their first four seasons under Moyes, so if he is to lift the club above their annual struggle against relegation, sorting out the porous defence will be how he achieves it.