A new midweek Premier League show fronted by Gabby Logan has been added to the BBC's extensive football coverage for the 2016-17 season.

Live text on the BBC Sport website will cover every Premier League match, as well as international, European, Football League and women's action.

There will also be the return of FA Cup coverage across the BBC.

The Premier League Show will feature in-depth interviews with players, broadcast from the National Football Museum in Manchester.

Gary Lineker will meet Liverpool manager Jurgen Klopp for the first programme, which will be aired on Thursday, 25 August at 22:00 BST.

Lineker will also return as host of Match of the Day.

In December, Lineker tweeted that he would present the first programme of the new season in his underwear if his home-town club Leicester City won the Premier League. Claudio Ranieri's men were crowned champions on 2 May.

Viewers will have to wait until Saturday though to see if the former England striker keeps his promise. 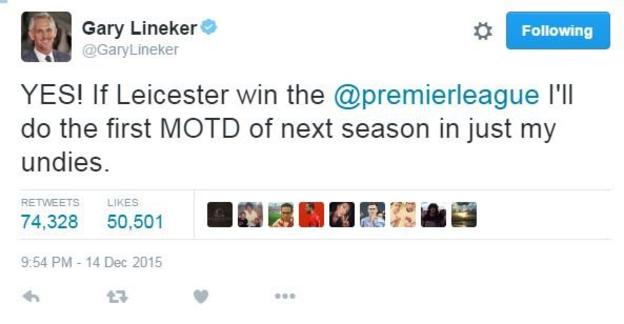 BBC coverage will also include:

New lead executive for BBC football, Steve Rudge, said: "As excitement builds towards the new football season, we are delighted to announce our extensive offering which now includes the new midweek magazine programme.

"Last season, 64% of fans followed the Premier League on the BBC only, highlighting our ability to unite the nation via our dedicated football service.

"This season will see the BBC deliver an unrivalled multiplatform offering which allows audiences to have the latest news and insight 24/7, wherever and whenever they wish."