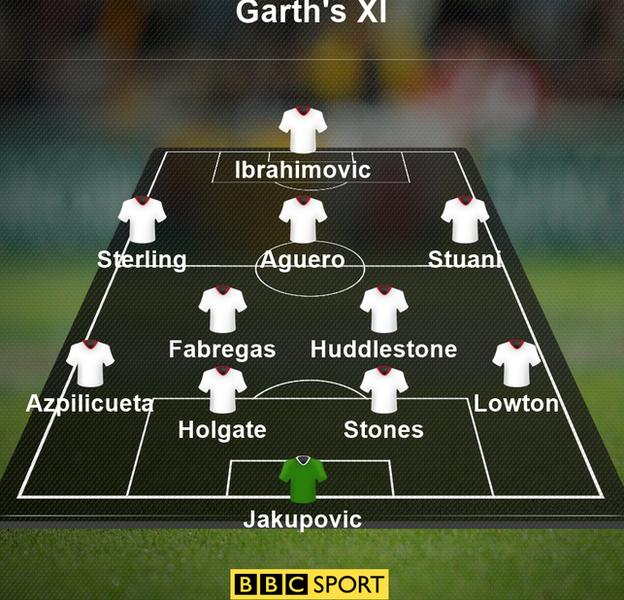 After just two weeks of the Premier League season there are only four teams left with a 100% record.

Manchester City, Manchester United and Chelsea have all started in excellent form, while Hull City have surprised many by claiming two deserved wins.

Everton collected their first win of the season with success at West Brom while Burnley stunned Liverpool and Middlesbrough claimed the derby spoils with victory over Sunderland.

Here is my team of the week:

Eldin Jakupovic's save from Gylfi Sigurdsson was sensational.

How he got his fingertips to the ball in order to push the shot on to the bar, I will never know. In real time I never realised Jakupovic had actually made the save but the replay provided conclusive proof that, without the keeper's heroics, it would have been a certain goal.

These are extraordinary times for Hull City and no-one knows what the future holds for the players or their caretaker manager. However, six points from their first two Premier League games and a clean sheet away from home says volumes for the goalkeeper and the spirit within the team. Great all-round performance.

If you blinked, you would have missed it. It was the most superb first-time pass from Cesar Azpilicueta to Cesc Fabregas that set the ball rolling for Chelsea's equaliser at Watford.

The full-back just loves to get involved in the action down Chelsea's left flank and was part of the phase of play that set Fabregas free to instigate Chelsea's comeback. It's not often you see a full-back play a forward pass like an attacking midfield player.

This was a big result for Chelsea and an even bigger one for manager Antonio Conte. The Italian knows all about winning titles in Italy and, by the looks of things, has his eyes firmly fixed on the Premier League title. He has been very astute, made very few changes from the team who downed tools under Jose Mourinho, and Azpilicueta seems central to his plans.

Well, it seems the celebrated song by Everton fans "Money can't buy you Stones" wasn't true after all. Pep Guardiola's audacious £47.5m signing of the centre-back for Manchester City has put paid to that.

However, what I have noticed already in the very short time Stones has donned City's sky blue shirt is he is far less inclined to take the ridiculous risks he was prepared to take at Everton under Roberto Martinez.

It would appear Guardiola has insisted Stones concentrates on what is in the best interest of the team and not himself. His performance against Stoke was outstanding and he looks like a player who is carrying out the instructions of his manager and not just what makes him look good.

What is it about Barnsley that makes them keep producing top-class defenders?

It was Mick McCarthy who first brought my attention to the famous Yorkshire club, then John Stones and now Everton's Mason Holgate seems intent on continuing this amazing sequence. The youngster was very impressive against West Brom, looks quick, tall and versatile and appears to be worth every penny of the £2m the Toffees paid for him.

Everton boss Ronald Koeman was a world-class defender, although not from Barnsley! If he can produce the authority and resilience of McCarthy and confidence of Stones in Holgate then he will be a sweet purchase.

What happened to Liverpool? Last week, I said that if they didn't replace Alberto Moreno at left-back they would get relegated. I make no apology for the exaggerated remark because the point needed to be made. However, putting square pegs in round holes or, to be more precise, James Milner in that position does not solve the problem either.

Matthew Lowton stuck to his task brilliantly, forcing Milner to come in on his right foot on numerous occasions. A club like Liverpool should not be struggling in this department; neither should they be losing to teams like Burnley.

Lowton's performance, along with the entire Burnley defence, required courage, which used to be a minimum requirement for Liverpool players under managers such as Bill Shankly and Bob Paisley. It seems to me that Jurgen Klopp could do with showing a little courage himself and put an end to Liverpool's Jekyll and Hyde character.

I don't normally pick a player in my team of the week who is on the pitch for only 18 minutes. But when a substitute comes on the pitch and has such a profound effect on the game, you have to acknowledge their contribution.

Cesc Fabregas must have left Watford fans utterly bemused by what they saw at Vicarage Road. The Spaniard's first touch found Eden Hazard in space and his shot resulted in Michy Batshuayi's tap-in. He then threaded the most exquisite through ball between Craig Cathcart and Sebastian Prodl for Diego Costa to score the winner.

That said, what the already booked Costa was actually doing on the pitch at the time after such a blatant dive earlier in the game was a complete and utter mystery to me.

How long will the Hull City hierarchy leave their players and caretaker manager hanging? Mike Phelan can only just about field a team, but these boys are fighting like Tigers.

In amongst that tenacity is Tom Huddlestone, who was immense against a Swansea side who seemed to lose their nerve. Huddlestone quietly carved Swansea to pieces with his beautiful precise passing. In fact, Huddlestone strikes a ball like Ken Rosewall's backhand slice. You think it's going to drift out of play but it always seems to drop on the baseline.

I don't think we'll see a better strike all season than Cristhian Stuani's first against Sunderland - the ball flew past Vito Mannone.

Until that point, either side could have won the game. I must say, for a newly promoted side, I thought Middlesbrough looked more interesting in possession but Sunderland remained unconcerned until Stuani unleashed an Exocet missile.

If that didn't rip the heart out of Sunderland then what followed certainly did. Middlesbrough put together the most delightful string of passes that seemed to hypnotise Sunderland and, in the process, allow Stuani to apply the finishing touch to their winning goal. What a way to open your Premier League account!

What did Ryan Shawcross not understand?

The referees' new directive this season could not have been clearer - any holding in the penalty area will be penalised. The Stoke City centre-back seemed to completely disregarded the warning and handed Manchester City and Sergio Aguero in particular the perfect gift.

The infringement provided the catalyst for one of the most comprehensive demolition jobs I have seen for some time. Aguero is once again on cue for another 25 goals this season. If the Argentine were to reach that incredible landmark for the fifth consecutive campaign we may have to consider him Premier League player of the decade, never mind the season.

For the second consecutive week I have seen Raheem Sterling run the opposition ragged and play himself into my team of the week.

Last week it was Sunderland who got the runaround but this week it was Stoke. I totally agree with Phil Neville's MOTD analysis - that the player is starting to look good under Pep Guardiola but needs to add goals to his game.

Sterling has enormous potential but lacks belief in his own ability. Guardiola knows the ingredients that make football superstars, having managed his fair share at Barcelona and Bayern Munich. The big question is can he turn Sterling into one?

How good and imposing does this guy look in a Manchester United shirt?

That's the second time this season that Zlatan Ibrahimovic has attacked the ball as well as the defender in order to score the perfect headed goal. He did it to Leicester City's Wes Morgan in the Community Shield and again against Southampton's Jose Fonte, who had a fantastic European Championship, by the way.

Most centre-forwards find it difficult to attack the ball and the man at the same time but not Zlatan. The former Sweden international has buried both defenders in the process.

If Ibrahimovic carries on like this, centre-backs are going to need security!