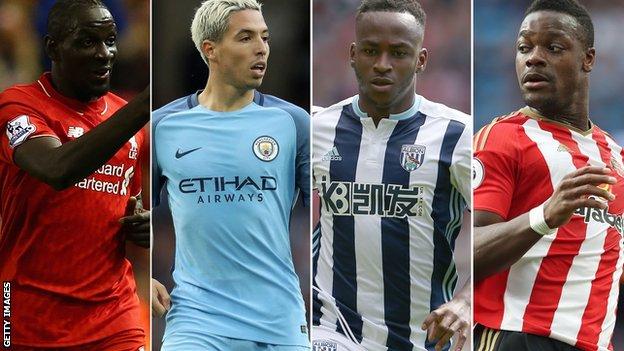 The transfer window closes in England at 23:00 BST on Wednesday and already the rush has started to get the last-minute deals in place - with clubs and players attempting to secure their immediate future.

Manchester United's £89m deal to bring France midfielder Paul Pogba back to Old Trafford from Juventus set a new transfer record and millions more will be spent around the Premier League before the close of business.

So which players are worth keeping an eye on as the seconds tick down to the end of this summer's transfer dealings?

Wilshere's exclusion from England's squad to face Slovakia has focused his mind - and after only 141 minutes of action last season, a poor Euro 2016, and just 37 minutes as a substitute this season it is time for a fresh start.

There is no way Arsenal manager Arsene Wenger will let the 24-year-old midfielder leave permanently as he remains potentially one of England's finest talents, but he simply has to have games and there is no sign of him getting them for the Gunners at present.

There will be no shortage of phone calls on this one - but be sure both Wilshere and Arsenal will be choosing his next club carefully. A move abroad is possible.

The 27-year-old had an outstanding Euro 2016 as hosts France reached the final, only to lose to Portugal - and he has spent the weeks since making it clear he wants bigger and better things than a stay in the Championship with Newcastle United.

As yet, no firm offers have materialised with potential buyers put off by Newcastle's £35m price tag for the powerful box-to-box midfielder.

This may be a case of "buyer beware" with potential suitors unsure about whether they are getting the player who starred for his country in the summer or the one who was abysmal as his club were relegated from the Premier League last season.

Sissoko, however, is a real talent and expect more interest before deadline.

It's that time of the year again - will Berahino stay or go?

The 23-year-old appears to have been standing by the exit door at West Brom for 12 months after his infamous tweet saying he would never play for Baggies' chairman Jeremy Peace again after a move to Tottenham failed to materialise.

Once again there was talk he was making his farewell appearance when he came on as a substitute against Middlesbrough on Sunday - but tweets from a holiday and another saying he is looking forward to playing with new West Brom signing Nacer Chadli suggest he is staying put again.

Sunderland manager David Moyes personally vetoed an £18m bid from Everton for the powerful central defender, who has been outstanding since his £6m move from Lorient in January, despite the Ivory Coast international being keen on the move.

The Toffees remain interested and will try their luck again - and will perhaps hope Moyes relents as deadline approaches.

Everton manager Ronald Koeman insists the 25-year-old Republic of Ireland midfielder is not for sale but rumours persist that he will leave Goodison Park if they get an offer of around £20m - or can perhaps be used in another deal, for Moussa Sissoko perhaps.

McCarthy's stock has fallen after a fine first season at Everton as his place as Gareth Barry's midfield partner has been taken by summer signing from Aston Villa Idrissa Gueye, who has made an outstanding start.

He will not want to spend time on the sidelines - and he appears expendable if Everton need leverage in the market.

The 27-year-old Ivory Coast striker has had a miserable time at Manchester City since a £28m move from Swansea City in January 2015.

This does not mean Bony would not be an attractive proposition after proving he could get goals in the Premier League at Swansea.

The end of one of the most ill-judged ventures into the transfer market in Liverpool's history is coming to a close - with Balotelli surely on the way out after just four goals in 28 appearances since his £16m move from AC Milan in August 2014.

Balotelli's loan back at AC Milan last season did not work out and he has been trawling the market looking for a move all summer after Reds boss Jurgen Klopp made it clear there was no way back at Liverpool.

Nice in Ligue 1 looks his best option but there is always the possibility of a last-minute surprise and Palermo have also been linked with an interest in taking him back to Italy.

Nasri is another player who appears destined to be on the outside looking in at Pep Guardiola's brave new world at Manchester City.

The 29-year-old, who made an appearance as a substitute in Sunday's 3-1 win against West Ham United, is gifted but inconsistent and Guardiola is looking elsewhere for his midfield options.

Nasri still has a fine reputation, though, and there has been strong interest from La Liga with Sevilla, who can offer Champions League football after winning the Europa League final against Liverpool and Besiktas in Turkey.

The powerful 28-year-old Algeria forward appeared to be saying his farewells to Sporting Lisbon after he left the pitch in tears at the end of the meeting with Porto at the weekend - and Leicester will hope he has.

Slimani, an international colleague of Foxes forward Riyad Mahrez, has scored 33 goals in 44 games for Sporting since the start of last season and Leicester see him as a perfect addition to an attack also containing England striker Jamie Vardy.

The Portuguese side will be driving a hard bargain for one of their prize assets, however, and have no intention of budging from a valuation of around £35m.

Sakho's Liverpool career has taken a nosedive, with manager Jurgen Klopp telling the defender, who was sent home early from the club's tour of the United States for indiscipline, including interrupting the German while he was conducting an interview, he can go out on loan.

The 26-year-old is free to resume his career after allegations he failed a dope test last season were dismissed - but it will not be at Liverpool.

Sakho has already turned down loan moves to Stoke City and West Brom, but such is Liverpool's insistence that he needs to move to get games that a revival of these offers before the deadline cannot be ruled out.

Take part in our new Premier League Predictor game, which allows you to create leagues with friends.