The revamped Checkatrade Trophy has begun with record low attendances, managers named as substitutes and a 15-year-old needing the permission from his headteacher to play in the competition.

In a bid to revive what was the Johnstone's Paint Trophy, League One and Two clubs voted in favour of expanding the competition to add Premier League and Championship development squads on a one-season trial basis.

Organisers have also introduced a group-stage format this season, rather than the straight knockout tournament that existed in previous years.

However, the low attendances suggest work need to be done to convince fans to turn out in force. Take a look at the figures below:

While many fans appear to need some convincing, however, the format has won support - Everton's development squad manager David Unsworth was among those citing the benefits to young players.

BBC Sport has contacted the EFL for its take on the competition's opening night of action, but it declined to comment.

Fans of many clubs have shown their discontent by using #BTeamBoycott on Twitter, which was trending on Tuesday night.

Meanwhile, the person behind the competition's sponsor's Twitter account responded to a number of tweets directed at them, including the one below. 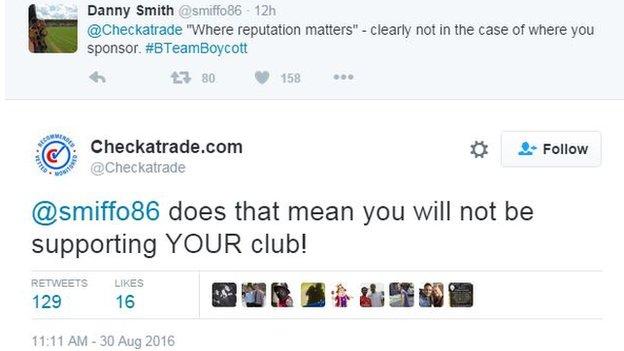 Three years and three months since officially retiring from playing, 43-year-old Wycombe Wanderers manager Gareth Ainsworth stepped out on to a football pitch for the 601st time when he came on against Northampton on Tuesday.

Facing an injury crisis and with his side 2-0 ahead, the former QPR midfielder came on as an 85th-minute substitute and set up his side's third goal to help end Northampton Town's 29-match unbeaten run.

Exeter boss Paul Tisdale was also a substitute, alongside 15-year-old Ethan Ampadu, but he chose not to come on during his side's 4-2 defeat at Oxford.

'Excuse me, can he come out to play?'

Ampadu was not the only 15-year-old involved on Tuesday.

Luton named striker Connor Tomlinson on the bench for their trip to Gillingham - but only after seeking permission from his school.

That question was not in vain, as Tomlinson, at the age of 15 years and 199 days, became the youngest first-team player in the club's history in a 2-1 win.

Another 15-year-old, Emeka Obi also made his debut for Bury. Born in June 2001, he made a late appearance in a 4-1 win over Morecambe.

What do supporters think?

BBC Sport's Simon Stone was at Bolton to watch the League One side lose 2-0 to an Everton development squad.

Toffees fan Tony Elston claimed a lot of Everton supporters did not realise the game was happening but welcomed the changes to the tournament.

"The way the competition is structured is the reason I am here, because I want to see how our young lads do against a League One team in a competitive environment," he said.

In sharp contrast, Bolton supporter Nigel Yates said the game was "absolutely meaningless" to his club.

"It is ridiculous really," he said. "When you consider the teams Premier League teams put out for League Cup and FA Cup ties, maybe the authorities would be better looking at doing something with those competitions rather than messing about with a competition that is supposed to be for Leagues One and Two.

"I am here because I am a Bolton fan. I support the club through thick and thin and I wouldn't have missed the game. But the way they have messed about with this competition has made the whole thing a joke."

"Maybe it will catch on," he said. "It might work and become exciting. We have never done it before."

Everton development squad manager David Unsworth said he was delighted that his players are able to compete.

"The boys are buzzing," he said. "More than they would have been after an Under-23 game. It was really important we entered this competition, come to places like this and experience a different kind of football."