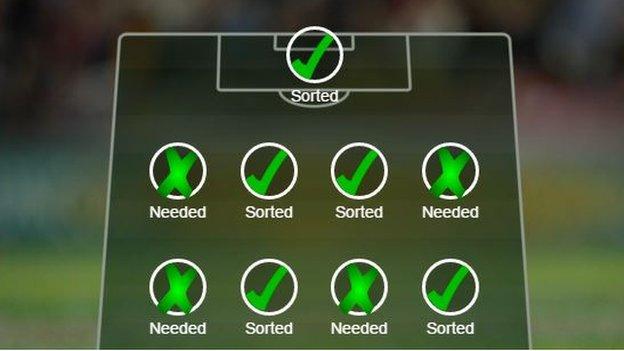 Are you happy with the state of your club's squad, or are there positions that should have been strengthened during the transfer window?

More than £1bn was spent during the transfer window, but that is not to say all fans are delighted by the state of their squads.

We want to find out which fans look at their squad and can't see a single area of concern, which fans have concerns over a position or two, and which fans would happily bring in a completely new set of players.

But we need your help.

What we want you to do is find your team from the list of Premier League and Scottish Premiership clubs below, follow the link, and then use the team selector. However, rather than choosing a starting 11, you will simply be putting a tick or a cross for every position.

Think your first-choice keeper is fine - put a tick there.

Worried about the right-back - use a cross.

Think you've got one great striker but lack back-up or an alternative, put a tick in one attacking position, a cross in the other. You get the idea.

We will then analyse the data to find out which fans are the most content, which would make most changes and which individual positions are a cause for concern at clubs.