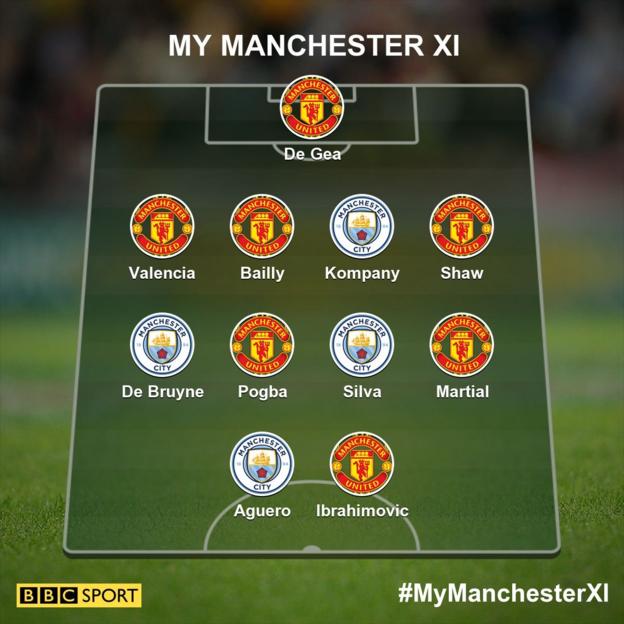 There was no place for England and Manchester United captain Wayne Rooney in a combined Manchester XI chosen by BBC Sport readers.

More than 100,000 people chose their teams this week, with Rooney only the 18th most popular selection, just making the bench.

Seven United players made the combined team, picked in the lead-up to Saturday's Manchester derby at Old Trafford (12:30 BST kick-off).

Rooney has scored a record 11 goals in Manchester derbies - but he did not make the starting XI chosen by BBC Sport readers.

Managers of club and country - Jose Mourinho and Sam Allardyce - are split on his best position, and so were you.

Rooney was picked by more than 19,000 people, of whom just over 4,000 wanted to see him start as a forward. The remainder picked him in midfield.

Instead the suspended City striker Sergio Aguero (80,000) and new United number nine Zlatan Ibrahimovic (86,000) were chosen to play up front in the most selected formation of 4-4-2.

United youngster Marcus Rashford was chosen up front by 14,500 people (another 9,000 picked him in midfield), while City's own young talent Kelechi Iheanacho made just 1,800 teams as a striker.

Stones unlucky to miss out

He may have cost City £47.5m this summer but there was no place in your combined team for John Stones at the back.

Stones was actually the fourth most-popular defender with 43,000 selections but had to make do with a place on the bench as City captain Vincent Kompany (65,000) and new United signing Eric Bailly (70,000) were picked most in the centre of defence.

The world's most expensive footballer would expect to walk into any side - and Paul Pogba certainly did with your teams.

The £89m signing from Juventus was named in 94,000 teams, the most selected outfield player.

Manchester City playmaker Kevin de Bruyne was also popular, with 84,000 picks, with David Silva (60,000) and Anthony Martial (34,000) rounding off the team. All those figures include them being picked in forward positions.

More people actually picked Armenian Henrikh Mkhitaryan (30,000) in midfield than United team-mate Martial (29,000), but the Frenchman was the most popular choice to play on the left of a four.

Raheem Sterling was the 14th most popular player overall with 27,000 picks in all positions.

Only one choice in goal

With Joe Hart leaving Manchester City this summer for Torino, Spanish keeper David de Gea was the only real contender to play in goal for your combined team.

It's not too late to have your say.

Use our squad selector and pick what you think is the best the two squads have to offer and then share it with your friends.

Who would be in your combined Manchester XI? Pick your XI - and then share it with your friends.