Alexis Sanchez salvaged a point for Arsenal from their limp Champions League opener at Paris St-Germain.

Edinson Cavani glanced PSG ahead after 42 seconds and should have had a hat-trick before half-time, firing wide after rounding David Ospina before slipping to fluff a simple finish.

Sanchez rifled in the rebound from Arsenal's first shot on target.

Alex Iwobi might have had a late Arsenal winner before Olivier Giroud and PSG's Marco Verratti were sent off.

Substitute Giroud was brought on to enliven a tame attacking display and picked up two yellow cards in his 27 minutes, the second for an altercation in which Italian midfielder Verratti also picked up a second yellow.

The Gunners were often exposed by the pace of Cavani, Angel di Maria and Serge Aurier and relied on their Colombian goalkeeper Ospina - preferred to Petr Cech - to keep them in it.

Iwobi's low shot was tipped away by Alphonse Areola after Sanchez's equaliser, while PSG would have had a 94th-minute winner had defender Marquinhos not wastefully headed wide from close range.

Anything more than a point for Arsenal would have been harsh on PSG, who outperformed their Premier League opponents but failed to take their chances.

In the other match in Group A, Swiss side Basel were held to a 1-1 draw at home to Ludogorets Razgrad of Bulgaria.

Blanc had just secured a second successive domestic treble - PSG won the league by 31 points - but failure at the Champions League quarter-finals for the third year in a row led the owners to show their ruthless side.

The Qatar Investment Authority bought a controlling stake in the French club in May 2011, and have since financed a net spend of almost £500m on transfers, but the return they crave - success in Europe's premier club competition - has eluded them.

Emery has already had to fend off questions about pressure and expectation after losing one and drawing another of his first four games - and this will feel like an opportunity missed.

Arsenal produced some slick interplay in front of goal but failed to produce many dangerous moments and looked shaky at the back. By the time Sanchez brought them level by firing home after Iwobi's shot was parried out, they could easily have been two or three behind.

How did Ospina do?

Cech was dropped for Ospina in Arsenal's first two Champions League games last season but was reinstated after the Colombian scored an own goal from a corner in a 3-2 home defeat by Olympiakos.

In the first half Ospina made a brilliant recovery to tip over as Angel di Maria's corner momentarily threatened a repeat of that calamitous moment, but he had little chance of stopping Cavani's deft, glancing header.

After the break, as Arsenal struggled to improve, he continued to be unnecessarily exposed by sloppy play in front of him and was forced into making a series of blocks - perhaps the most crucial being to deny Cavani three minutes after the equaliser.

But it was not a totally convincing performance. When Cavani took advantage of an error by Nacho Monreal, Ospina was rash in coming off his line and lucky to see the Uruguayan shank his effort wide.

Beyond the selection choice in goal - Wenger said it was not his intention "to surprise" - Theo Walcott was left out of the squad with a minor injury described by the Arsenal boss as "very short term".

Arsenal manager Arsene Wenger: "We wanted to start at a high pace and after a minute we are 1-0 down. For 20 minutes we were outpaced, they started much better than us but we were resilient.

"We played much better in the second half, they dropped a bit as well. We pushed very high and were vulnerable to the counter attack but it's a good point for us.

"Away from home you have to battle up front and Alexis Sanchez did well. He was isolated at times and in the second half it was easier for him.

"I couldn't work out the red cards. Giroud swears to me that he did nothing at all. We will look at it again. I believe Giroud." 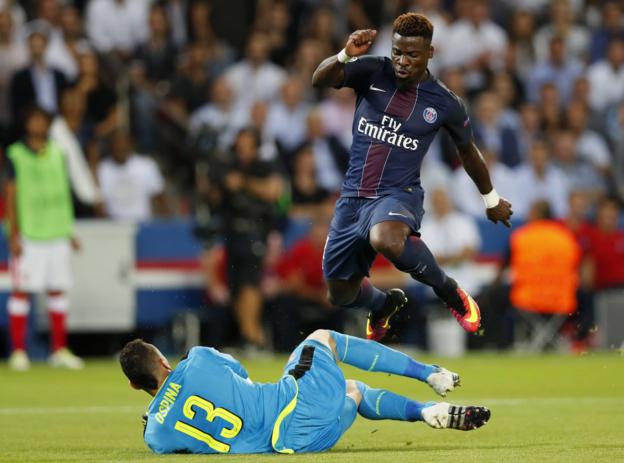 The Ivorian right-back delivered a beautiful cross for Cavani's goal from the first of many dangerous forward runs and was a solid performer at the back - only Adrien Rabiot was more successful in winning the ball back for the French side.

Arsenal return to Premier League action when they play at Hull in a 15:00 BST kick-off on Saturday. PSG play again in Ligue 1 on Friday in a 19:45 kick-off at Caen.

The Gunners' next Champions League game is at home to Basel on 28 September, when PSG play away to Ludogorets.