Well, the England manager's office at Wembley has been cleared again, after Sam Allardyce and the Football Association agreed to part ways on Tuesday.

As usual, bookmakers were taking bets on his successor before his leather chair* had time to cool.

A quick scan of the betting sites shows caretaker boss Gareth Southgate as favourite at 6-4 to turn his temporary role into a permanent one, while close to £10,000 has already been placed on Arsenal manager Arsene Wenger to take the England reins.

But what of the longer shots? BBC Sport looks at the great and the good, the familiar faces, the potential debutants and the downright daft. The bookies will take your money - we don't necessarily advise you give it to them.

(You can take your pick of the genuine frontrunners here.)

We think you can safely put this one into the "not a chance" box.

The former Manchester United boss retired in 2013 after 26 years in charge at Old Trafford and has since only managed a Great Britain and Ireland team in a charity match.

Having said that, there have reportedly been 30 bets of about £20 placed on the Scot to be the next England gaffer.

Surely those punters are just throwing money away?

Former Charlton Athletic boss Alan Curbishley has become a bit of a cult figure in the world of betting, despite not having held a managerial position since 2008.

"It has become a bit of a running joke to add him to the list whenever there is a vacancy," said odds checking website Oddschecker.

"Any time there is a sacking, his name crops up as a replacement but nothing has ever come of it."

Curbishley was interviewed for the England manager job in 2006 when Steve McClaren pipped him to the post.

The former Liverpool skipper, who retired from international football in 2014 having won 114 caps, has been earning his coaching qualifications while playing for MLS team LA Galaxy.

Gerrard told the Daily Telegraph in January 2016: "I am basically available from November, December 2016. Everyone in the football world will know I am available and hopefully I will be 75% into my coaching badges."

We assume "available" means he will be handing out his CV to anyone who will take it but with zero managerial experience so far, the England job might be a daunting introduction.

Cantona might at least want the job - he reportedly threw his hat into the ring after Roy Hodgson resigned.

But you might still be better holding on to your money.

The Frenchman has had little involvement in football since he retired in 1997 and with a track record like his, he doesn't really conform to the "whiter than white" reputation that former FA chairman Greg Dyke suggests the England manager requires.

As romantic an idea as this is, we can imagine the FA would rather choose someone with more time on their hands than Becks.

The former England captain retired from international football in 2009 after making 115 appearances for his country.

A busy man, with humanitarian work, clothing lines, red carpet appearances on the rota already, plus a potential MLS franchise to set up, does he have the time - or the need - to manage his country?

Well, he hasn't ruled it out, eventually.

In June, Beckham said: "So many people have turned round to me and said 'why don't you want to be an England manager in five years, 10 years? That might change at some point in the future.

"I might wake up one morning and think 'maybe I could be a good manager'."

As usual, people on social media had plenty to say about the England job and this guy seems to be a popular choice.

The fictional England manager played by Ricky Tomlinson is always a fans' favourite. 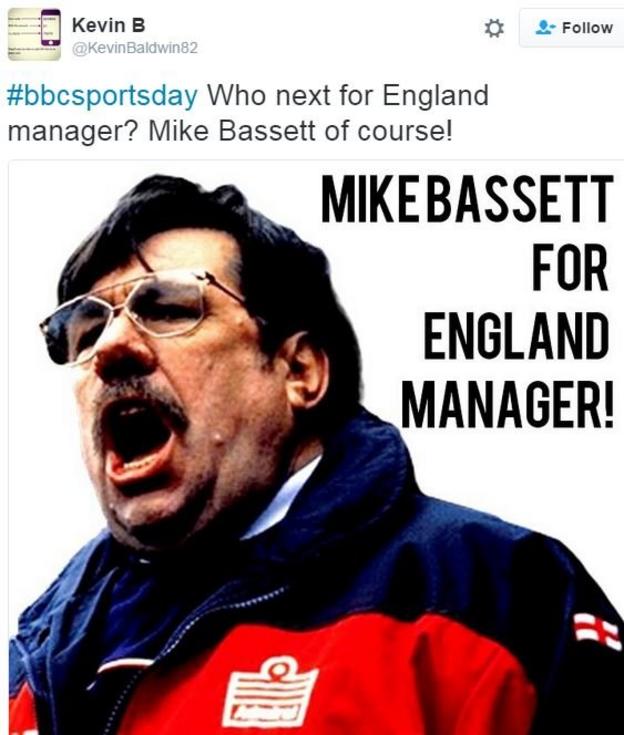 *We are not actually sure if Big Sam's seat was leather - he just looks like a leather chair kind of man...