Premier League football returns after the international break with a mouthwatering line-up.

Champions Leicester travel to Chelsea to kick off the action on a Saturday on which leaders Manchester City face fifth-placed Everton and there is a London derby between Crystal Palace and West Ham.

The biggest game of this round of fixtures, however, comes on Monday as Liverpool take on Manchester United.

Here are some of the main talking points, as well as our guide of how to follow the action on the BBC.

Will Conte be laughing again?

After one win in four league matches for Antonio Conte's Chelsea, some bookmakers stopped taking bets on the Italian being the next Premier League manager to lose his job. He laughed that off in his news conference on the eve of Leicester's visit.

Saturday's game (at 12:30 BST) pits Chelsea midfielder N'Golo Kante against his former side - and the Foxes are missing the Frenchman, says captain Wes Morgan.

Morgan says what Kante did for the Foxes last season was "incredible" - he averaged 4.7 tackles and 4.2 interceptions per game, the highest in the Premier League in both categories.

His role at Chelsea has differed, however, with a greater emphasis on passing, playing 65 per game on average as opposed to 39 last season.

Next up for Leicester is a Champions League tie against FC Copenhagen - their previous two European matches have been preceded by 4-1 defeats in the Premier League.

Former England midfielder Jermaine Jenas told BBC Radio 5 live: "I think Conte will be happy with how things have started to develop but he is clearly not comfortable with what he is seeing in a back four. He's been going with three at the back and two midfield enforcers." 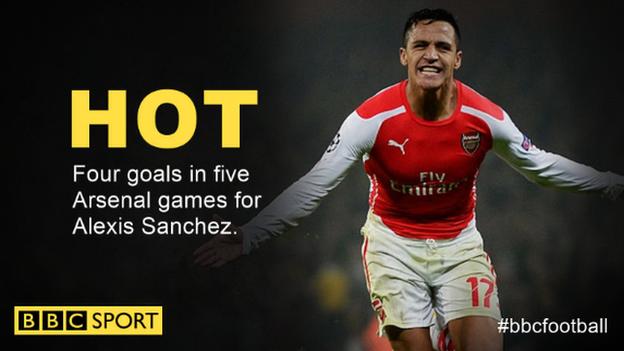 After a 35-year journey to the Premier League, which began at Ohio Bobcats, Bob Bradley has promised a "fresh start" at Swansea, who are 17th in the table.

The Frenchman this week reflected on the "negativity" sweeping Emirates Stadium after their home defeat by Swansea in March, adding: "It is a virus that travels very quickly and goes away very slowly."

The Gunners have not lost since the opening day, have kept four straight clean sheets and have Alexis Sanchez back in form with four goals in five games.

But the Chilean flew about 15,000 miles during the international break. Is he due a rest for Saturday's visit of the Swans (15:00 BST)?

Former England midfielder Leon Osman on BBC Radio 5 live: "Bradley was a surprise appointment for me. I thought he'd maybe come in at Championship level but I wasn't in the interview room. Swansea have found it difficult to get back to what they were. Are they still that passing team?"

Sergio Aguero has scored 28 goals in his past 28 Premier League appearances for Manchester City. But, after flying roughly the same distance as Sanchez, will he start a potentially tricky home match against Everton on Saturday (15:00 BST)?

Aguero played 163 minutes, nursed a calf complaint and missed a penalty as Argentina drew with Peru and lost to Paraguay during the international break.

City boss Pep Guardiola said the 28-year-old and fellow forwards Kevin de Bruyne and Raheem Sterling are "much, much better" after recent injuries.

But will they play as the Blues look to bounce back from a first defeat of the season at Tottenham, or will they be saved for a Champions League trip to Barcelona?

Everton are fifth but without a win in two league games, and manager Ronald Koeman said: "We know we can be better."

Osman: "No-one would be surprised if City were beaten at the Nou Camp, so if the Everton game doesn't go well they are on a bad four-game streak and people start asking questions - is there a mini-crisis? That type of thing starts to breed into the club."

Who will be the last winless team?

Stoke and Sunderland face each other at the Bet365 Stadium on Saturday (15:00 BST) as the only winless sides in the Premier League.

But both have come close to notching that elusive victory in recent games.

Sunderland threw away a 2-0 lead to lose 3-2 at home to Crystal Palace on September 24, the same day Stoke conceded in injury time to draw 1-1 with West Brom.

Stoke manager Mark Hughes said the onus is on his side to be positive in a match "we need to win and feel we can win".

Sunderland counterpart David Moyes, meanwhile, said he will "find a way" to get three points.

Can Manchester United win at Anfield?

Both managers have called for calm among the fans at what could be the biggest game of the Premier League season so far.

But it could get heated on the pitch, too, in one of football's biggest rivalries, with plenty at stake as Liverpool host Manchester United on Monday (20:00 BST).

Jurgen Klopp's hosts are in red-hot form - having scored 12 goals in their past four games - while United have won only once in four league matches.

Jenas: "Liverpool are out-and-out favourites. I don't think Mourinho knows his best XI. You could pick Liverpool's team right now. You can't do that with United."

What are the weekend's fixtures?

What are the stats you should know?

And finally... who would you pick?

The impossible job? Probably. Use our shortlist and pick who you think would make the greatest combined post-war Liverpool-Manchester United XI.