Tottenham extended their unbeaten start, Sunderland's winless run continued and Bournemouth smashed six past Hull, maintaining a remarkable record of scoring five or more goals on each of the four occasions they have hosted the Tigers in the top two tiers.

Here, we take a look at the most interesting stats to emerge from the weekend's football.

What has happened to Joe Allen? The "Welsh Pirlo" has found himself in a more attacking role since moving from Liverpool to Stoke in the summer, and the switch is paying dividends for Mark Hughes.

Allen scored both goals for Hughes' side in their 2-0 victory over Sunderland - Stoke's first win of the season - to take his tally for the campaign to four. That equals his previous season's best, and does not even account for the fact he has also scored in both of his appearances for Wales this season.

Get him in your Fantasy Football team - as well as Nacer Chadli, for that matter, who has four goals in five games for West Brom after as many in his previous 33 for Tottenham.

The same applies to Charlie Daniels. The Bournemouth full-back's goal in the 6-1 demolition of Hull means the Englishman is now the most potent defender in the Premier League over the past two seasons.

And who would have thought Maarten Stekelenburg would get the better of Kevin de Bruyne and Sergio Aguero?

The keeper, who played in the 2010 World Cup final for the Netherlands, could not get a game at Fulham when he first arrived in England, and has spent the past two seasons out on loan.

But he seems to have found a home with Everton. He produced a superb display to repel Manchester City in his side's 1-1 draw at Etihad Stadium, including a double penalty save, a feat rarely achieved in the Premier League.

One player you might not want to be relying on for Fantasy Football points is Granit Xhaka.

Arsenal's Switzerland midfielder might have settled in well since joining the Gunners in the summer - including a spectacular strike against Hull last month - but his red card in the 3-2 win over Swansea on Saturday made him the most dismissed player in Europe's top five leagues over the past two seasons.

A confident start for Koeman

Ronald Koeman has wasted no time in making a positive impression since moving from Southampton to Everton in the summer.

The point earned in the draw at Manchester City means he has made the joint-best start to a Premier League season by an Everton manager.

That fine beginning to life at Goodison Park does not guarantee long-term success, however. Koeman shares the record with Roberto Martinez, whose side faded so badly that he lost his job after three seasons.

And Koeman's tally of 15 points is still well short of the best total amassed by a new manager at a Premier League club, a record held jointly by Carlo Ancelotti (Chelsea) and John Gregory (Aston Villa).

A miserable start for Moyes

At the other end of the manager-making-an-impact spectrum lies David Moyes.

Sunderland's new boss has overseen the fifth-worst start by any team to a Premier League season. 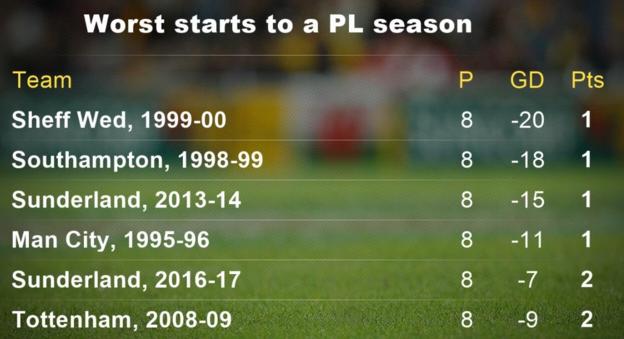 The Black Cats remain winless after eight games - a repeat of last season.

In fact, Sunderland are only the second team in top-flight history - after Bury in 1905-06 - to fail to win any of their opening eight league matches in consecutive seasons.

But there is still hope.

Of the four teams to have made worse starts to a Premier League campaign, only two - Manchester City and Sheffield Wednesday - were relegated.

And it is only three seasons since Sunderland made an even worse start and survived.

They couldn't, could they?

Sunderland could do with some of Tottenham's confidence and defensive solidity to get out of the mess they are in.

Spurs battled back on Saturday to earn a 1-1 draw at West Brom through Dele Alli's late equaliser. It means they are the only unbeaten team in the top flight - the first time they have avoided defeat in their first eight matches since Paul Gascoigne and Gary Lineker were in the team in 1990-91.

They have some way to go to match the longest Premier League unbeaten runs though...

Take part in our Premier League Predictor game, which allows you to create leagues with friends.