Leicester City stand one victory away from qualification for the Champions League knockout phase after beating Copenhagen at the King Power Stadium to make it three wins from three in their group.

Leicester's win was not without its anxious moments, with former Cardiff City striker Andreas Cornelius heading inches wide moments after the Foxes had taken the lead.

And it took a brilliant one-handed save from goalkeeper Kasper Schmeichel in the closing minutes to thwart Cornelius again and maintain Leicester's unblemished defensive record in this season's Champions League.

Leicester can now secure a place in the last 16 with a win in Denmark on 2 November, having already guaranteed at least a Europa League spot.

How far can Leicester go?

When Leicester's thoughts turned to their first Champions League campaign, qualification from Group G would have been regarded as a major success for manager Claudio Ranieri and his players.

But the Foxes may just fancy their chances of taking the dream journey a step further after becoming only the fifth competition debutants in Champions League history, after AC Milan, Paris St-Germain, Juventus and Malaga, to win their opening three games.

Topping the group would make life a lot easier in the last-16 draw as it vastly increases the chances of drawing beatable opponents when all logic - something, admittedly, they defied last season - suggests they would struggle against Europe's elite.

The King Power Stadium is a compact and atmospheric arena, swirling with noise, that is perfectly designed for European nights and making even the most illustrious sides uncomfortable.

If Leicester can keep up this form, and the likes of Mahrez, Jamie Vardy and Slimani can provide the threat to supplement the defensive resilience that won the Premier League, then there may be plenty of sides they can trouble.

England striker Vardy's work-rate and determination was not in question for a moment here but he is still searching for the elusive spark that brought him 24 Premier League goals in last season's title win.

He is not hiding away and is still tireless in his running - but he is now clearly a marked man by opposition made aware of his pace and threat with his deeds last season.

Vardy has now gone eight games without a goal - a decline that might be partly explained by the fact he is now providing support for £29m man Slimani, whereas last season he was, along with Mahrez, the focal point, with team-mates working for him.

Against Copenhagen, he was often seen on the flanks and played his part in creating the goal, crossing from the left for Slimani to head into goalscorer Mahrez's path.

Home fans certainly appreciated his efforts, which were rewarded with a standing ovation when he was replaced by Shinji Okazaki.

The 29-year-old hit a hot streak last season and did not stop scoring - Leicester and Ranieri will hope he does the same once he finds the target again. 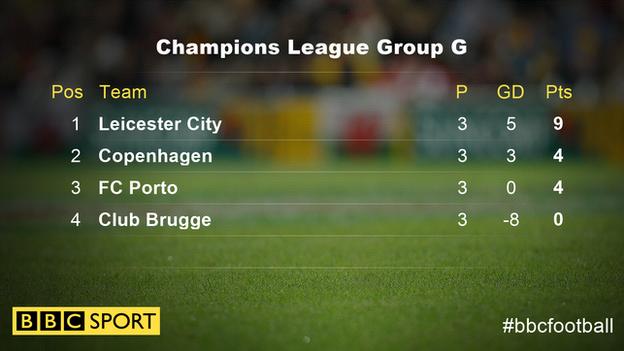 Leicester's flawless Champions League record provides a sharp contrast to their struggles for form as they defend their Premier League title.

In domestic football, Leicester have lost four of their first eight league games - more than they lost in their title campaign - and conceded 14 goals.

Leicester's defence still looked uncertain here, even at the set-pieces that were a strength last season, and it needed that magnificent save from Schmeichel here to secure the win.

Perhaps the Foxes' style is still more of a surprise to European sides than the Premier League rivals they punished last season. Maybe they are finding the rarefied air of the Champions League more to their liking than the pressure of defending the domestic title.

One thing is certain - there currently appear to be two Leicester City teams in existence.