There was no room for Sir Bobby Charlton or Eric Cantona - and Ian Rush and Kevin Keegan did not make the cut either.

More than 150,000 BBC Sport users picked their greatest combined post-war Liverpool-Manchester United XI, and there were obviously some agonising decisions.

Seven United players made the team and, as you would expect, there is quality all over the pitch - plus experience of more than 50 English league titles.

Former United goalkeeper Peter Schmeichel was selected in 75% of teams, making him the most popular player, with ex-Red Devils winger Cristiano Ronaldo the most-picked outfield player, featuring in 67% of teams.

George Best, another Old Trafford great - who played for the club from 1963-1974, was the third most-popular pick, selected in a wide range of different positions. 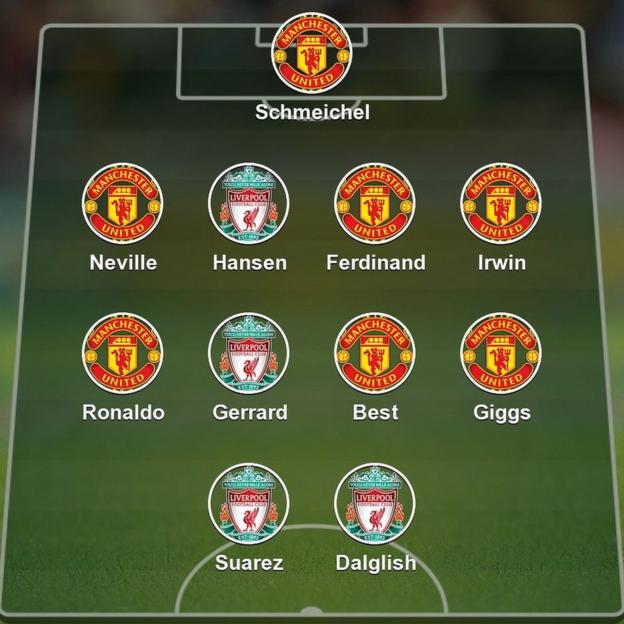 Suarez the most popular forward

Suarez left Liverpool for Barcelona in 2014 after scoring 82 goals in 133 appearances, and he was the most popular choice for one of the two forward positions - appearing in 48% of the total selections.

Best was the only member of United's 'Holy Trinity' of Best, Denis Law and Charlton, who helped United to their first European Cup victory in 1968, to make the XI.

Ronaldo was one of the most-picked players the in front two, but he was also a very popular choice in midfield so takes his place there.

Wayne Rooney is one of four United players to score 200 or more goals for the club, but of the 54 on the shortlist he was only the 39th most selected - making 5% of the selected teams. 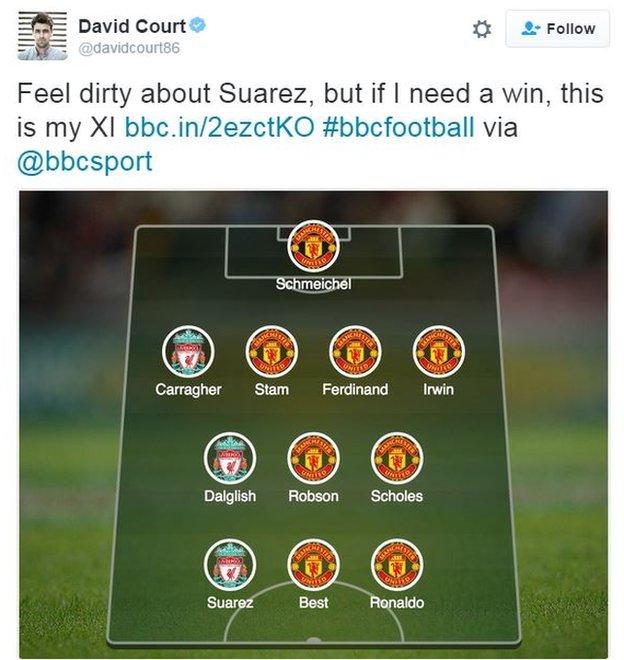 While users obviously had a very difficult time sorting out the midfield and attack, the defence seems to have been more clear-cut.

Alan Hansen, an ex-Liverpool central defender and former BBC pundit, was the most popular choice with 55%. He was part of a formidable defensive partnership with Mark Lawrenson - but there was no place for Lawro, who appeared in 18% of all selections.

The rest of the defence came from United - with Gary Neville (52% of choices) at right-back, Denis Irwin (47%) left-back and Rio Ferdinand (44%) claiming the other place in the centre of defence.

Ferdinand's nearest rival was former team-mate Nemanja Vidic, a five-time Premier League winner, who appeared in 35% of the teams.

Who made the bench?

It was a close race to make the final XI, with several big names having to settle for a place on the bench.

Cantona was the 12th-most selected player, appearing in 42% of teams, followed by Paul Scholes (39% of choices) and Vidic.

The final spot on the bench went to David Beckham, who appeared in 28% of teams.

Trying to select a combined XI of both sets of players gave plenty of people a headache.

Do you think differently? Don't worry - pick your team now.

The impossible job? Probably. Use our shortlist and pick who you think would make the greatest combined post-war Liverpool-Manchester United XI.