Liverpool went top of the Premier League for the first time under manager Jurgen Klopp with an emphatic victory over Watford at Anfield.

Sadio Mane's acrobatic header finally put the Reds ahead after a host of missed chances, before Philippe Coutinho drilled in a second from 20 yards three minutes later.

Adam Lallana crossed for Emre Can to nod home before half-time and underline the home side's clear superiority - and the story was much the same after the break.

Watford were abject and Liverpool masterful as Roberto Firmino tapped in a Lallana cut-back before the Brazilian turned provider and Mane slotted in a fifth amid slack defending.

Georginio Wijnaldum completed the scoring in the 91st minute with his first goal for the club, after substitute Daniel Sturridge had struck the bar twice.

It is the fifth time Liverpool have scored four goals or more in the league this season, and made them the top flight's highest scorers with 30 goals from their 11 matches.

But Watford's consolation through Daryl Janmaat means Klopp's side have only kept one clean sheet in the league this season.

After Manchester City slipped up at home to Middlesbrough and Arsenal were held by Tottenham, Liverpool's players knew victory would send them a point clear of Chelsea at the top of the league.

If there was pressure following the Blues' statement win - they defeated Everton 5-0 on Saturday - Liverpool certainly did not show any signs of suffering from it.

Rarely will the home fans have seen their side perform so dominantly. The fluid play of Coutinho, Lallana, Mane and Firmino carved out chance after chance, and while Watford were at times sloppy in possession, there was little they might have done better to resist Liverpool's 28 attempts on goal.

With the speed of the home side's passing and the slick interchanging of positions in attack, Watford simply could not live with Liverpool. Five different players scored in a ruthless performance full of confidence, rhythm and flair. 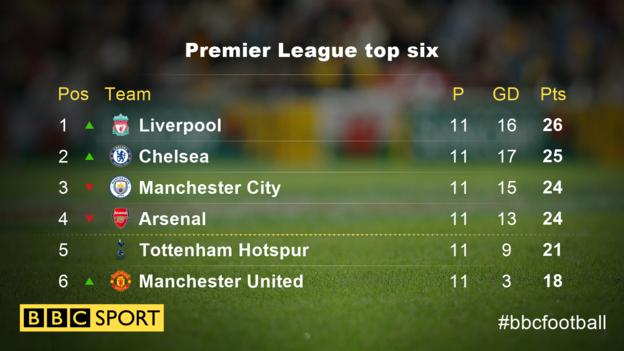 So who needs a striker?

Sturridge was without a goal in his past nine league games and, having come on to replace the excellent Lallana, the England international played as if he had a point to prove.

But no matter what he did, the ball just would not go in.

Twice he struck the woodwork, once with a fierce left-footed drive that crashed against the bar as he drove in on goal from the left, later with a dipping strike from outside the box that Costel Pantilimon brilliantly tipped on to the bar.

Sturridge should then have done better when cutting on to his left and firing straight at the keeper, but Klopp will have been impressed with his forward's performance in the 20 minutes he was allowed.

The German was clearly very angry about one thing though - how Watford's Janmaat was allowed to ghost into the box and slot home Nordin Amrabat's pass.

Even with his side coasting towards victory Klopp was barking instructions to his players. The message seemed to be: more pressure high up the pitch, more movement off the ball in possession. They were the key attributes in this impressive win.

Even though he missed what Klopp might have described as a perfect goal just before he was taken off to a standing ovation with three minutes to play, Coutinho was the outstanding performer in a stellar cast.

The Brazilian skied wildly over after Nathaniel Clyne launched himself into an interception on the halfway line, played a one-two with Firmino and cut back from the edge of the area.

That finish was lacking but of the minds and feet at work in front of the weary Watford defence, his were by far the quickest.

Liverpool have hit the Premier League summit and there can be no doubt whatsoever - Jurgen Klopp's team are real live title contenders.

The fact that there were five different goalscorers in Sunday's 6-1 win against Watford at Anfield sums up the strength and potency of a Liverpool side that has hit a red hot streak since that surprise 2-0 loss at Burnley in their second game.

Sadio Mane, Philippe Coutinho, Roberto Firmino and Adam Lallana have the pace, movement and threat to pose a danger to any side while captain Jordan Henderson has been a revelation this season.

Yes, questions remain about the quality of their defence and new goalkeeper Loris Karius but this current Liverpool teams carries a level of menace that has echoes of the Luis Suarez-inspired side that almost won the title in 2013/14.

And one more factor in the title equation.

Liverpool have already played title rivals Arsenal, Spurs and Chelsea away from home, claiming seven points with victories at Emirates Stadium and Stamford Bridge. No wonder confidence is high at Anfield.

It was a stunning display from Liverpool. It could have ended up double figures. They blew Watford away, and have blown away most teams this season.

They look like they're going to go close. The fact they have no European football and can recover between matches will help, too.

There is a different feeling now at Anfield. The expectation is back and the players are proving that is justified with their performances - week in, week out.

Liverpool, wow. The movement in those front players was incredible. They could have scored 10.

Liverpool manager Jurgen Klopp, speaking to BBC Sport: "When the result gives you the impression that it is easy there is a lot of hard work behind that. The result is wonderful and the performance is terrific.

"But Chelsea yesterday were not bad, Manchester City against Barcelona not bad, Arsenal great movement and Tottenham - oh my god. We need to be good.

"Good results and performances help confidence. We will send the players all around the world and hopefully they come back healthy for the big challenge of Southampton.

"There is nothing to celebrate in the moment - this is our responsibility to play well when you put on the red of Liverpool. It is all good until now."

Watford manager Walter Mazzarri: "You can lose at the home of Liverpool but we should not have lost like that.

"It has been a lesson for the future. This game has taught me many things, like the 2-0 defeat by Burnley.

"We will get better for next time and we will see a different performance after the international break."

On the injury suffered by keeper Heurelho Gomes, who was replaced by Pantilimon: "It is his knee, but I am not sure yet [how serious]. I am not sure if it's a twist or just a knock."

Shots on Target
Home17
Away8