Northern Ireland replaced Azerbaijan in second place in Group C thanks to an impressive World Cup qualifying win at a rain-lashed Windsor Park.

Kyle Lafferty fired home the opener in the 27th minute and Gareth McAuley headed in from a Chris Brunt free-kick to make it 2-0 before half-time.

Conor McLaughlin headed his first international goal before Brunt claimed his second goal for his country.

West Brom's Brunt was back in the NI team for the first time in 13 months, having missed Euro 2016 because of a serious knee injury.

"To score four goals and not concede any is a good result, especially against Azerbaijan," said Brunt. "They were flying high in the group."

Northern Ireland boss Michael O'Neill described the win as "huge" and praised the fans for their backing.

"The mood is very good, the players love playing here, the crowd were fantastic again and we can look forward to March now," he said.

O'Neill's side play Croatia in a friendly in Belfast on Tuesday before taking on Norway in their next qualifier on 26 March.

Azerbaijan were on the back foot for much of the game, but they threatened early in the second half when substitute Deniz Yilmaz was denied by the advancing Michael McGovern in the NI goal.

Germany maintained their 100% record with an 8-0 hammering of San Marino while the Czech Republic beat Norway 2-1 to go fourth. 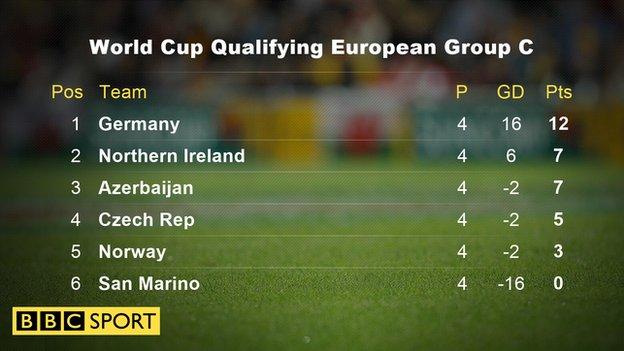 O'Neill seems to have got a few tips from watching Liverpool and Tottenham, as the high press was implemented with success.

Indeed, Azerbaijan were never able to settle on the ball, with Northern Ireland forcing their opponents into mistake after mistake.

The visitors boasted a record of no goals conceded in three qualifiers, but their defence crumbled under relentless pressure.

NI's passing, particularly in the first half, was crisp and accurate while the all-important finishing made this a performance to remember.

O'Neill usually prefers a lone target man in attack but, in the absence of Jamie Ward, he went with Kyle Lafferty and Josh Magennis as a front two.

It worked a treat, with Magennis working hard in the right channel while Lafferty occupied a central position.

Lafferty swivelled to drive home his 20th goal for Northern Ireland, showing that he belongs on the international stage despite struggling with Norwich.

O'Neill may revert to his favoured formation when Ward recovers from injury but at least he knows he has a tried and tested alternative.

Man of the match - Chris Brunt

After recovering from a clash of heads, Brunt showed what Northern Ireland have been missing for the past eight months.

A trademark free-kick was headed home by McAuley and he arrowed a shot low and hard into the bottom corner to complete an excellent display.

O'Neill's men play Croatia in a Belfast friendly on Tuesday and their next qualifier is at home to Norway on 26 March.

28 comments
Back to top
unknown